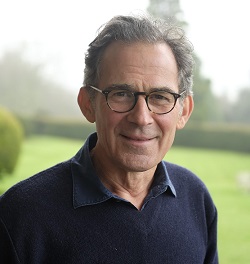 Example of Teaching
The direct path is a path of spiritual inquiry wherein one goes directly to truth, rather than through steps (also called the “progressive path”).

Being Aware of Being Aware (The Essence of Meditation Series)   The Nature of Consciousness: Essays on the Unity of Mind and Matter The Transparency of Things: Contemplating the Nature of Experience

Rupert Spira first came across the poetry of Rumi at the age of fifteen in 1975. Shortly afterwards he learned the Mevlevi Turning, a sacred Sufi dance of movement, prayer and meditation, at Colet House in London.

Soon after this he met his first teacher, Dr. Francis Roles, who was himself a student of Shantananda Saraswati the Shankaracharya of the North of India,. Under Dr. Roles’ guidance he learned mantra meditation and was introduced to the classical system of Advaita or Non-Duality. This formed the foundation of his interest and practice for the next 25 years.

During this time he read everything available by the Russian philosopher, P.D. Ouspensky, and learnt Gurdjieff’s Movements. During the late 1970s he attended Krishnamurti’s last meetings at Brockwood Park close to his childhood home and was deeply impressed and influenced by his intellectual rigor and fierce humility. Throughout these years he also studied the teachings of Ramana Maharshi and Sri Nisargadatta Maharaj on a continuous basis. Towards the end of the 1980s he had a brief encounter with the teachings of Da Free John whose early writings made a deep impression on him.

During the late seventies and early eighties Rupert trained as a ceramic artist under Henry Hammond and Michael Cardew, two of the founding fathers of the British Studio Pottery movement. He started his first studio in 1983 making pieces that are to be found in private and public collections around the world.

A turning point in the mid 1990s led Rupert to an American teacher, Robert Adams, who died two days after he arrived. However, while visiting, Rupert was told about another teacher, Francis Lucille.

Several months later Rupert met Francis. The first words Rupert heard him say were, “Meditation is a universal ‘Yes’ to everything.” Although this is the sort of phrase anyone on the spiritual circuit might come across, nevertheless it was pivotal moment in Rupert’s life. “At this moment I realized that I had arrived home, that this encounter was the flowering and fulfillment of the previous thirty years of seeking.” When Rupert asked Francis at that first meeting what to do next, he replied, “Come as often as you can.”

Over the next twelve years Rupert spent all the spare time that work and family commitments would allow with Francis, exploring the sense of separation as it appears in the mind in the form of beliefs and, more importantly, how it appears in the body as feelings of being located and limited. Francis also introduced Rupert to the Direct Path teachings of Atmananda Krishnamenon, and the tantric approach of Kashmir Shaivism, which he had received from his teacher, Jean Klein.

Of the essence of these years, Rupert writes, “The greatest discovery in life is to discover that our essential nature does not share the limits nor the destiny of the body and mind.
I do not know what it is about the words, actions or presence of the teacher or teaching that seem to awaken this recognition of our essential nature as it truly is and its subsequent realization in our lives but I am eternally grateful to Francis for our friendship.”

Rupert lives in Oxford, UK, with his wife, Ellen, a therapist and yoga teacher in the non-dual tradition of Kashmir Shaivism, and his son, Matthew. He holds meetings and retreats worldwide.

Distinguishing the Finite Mind From the Separate Self

Meditation: The Light of God’s Presence

Are There Stages Of Realization? – Rupert Spira

Rupert Spira – The Nature Of Consciousness And Time

When Will I Finally Be Awakened?

The Essence Of Nonduality: Rupert Spira

Rupert Spira: The Transparency Of Things