Scientists Prove That Telepathic Communication Is Within Reach

by Corinne Iozzio: An international research team develops a way to say “hello” with your mind… 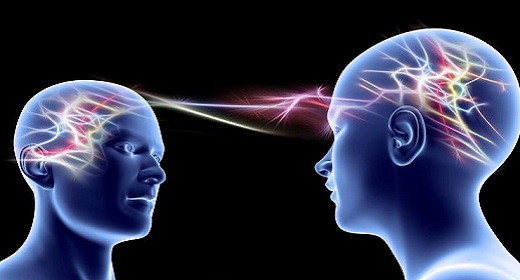 In a recent experiment, a person in India said “hola” and “ciao” to three other people in France. Today, the Web, smartphones and international calling might make that not seem like an impressive feat, but it was. The greetings were not spoken, typed or texted. The communication in question happened between the brains of a set of study subjects, marking one of the first instances of brain-to-brain communication on record.

The team, whose members come from Barcelona-based research institute Starlab, French firm Axilum Robotics and Harvard Medical School, published its findings earlier this month in the journal PLOS One. Study co-author Alvaro Pascual-Leone, director of the Berenson-Allen Center for Noninvasive Brain Stimulation at Beth Israel Deaconess Medical Center and a neurology professor at Harvard Medical School, hopes this and forthcoming research in the field will one day provide a new communication pathway for patients who might not be able to speak.

“We want to improve the ways people can communicate in the face of limitations—those who might not be able to speak or have sensory impairments,” he says. “Can we work around those limitations and communicate with another person or a computer?”

Pascual-Leone’s experiment was successful—the correspondents neither spoke, nor typed, nor even looked at one another. But he freely concedes that the test was more a proof of concept than anything else, and the technique still has a long way to go. “It’s still very, very early,” he says, “[but] we can show that this is even possible with technology that’s available. It’s the difference between talking on the phone and sending Morse code. To get where we’re going, you need certain steps to be taken first.”

Indeed, the process was drawn out, if not downright inelegant. First, the team had to establish binary-code equivalents of letters; for example “h” is “0-0-1-1-1.” Then, with EEG (electroencephalography) sensors attached to the scalp, the sender moved either his hands or feet to indicate a 1 or a 0. The code then passed to the recipient over email. On the other end, the receiver was blindfolded with a transcranial magnetic stimulation (TMS) system on his head. (TMS is a non-invasive method of stimulating neurons in the brain; it’s most commonly used to treat depression.) The TMS headset stimulated the recipient’s brain, causing him to see quick flashes of light. A flash was equivalent to a “1” and a blank was a “0.” From there, the code was translated back into text. It took about 70 minutes to relay the message.

There is a bit of contention about the degree to which this approach was actually novel. IEEE Spectrum reports that this recent study is quite similar to one conducted at the University of Washington last year. In that study, researchers used the same EEG-to-TMS setup, but rather than pulsed light, stimulated the brain’s motor cortex to subconsciously cause the recipient to strike a key on a keyboard. Pascual-Leone contends, however, that his work is notable because the recipient was conscious of the communication.

Both studies represent only a small step toward engineering telepathy, which might take years—or decades—to perfect. Ultimately, the goal is to remove the computer middleman from the transmission equation and allow direct brain-to-brain communication between people. “We’re still a long way from that,” Pascual-Leone admits, “but in the end, I think it’s a pursuit worthy of the effort.”

Outside of medicine, brain-to-brain communication could find applications across many disciplines. Soldiers, for instance, could use the technology on the battlefield, sending commands and warnings to one another. Civilians might benefit, as well; businesspeople could use it to send cues to partners during negotiations, or pitchers and catchers could avoid sign-stealing during baseball games.

Still, telepathic communication that works like a sort of futuristic walkie-talkie will involve major advances in sensing, emitting and receiving technologies—and perhaps even a slight retraining of the human brain. At the same time, Pascual-Leone cautions that scientists must also keep in mind the ethics of telepathy.

“Could there be potential for sending someone a thought that’s not desirable to them?” he says. “Those kinds of things are theoretically in the realm of possibility.”