The Rise And Fall Of Katharine Hepburn’s Fake Accent

by Trey Taylor: “Play it, Sam. Play ‘As Time Goes By,'” purrs a moon-faced Ingrid Bergman in the now-famous scene from 1942’s Casablanca… 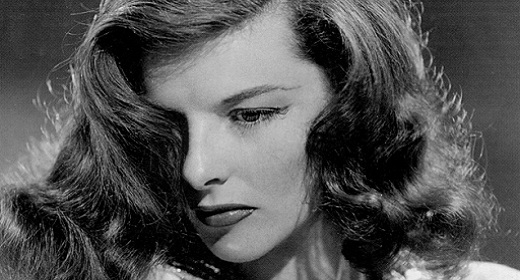 The grandeur and glamor in her voice, though, is a sham.

No, really. That’s not a real accent. It’s a now-abandoned affectation from the period that saw the rise of matinee idols and Hitchcock’s blonde bombshells. Talk like that today and be the butt of jokes (see Frasier). But in the ’30s and ’40s, there are almost no films in which the characters don’t speak with this faux-British elocution—a hybrid of Britain’s Received Pronunciation and standard American English as it exists today. It’s called Mid-Atlantic English (not to be confused with local accents of the Eastern seaboard), a name that describes a birthplace halfway between Britain and America. Learned in aristocratic finishing schools or taught for use in theater to the Bergmans and Hepburns who were carefully groomed in the studio system, it was class for the masses, doled out through motion pictures.

There are many theories as to how it became any sort of standard. The most probable being that when the silent film era was bulldozed for the early talkies, so too were those films’ famous faces, on account of their indecent sets of pipes. Silent movie star Gloria Swanson once notoriously quipped: “We didn’t need dialogue. We had faces.” Expression was paramount, and actress Clara Bow was master. Bow was born in a run-down tenement in old Brooklyn and withstood a dizzy ascent to stardom in films like It (1927) and Wings (1927). Her morose pout and slanted eyes took Paramount straight to the bank. People paid to ogle her. When she heard her voice recorded for the first time, she was appalled. “I hate talkies,” she said in Elizabeth Goldbeck’s The Real Clara Bow, “they’re stiff and limiting. You lose a lot of your cuteness, because there’s no chance for action, and action is the most important thing to me.” In The Wild Party (1929), for take after take Bow’s eyes would shift nervously to the microphone overhead, calling for another take.

This newfound pressure would ultimately lead to a downfall only Hollywood could trigger. Bow, crushed under the pressures of fame and work, was admitted to a sanatorium in 1930. At 25, her career was finished. But talkies didn’t need Clara Bow.

Whether or not this transition from speechless to speech was a catalyst for an industry standard, Edith Skinner’s Speak With Distinction—first published in 1942—crowned the high-society accent theater’s common tongue. Skinner, born in New Brunswick, Canada, was a voice coach and consultant to Broadway actors. After studying phonetics at Columbia University, she began to assist Margaret Prendergast McLean, a leading stage-speech consultant. She soon gained a national reputation, becoming the go-to instructor for all things speech and diction.

“Your voice expresses you,” Skinner once told The Milwaukee Journal. “You don’t want to lose that individual voice God gave you. What I try to do is get rid of the most obvious regionalisms, the accent that says, ‘you’re from here and I’m from there,’ the kind of speech that tells you what street you grew up on.”

Katharine Hepburn’s society burr was a perfect example of the Mid-Atlantic accent. “Come round about noon, tomorrow,” Hepburn trills in The Philadelphia Story (1940), a full-bodied pronunciation that turned her “o’s” into “ooh’s” that tumbled from her mouth, a modulation honed by her acclaimed New York dramatic coach Frances Robinson-Duff. Hepburn sought her out after being fired from her first production in 1928, when she insisted on hurriedly bleating out her lines. In a 1935 New Yorker article, a profile on Duff’s diaphragmatic methods reveals a bit more about Hepburn’s deficiency: “Miss Hepburn neglected the Duff fundamentals. Moreover, having been in Hollywood and away from regular instruction, Miss Hepburn had allowed her diaphragm to drift. When she returned East to do ‘The Lake,’ it was maladjusted and her jaws and tongue were unfree … But Miss Hepburn has character. She immediately returned to Miss Duff and the fundamentals.”

The drift away from these “fundamentals” resulted in a potpourri of speech on the silver screen. Katharine Hepburn’s put-on timbre is a higher percentage American than British. It’s quite similar to that of Claudette Colbert’s slightly harsher “r” in It Happened One Night (1934). Where the accent vastly differs is among men. Cary Grant, often said to be the blueprint of Mid-Atlantic English, was actually born in Britain. He came to America at the age of 16 as a stilt walker for the Bob Pender Stage Troupe, but abandoned his troupe after their two-year tour to stay on in America and pursue an acting career. This transatlantic trajectory resulted in an accent that couldn’t be pinned to a map. It was of nowhere in particular, but rather handsome all the same. Strange, then, that other famed male actors at the time—Jimmy Stewart and Humphrey Bogart—had wildly unencumbered manners of speaking. Their accents were very much their own: the former’s a rural dialect of Pennsylvania; the latter’s a spin on a regional New York accent.

So how did the accent die? Thanks in part to these sharp-tongued headliners like Bogart, Americans began to see themselves better reflected in film. The Mid-Atlantic accent was very much in vogue until its abrupt decline post-World War II. Taught in finishing schools and society parlors, the accent had become common to off-screen America. But more people spoke as they do today, with regionally developed accents like Boston Brahmin or Locust Valley Lockjaw. The rejection of Mid-Atlantic was also a rejection of classicism. Highfalutin figures in American society who luxuriated in the vernacular were edged out by the everyman. “This idealization of the linguistic behavior of upper class Americans continued, in some Hollywood films, up to the late ’40s and ’50s,” says Dr. Marko Modiano, senior lecturer in English studies at Gävle University. “It lost its position with the rise of a new generation of film stars who, like everyone else, were moving more and more toward the kind of neutral American English which we hear today in the US.”

Rita Moreno, who started off on stage in Singin’ In the Rain and later on screen in West Side Story (1961), told NPR, “I became the house ethnic. That meant that I had to play anything that was not American. So I became this gypsy girl, or I was a Polynesian girl, or an Egyptian girl. Finally, I decided by playing all these roles, I should have some kind of accent. But of course, I had no idea what these people sounded like, so I made up my own.” What Moreno didn’t realize is that her “ethnic” accent already existed, or at least, what she used as a foundation did. It was Mid-Atlantic English with ethnic injections and clipped delivery.

Nowadays, ethnic injections are only the result of behind-the-scenes training. Social media’s ability to mass-ridicule a crummy rendition of a foreign accent means that speech coaches are written into contracts. Barbara Berkery helped concoct Johnny Depp’s inebriated mumble for the Pirates of the Caribbean franchise, which has ruefully seeped into Depp’s subsequent roles (The Rum Diary, The Lone Ranger). And just to confuse things, Brits have spurned typecasting for the role of butler and are increasingly putting on American accents to win over US markets. Henry Cavill, the Channel Islands chap who plays Superman in this summer’s Man of Steel, did some heavy lifting to affect a Midwest manner of speech. “Doing an accent is like going into the gym for a workout,” he tells Collider. “If you pick up the heaviest weight possible and try and clean and press it, you’re going to pull something.” For Emma Watson’s Calabasas caw in The Bling Ring, she marathoned through several seasons of Keeping Up With the Kardashians to match the sisters’ vocal fry.

Marathon as they might, though, few of today’s actors will ever need to perfect a widely heard but invented dialect. Mid-Atlantic English defined an era on screen by lending films an escapist, more-refined-than-reality allure. As Hollywood’s golden age was ushered out, the accent went with it. Katharine Hepburn and Jimmy Stewart’s romantic spat in The Philadelphia Story offered a metaphorical damnation of the high-society cinema accent. “Shut up. Shut up. Oh, Mike, keep talking. Keep talking. Talk, will you?” Hepburn pleads. To which Jimmy Stewart’s character soberly states, “No, no, I’ve… I’ve stopped.” And so, too, did Mid-Atlantic English.