by Jennifer Pfaff: Even through a phone conversation, without the hungry, vast audience and his visible 6’7” frame, Tony Robbins’ larger-than-life presence is felt… 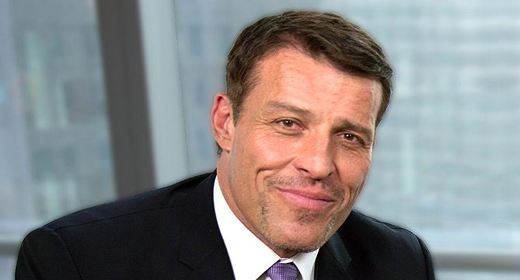 The motivational speaker talks quickly, passionately with a booming voice and hearty laugh that, without a doubt, is emitting from the mega-watt smile familiar to people worldwide—like the four million from 100 countries who have attended his seminars, held across the globe, and the 50 million who have read his best-selling self-help books.

For the past 36 years, the award-winning life coach has helped others face their fears and overcome personal challenges of all kinds: health, relationships, finances and more. A leader in the industry, Robbins incorporates tactics such as speeches, immersion programs and firewalks, in which participants walk barefoot across hot coals. He has assisted people from all walks of life, from average citizens to CEOs and celebrities—becoming a go-to guide and a celebrity of sorts in the process.

“When you find what your drives are, drives don’t go away,” he says. “My drive is to light people up, to help people change their lives. I don’t have to work at that. I love it.”

The California native and his wife, Sage, recently traded their main residence on the West Coast for an ocean-to-lake property in Manalapan. Palm Beach Illustrated caught up with Robbins about his move, career and favorite hotspots around town.

Tony, welcome to the neighborhood.

Why did you want to move to Manalapan?

Well, I have four homes around different parts of the country, and I’ve never lived in Florida before. My main home was in California, and I was there less than 90 days [out of the year in 2012]. We decided in January we wanted to look for a new place. About six weeks later, I saw 87 properties in three states, and I found this home. I’m obsessed with finding the best.

My favorite place in the world is Fiji. I have a home there and a resort there with 525 acres and 3,000 [feet of] oceanfront, and I live there two months out of the year. [In Palm Beach], it feels like you’re in the Caribbean. I’ve got about 200 feet of oceanfront and 200 feet of the Intracoastal in the back. My wife has all the resources she wants: She could be shopping in 10 minutes, or she could go to Boca in 15 minutes. It’s nice to go have Sprinkles ice cream or hop over to Nordstrom’s. It’s a beautiful area, and you’ve got everything you could imagine here. We really love it. We’re excited about it.

Will this be your primary residence?

We’re full-time residents, but we travel so much, we won’t be here a lot. It’s our main residence, for sure. We’ll spend more time here than anywhere else.

You certainly travel a lot for your work. What are some of the most common self-help issues you’re seeing among clients today?

A lot of people, like CEOs, are looking for that edge to go to the next level. They might be facing challenges that relate to their finances or career.

Other people are beginning a journey: They’re starting a business, getting in a new relationship, their kids have grown up, they’ve got a birthday with a zero in it or they’re reevaluating their life.

The most common challenges are health ones—energy, body—or something to do with a person’s level of fulfillment and happiness: They’ve made a ton of money, and now they’re bored out of their mind.

Relationship challenges are another big one. People might have love, but they’re missing passion in their relationship. Those are the four or five most important areas for most people.

What is your personal challenge, and how do you work to overcome it?

Mine is time. I’ve got 12 companies, I do weekend seminars that are 50 hours long, I have four adult kids and two grandkids. I was in 16 countries last year doing programs. Time is a beast I’m constantly battling.

I try to make sure time serves me—I don’t serve time. Instead of looking at all I’ve got to do on my to-do list and saying, “Holy [expletive],” I say, “What are my outcomes? What matters most that will make me feel fulfilled in my life?”

You talk a lot about how emotions shape decisions. What advice do you have for maintaining a positive attitude so people view problems as opportunities, rather than challenges?

It sounds trite, but I think the most important thing is to find your passion and spend the majority of your time in it. …

How do you find your passion? You expose yourself to people who have it better—people who seem to enjoy what they do. You’ve got to put yourself in different environments.

[But] even if you have your passion, you can find yourself losing your drive, becoming frustrated or angry or just feeling down or bored. Most people don’t practice the simple discipline of standing guard at the door of their mind. You’ve got to be careful of what goes in.

When I was 17, one of my teachers said to me, “Tony, what if your worst enemy dropped sugar in your coffee?” I said, “Well, you’ve got sweet coffee.” He said, “What if your best friend, by accident, drops one drop of strychnine in your coffee?” I said, “Well, you’re dead.” He goes, “That’s right. Life is full of sugar and strychnine every day. You’ve got to stand guard at the door of your mind.” Who you spend time with translates to who you become.

I say: Find your passion, and surround yourself with people who are filled with passions or full of life. If you play tennis with someone who’s at the same skill level as you, your skill level’s going to go down. It’s the same thing with life. You’re going to be better off if you play with someone at the next level.

Don’t take your mind for granted. Every day, I feed my mind. At least 30 minutes a day, I read something that’s going to inspire me, that’s going to teach me, that’ll give me some insight, wisdom.

Is that the Tony Robbins secret to success? If not, what is?

It’s loving your life. If you don’t love your life, it doesn’t matter how much you achieve. I always tell people: Success without fulfillment is the ultimate failure. Your life has to have meaning, and meaning comes from contributing to something.

What makes people happy is just one word: progress. Even if your body or relationship isn’t where you want it to be, but you do something about it—you go for a jog or start facing the challenge—progress picks up.

My view is: The secret to living is giving. If you feel like you’re contributing, your life is going to be meaningful. Then it’s just simply loving what you do and who you’re with. That’s 99 percent of happiness and fulfillment in life.

Live with passion. That’s everything I’m about. It’s to learn, to love and to leave a legacy.

What’s been the most rewarding experience you had in your work recently?

Two weekends ago, 6,000 people attended an event I hosted in L.A. One person there was this young man named Nicholas, who was paralyzed from the school shooting [at Chardon High School] in Ohio last February. Another was a young woman named Ashley, who was in Aurora, Colorado during the shooting [at a movie theater in July 2012]. She witnessed her 6-year-old daughter being shot and killed right in front of her. Her boyfriend fled and left her there. She was pregnant and shot in the stomach and lost her unborn baby and also became paralyzed herself. To turn them around in a weekend was pretty fulfilling.

We had a firewalk there. It’s kind of a metaphor for breaking through. I held Nicholas’ legs, and he walked on his hands across the fire. Ashley and Nicholas now are being trained to be coaches so that when things like what happened in Boston or Newtown occur, they’ll fly in and help people. If they can turn themselves around after what they’ve been through, they can help others do the same.

You’ve also coached a lot of celebrities. Can you share a good story you have from working with one?

I’ve had a lot of crazy, funny moments. I got the call to coach Mike Tyson after he bit off his opponent’s ear [laughs]. That was wild. He was one of the most interesting people I’ve worked with because, believe it or not, he’s one of the most well-read people you can imagine. He can go from quoting [Russian novelist Leo] Tolstoy to talking about existentialism. …

[President] Clinton was somebody I wasn’t a fan of at the time [of working with him], but I became a fan because his love for people is so sincere and daring. I love the diversity of what I do—from that to the two young people I told you about at my event recently.

Recently, Hugh Jackman came to me. He’s made so many great films, and he’s such a great actor. When he’s stage acting on Broadway, he’s so in command. He can move anybody in the audience to laughter or to tears. But when he does close-ups in a movie, he really was uncomfortable, and he felt like he never did his best acting. He just recently, as you know, was offered this amazing role as Jean Valjean in Les Miserables. He said, “I want to break through. I don’t want to just do an action film. I really want to do this dramatic role and be my best.” He just had this fear when the camera would come up. So I coached him in how to take the emotions and feelings of being on stage and bring them to the camera.

I think he could play you in a movie.

Outside work, how do you enjoy spending your free time?

My wife is my life. We have a variety of things that we do. We spend time in Fiji, which is our escape place. We go to Sun Valley [in Idaho], we snowboard, we scuba dive, I fly helicopters sometimes. We play golf. I love spending time with my wife and family.

The hot fudge sundae at the Palm Beach Grill [laughs]. It’s deadly. It’s hard to go there and not have it.

Last question: If you were stranded on a desert island and you could only have three things with you, what would they be?

My wife, my laptop and I’d say the ocean, but I’d already have that [laughs]. I’d say plenty of food and water [laughs]. That’s it for me. Give me my wife, access to learning and the world, great food and a great environment, and I’m set.