What’s The Healthiest Fish To Eat? We’ve Got The Facts, Plus 7 To Avoid

by (Editor): It’s no secret that fish is good for us… 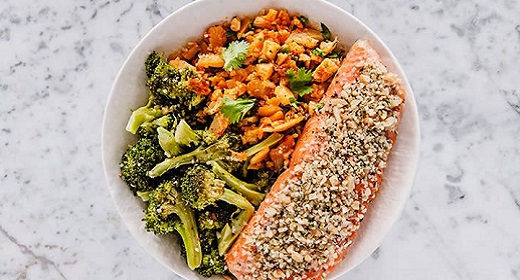 Not only is it loaded with protein and low in saturated fat, it’s also rich in omega-3 fatty acids, which can reduce your risk of heart disease and stroke, according to the American Heart Association. One analysis of 20 studies even found that one or two three-ounce servings of fatty fish per week can reduce your risk of fatal heart disease by 36 percent. But some fish are healthier than others, and some are downright hazardous if eaten in excess. We’ve got the truth about the healthiest fish to eat, plus what fish to avoid.

The Benefits of Eating Fish

There are *tons* of reasons to add fish to your diet. Let’s talk about those beloved omega-3 fats, which are rich in vitamin D and selenium, plus protect the heart from erratic or lethal cardiac issues. They also help lower blood pressure and triglycerides, improve blood vessel function, aid in prenatal and postnatal neurological development and reduce inflammation. While you can get omega-3 fatty acids through fish oil supplements, flaxseed, walnuts or other foods, fish is really the best source.

Fish has a long history of keeping people healthy. “Historically, fish has been a part of diets of the Blue Zones, centenarian regions of the world where people live to be 100,” says Dr. Felicia Stoler, DCN, a registered dietitian, nutritionist and exercise physiologist. “Nicoya, Okinawa, Sardinia, Ikaria…interestingly, in those regions people eat predominantly plant-based [diets] with smaller amounts [and] portions of animal protein, including fish.”

Fish also can also help reduce the risk of many chronic illnesses. Omega-3s can lower triglycerides and blood pressure, reduce blood clotting, lower stroke and heart failure risk and aid with irregular heartbeats, according to the Mayo Clinic. The brain benefits big-time, too. Researchers at the University of Pittsburgh found that eating baked or broiled fish once a week can lower your risk of Alzheimer’s, says the Fisher Center for Alzheimer’s Research Foundation. Fish oil supplements, rich in omega-3s found in cooked fish, even has the potential to alleviate mild to moderate depression.

Though fish is a solid choice in general, how you prepare it is key. “Fish is healthy; how you cook it matters,” says Stoler. “If you deep-fry and batter any fish, it loses its health value.” Bummer, we know. Here’s the good news: When it comes to getting the American Heart Association-recommended two servings (either 3 ½ ounces cooked or a ¾ cup of flaked) of fatty fish a week, there are tons of options. And you don’t have to get it fresh to reap the benefits. “Fish are not GMO,” Stoler tells us. “Frozen is just as good as fresh.”

When it comes to wild versus farmed, many experts say it depends on the fish. Stoler, on the other hand, says, “Sustainability, honestly…eating fish isn’t sustainable, unless it’s farm-raised. We’ve completely disrupted the aquaculture of our oceans, seas and rivers. Just as there are companies making plant-based protein, there are companies doing the same with fish. In fact, some are using real fish-cell cultures to make fish protein in a lab!”

Whether you get your fish at the supermarket or take your chances with a local fisherman’s co-op like Stoler, there are big perks and flavor to dig into. And we intend to do just that. Here are some of the healthiest fish to eat.

We can’t get enough of this pink powerhouse. If you’re not a fan, you may feel like the world is trying hard to convert you. But don’t worry. “Salmon has been touted as ‘the best’ of all fish…[but] it’s one of many sources of protein,” Stoler explains. “Whatever fits your budget and pleases your taste buds.”

Farmed salmon is often grown in pens susceptible to parasites and disease, then treated with antibiotics. Compared to farmed, wild salmon tends to be a little lower in fat, according to the Washington State Department of Health, while being slightly higher in protein, vitamins and minerals. So, choose wild when you can; the farming process contributes to pollution too. Hemp-walnut crusted salmon, anyone?

These tinned gems are more powerful than they look. There are more omega-3s in a serving of these teeny-tiny guys than both salmon and tuna, plus it’s loaded with vitamin D, vitamin B12 and calcium. And because they’re so small and only eat plankton, it has one of the lowest levels of mercury of all fish *and* one of the highest levels of omega-3s, according to the Cleveland Clinic.

Another itty-bitty fishy with lots of benefits. It’s an awesome source of omega-3s (about one-and-a-half grams for every three ounces) and low in mercury due to its size, says the Cleveland Clinic. Add the antioxidants, iron and vitamins into the equation and you’ll be including these on your grocery list next week. Tally another win for the little guys.

What you find at the supermarket is likely this species. All U.S. rainbow trout are farm-raised, usually in freshwater ponds or flow-through raceways. According to Monterey Bay Aquarium Seafood Watch, farmed rainbow trout is always a better choice than wild and has less of an environmental impact. Rainbow trout is high in protein and omega-3s, and while its wild counterpart is just as healthy, farmed is probably cheaper and easier to find.

If you’re not really a fish person, this is a nice place to start. Its mellow flavor and firm mouthfeel aren’t as, well, fishy as some other choices, so you may find it more palatable if you’re not a fan. It’s also packed with vitamin D and potassium. But avoid overfished Atlantic halibut because its population level is way below its target, according to the National Oceanic and Atmospheric Administration.

You wouldn’t know it from the looks of this list, but not many foods contain a lot of vitamin D au naturel. Then there’s mackerel, which is not only loaded with it, but also bursting with protein (we’re talking 21 grams per fillet, according to the USDA). This type of mackerel is low in mercury, but watch out for the King and Spanish species—their mercury levels are high, says the FDA.

The umami-filled secret to your famous Caesar dressing is ready to take center stage. Like herring and sardines, these pack a lot of omega-3s into a tiny package (1.4 grams in a single serving, says the Cleveland Clinic) and have low mercury levels.

You know how you can inhale fish taco after fish taco with no end in sight? You have tilapia to thank for that. The FDA lists it as having minimal mercury compared to other fish. It’s also super lean and mild, making it versatile for all kinds of dishes. Stoler recommends it as a great frozen option.

One gram of fat and less than 100 calories in a single three-ounce piece? Yes, please. Cod is also high in phosphorus, which promotes bone development. Pacific cod is a better option than Atlantic due to its higher population, if you have the choice.

Even picky eaters can get on board with this mild whitefish that’s low in mercury. And so will your trainer: It’s got 57 percent of your daily vitamin B12 and a 21 grams of protein in a single three-ounce serving.

Alaskan pollock is flaky, and we mean that in the best way possible. It’s low in carbs, fat and mercury. Opt for wild-caught when you can; it has some of the lowest mercury content of all wild fish. Flounder is lower in omega-3s than others, but still low in mercury and a lean, healthy choice overall. Sole is a comparable ocean-floor dweller if you can’t find flounder. Farmed arctic char is a prime choice for salmon lovers, thanks to its flakiness and fattiness. Shrimp, oysters, scallops and other shellfish are also all low in mercury and fat, plus high in protein. While they’re lower in omega-3s than fish (and technically aren’t fish at all), we’d be remiss to not give them any love.

All fish and shellfish have at least traces of mercury. While a small amount won’t affect your health much, it’s poisonous in larger amounts. Not only is it in the ocean, but it builds up in fish in its organic form, methylmercury, as they consume other fish over time. Methylmercury exposure has been connected to stunted neurological development, peripheral vision loss, pins and needles, lack of mobility or coordination, speech impairments and muscle weakness, according to the U.S. Environmental Protection Agency. Pregnant women who consume methylmercury can expose their infants to nervous system and neurological issues ranging from motor skills to cognitive thinking. In large amounts, it can cause lasting damage to the brain and nervous system, the Agency for Toxic Substances and Disease Registry warns. The Environmental Protection Agency even considers methylmercury a possible human carcinogen.

Here’s the good news: The nutritional perks of eating fish definitely outweigh the negatives. In an advisory published in the American Heart Association’s journal Circulation, Eric Rimm, professor of epidemiology and nutrition at the Harvard T.H. Chan School of Public Health, said, “For adults eating a serving or two of fish a week, the benefits of fish are likely at least fiftyfold more than any concerns over other compounds that may be in fish.”

As long as you’re limiting how much fish you eat—especially high-mercury fish—you should be safe. While it isn’t threatening to most people, mercury could harm an unborn baby or young child, so pregnant women, women who are breastfeeding and young kids should avoid eating fish with potentially high mercury levels and limit their intake of fish altogether.

Larger, older predatory fish tend to have higher levels of mercury, not to mention PCBs (polychlorinated biphenyls, aka industrial chemicals found in fish due to environmental pollution) and other contaminants. Here are a few types of fish to stay away from or consume sparingly.