With Sea Level Rise, We’ve Already Hurtled Past A Point Of No Return

by Tom Yulsman: Climate negotiators in Madrid are trying to avoid 2 meters of sea level rise, but research suggests 10 times that — 65 feet — is already inevitable…

As 25,000 people from 200 countries were converging on Madrid this week for the start of climate change talks, U.N. Secretary-General António Guterres voiced this stern warning:

When it comes to climate change, “the point of no return is no longer over the horizon. It is in sight and hurtling toward us.”

As sobering as it was, Guterres’s statement had a hopeful flip side: We can still avoid crossing that Rubicon into the realm of dangerous climate change — if only we get more serious at cutting emissions of climate-altering carbon dioxide.

That’s ultimately the whole point of these annual Conference of the Parties meetings, or COPs — finding ways to galvanize global action on climate change.

But there’s just one problem: Research on past climates suggests we’ve already hurtled past one significant point of no return, one that should prompt us to pay more attention to adapting to climate change.

The research has focused on sea level during past times when carbon dioxide in the atmosphere was as high as today. The work suggests that we’ve already committed ourselves to sea level rise far higher than the 2 or so meters that climate negotiators are trying to avoid with CO2 cuts.

“We’ve already baked in 20 meters of sea level rise,” says James White, a University of Colorado scientist who has studied ancient climates to gain insights about the future. “The coast is toast.”

So far, sea level rise has been relatively modest. As Greenland and Antarctica have shed ice, and sea water has expanded as it has warmed, global mean sea level has come up by about 7 to 8 inches since 1900.

But the rise is accelerating, with about 3 of those inches occurring since 1993. Moreover, just those 8 inches have made high-tide coastal flooding more extensive and severe — as was demonstrated recently with the catastrophic floods in Venice.

In the U.S., coastal flooding exacerbated by sea level rise is a worsening trend that “threatens America’s trillion-dollar coastal property market and public infrastructure, with cascading impacts to the larger economy,” according to the most recent U.S. National Climate Assessment.

Sixty-five feet of sea level rise is nearly 100 times higher than what we’ve experienced so far. Here’s what that would do to just one part of the U.S. coast: 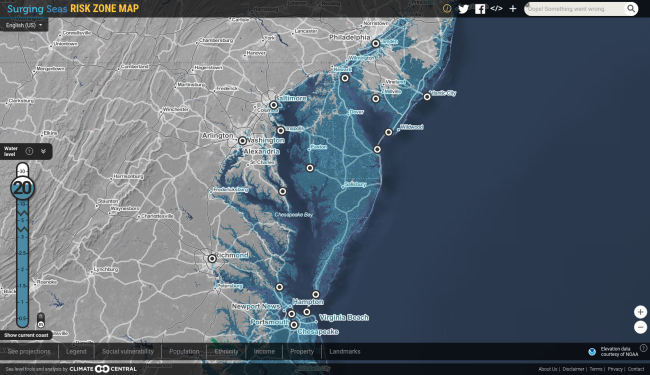 In the map above, have a look at Delaware — the first state to ratify the U.S. Constitution. It’s completely swallowed by the sea.

Or, as White describes it, “First in, and first out.” (For a full-size, interactive map, see Climate Central’s feature here.)

We haven’t seen such a dramatic impact yet because parts of the climate system respond slowly to a rise in CO2. In fact, a full rise of something on the order of 65 feet would play out on a timescale of centuries, not decades. And that’s obviously a good thing, because it means we have time to prepare.

But there’s also a sobering flip side to that somewhat reassuring picture: The science suggests that such a rise is probably inevitable. Yet even as we’re already suffering through hotter and longer-lasting heat waves, more intense storms, and more frequent megafires (not to mention increased coastal flooding), we humans still haven’t managed to turn the tide on rising levels of CO2.

There is some good news: Major research findings published this week show that global emissions of carbon dioxide from fossil fuels and industry grew slowly in 2019 due to a decline in coal burning. The projected growth rate of just 0.6 percent this year is down from 2.1 percent in 2018.

Even so, the concentration of CO2 in the atmosphere hit a high of about 411 parts per million this year, up from about 280 in preindustrial times.

And, crucially, the rate of CO2’s increase has been accelerating over the past decade, not slowing — as the following graphic shows: 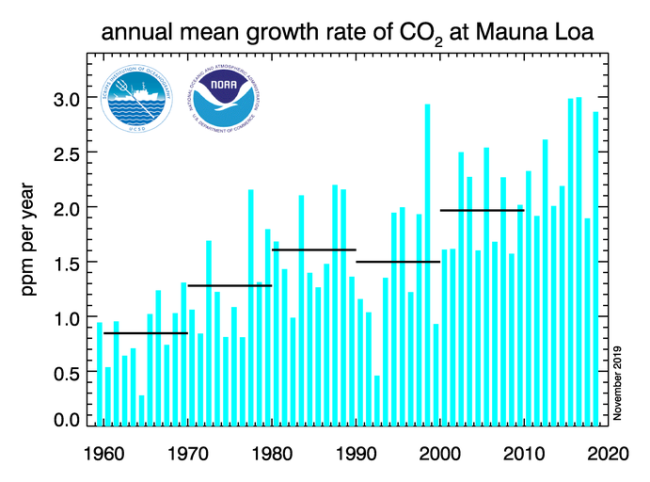 On a decade-by-decade basis, the growth rate of carbon dioxide in the atmosphere has been rising, not slowing — as shown by the horizontal bars. (Source: NOAA Earth System Research Laboratory)

You have to go all the way back to the middle of the Pliocene Epoch, 3.3 million years ago, to find atmospheric carbon dioxide concentrations about as high as they are today. For this and other key reasons, scientists regard this time period as a good analogue for where our climate is headed.

Thanks in large measure to that relatively high level of CO2 in the atmosphere, temperatures in the mid-Pliocene were about 2 degrees Celsius warmer than they are today. And the Arctic was particularly warm. As science writer Alexandra Witze has written in Science News, “The warmth allowed trees to spread far to the north, creating Arctic forests where three-toed horses, giant camels and other animals roamed.”

Today, the Arctic also has been affected more than other regions, warming twice as fast as the rest of the globe.

By gleaning chemical clues from the remains of tiny organisms that lived in the oceans during the mid-Pliocene, scientists have also sussed out how high the seas stood. 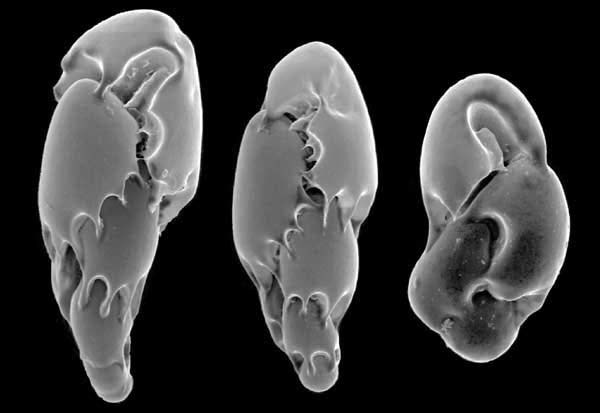 A scanning electron micrograph of the shells of tiny ocean organisms known as foraminifera. The remains of foraminifera from 3 million years ago have yielded chemical clues to the height of the seas at that time. (Source: NOAA/OER)

Among these organisms were foraminifera, single-celled planktonic animals with chalky shells. When these creatures died, they settled to the seafloor where their shells eventually became preserved in rock as they became buried by successive layers of sediment. Today, scientists recover the shells in cores they drill from the seafloor.

The chemistry of the shells was strongly influenced by the conditions of the water in which these organisms lived. Scientists have used that fact to work out the temperature of the ocean when the organisms were alive, and, crucially, how much ice was present on land.

A number of studies using this and other approaches have yielded a picture of Greenland during the mid-Pliocene as completely ice free, and Antarctica with a significant portion of its ice sheet gone. With that much ice missing, these studies suggest that sea level was 10 to 35 meters, or 30 to 115 feet, higher than today. 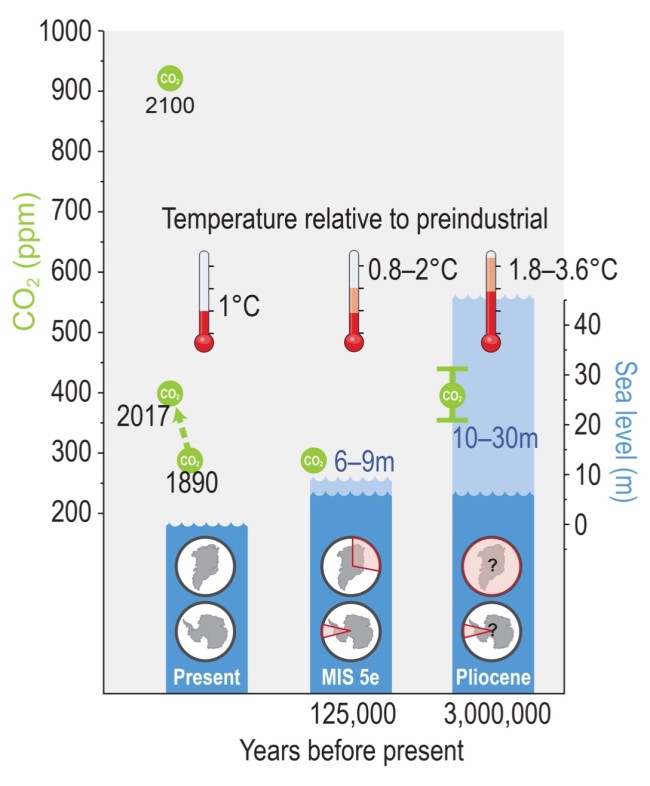 The relationship between peak global mean temperature, maximum global mean sea level, and sources of meltwater, are shown here for two periods in the past when global temperatures were comparable to or even warmer than at present. The mid-Pliocene is on the right. Red pie charts over Greenland and Antarctica show how much ice is thought to have been missing compared with today. (Source: Fourth U.S. Climate Assessment)

Twenty meters is about in the middle of this range. If, as the science suggests, we’ve already locked in that much sea level rise, then one could be forgiven for feeling a sense of resignation, or even despair.

But remember that the rise would occur over a very long time. So, if we start thinking now about how to adapt to it, we’d have plenty of time to meet the challenge. This could also be part of a broader effort to deal with serious climate change impacts happening right now.

Some argue that we have neither the time nor the resources to deal with adaptation given the pressing need to mitigate future impacts. For example, David Roberts writes in Vox that a “just solution to climate change crucially hinges on maxing out near-term mitigation spending.”

But climate impacts are already hurting millions of people worldwide. “In 2016 alone, extreme weather-related disasters displaced around 23.5 million people,” according to the Environmental Justice Foundation. “This does not include the people forced to flee their homes as a consequence of slow-onset environmental degradation, such as droughts, sea level rise and melting permafrost.”

Failing to help people adapt to these kinds of changes would be terribly unjust.

But working to protect people from what’s already happening, as well as what’s coming, could be an antidote for despair — a way for people to feel that they can make a difference. And that could help galvanize action on arresting the rise of CO2 in the atmosphere.

Make no mistake: That’s absolute necessary. Failing to bring emissions down will make things much worse — so much so that it would be difficult to imagine how we’d ever cope.

If emissions of carbon dioxide continue to rise as a result of fossil fuel use, atmospheric concentrations could go from 411 parts per million today to 800 ppm by about the year 2080. Research on past climates shows that when CO2 in the atmosphere gets that high, “Antarctica melts,” White says.

That would give us 80 meters — or about 260 feet — of sea level rise. We clearly shouldn’t go anywhere near that.

To get out of denial, it would be helpful if we faced up to just how much of an impact we’re having on our planet’s life-support systems. Here’s how White thinks of this:

“During the 1970s, we were passengers on spaceship earth. We’ve since moved up to the driver’s seat, and we’re buckled in and driving. This is a planet that no longer functions just on natural laws, but on natural laws plus humans.”