by Justin Rowlatt: Elon Musk has perhaps the most exciting portfolio of businesses on the planet… 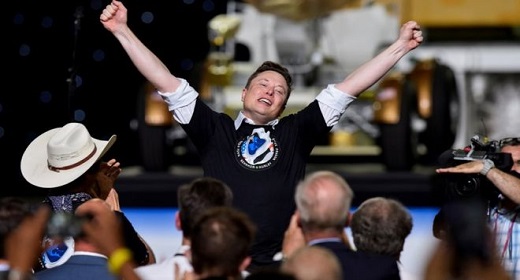 There’s SpaceX with its mission to Mars, and Tesla with its super-fast hi-tech electric cars.

He claims his Hyperloop concept could revolutionise public transport. And even his Boring Company is kind of interesting – it aims to find new ways to dig tunnels.

So which one will end up changing the world most? It is my contention that it will be his battery business.

Doesn’t sound that scintillating does it?

But the compact, lightweight lithium batteries that mean you can now stream movies on wafer-thin phones will soon be powering much more of your life.

You’re probably already interested in the potential of electric cars.

But maybe you also have the usual concerns about actually buying one: the price, the range, and worries about where you are going to charge the thing and how long you’ll be stuck there.

Yet the market certainly seems to reckon they are the future. Just look at the Tesla share price.

Last week it briefly nudged ahead of Toyota to become the world’s most valuable car firm, even though the Japanese giant sold 30 times as many vehicles last year. 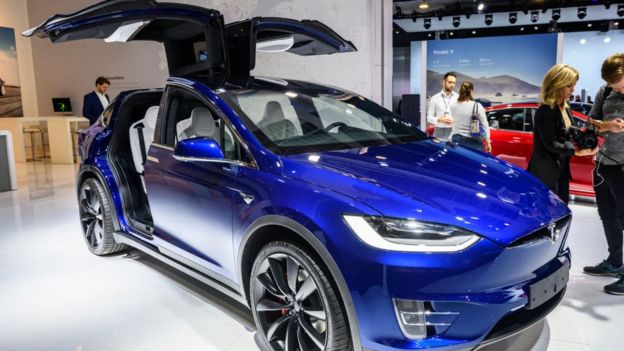 One reason is that Elon Musk has been teasing investors and rivals with the promise of “battery day” some time soon, at which he will announce a series of advancements in battery tech.

And cars are not the only vast new battery market.

You might have seen a story I wrote about how the world is slowly weaning itself off coal.

Well, gigantic batteries connected to our electricity grids are going to be central to the great renewable energy revolution too.

He expects electric vehicles alone to drive European battery demand up by a factor of 10 this decade.

But this explosion in demand will only be possible if we can make batteries cheaper, more durable and more efficient.

That is a big ask for any technology but fear not, Mr Musk’s proposed “battery day” comes thanks to a whole cascade of breakthroughs.

The first of these was announced just last week when the Chinese battery-maker that supplies most of the major car makers, including Tesla, revealed it had produced the first “million mile battery“.

Contemporary Amperex Technology (CATL) says its new battery is capable of powering a vehicle for more than a million miles (1.2 million, to be precise – or 1.9 million km) over a 16-year lifespan.

This is a huge improvement in battery life, but will cost just 10% more than existing products, says CATL chair, Zeng Yuqun.

Having a battery you never need to change is obviously good news for the electric car industry. But longer-lasting batteries are also essential for what’s known as “stationary” storage too.

These are the batteries we can attach to wind turbines or solar panels so renewable energy is available when the sun isn’t shining or the wind isn’t blowing.

Fairly soon you might even want a stationary battery in your home to store cheap off-peak electricity, or to collect the power your own solar panels generate.

The next barrier that is likely to be broken is price.

The landmark challenge in the electric vehicle industry is to get a battery costing under $100 (£78) per kilowatt hour.

“At that point you start to get electric vehicles that are cheaper than the equivalent internal combustion vehicles,” says Seth Weintraub, a US battery technology journalist.

Once that happens the internal combustion engine will be effectively dead., he says, comparing it to how digital killed off film cameras a decade ago.

So when will this crucial price-point be passed?

He believes it already has.

Mr Weintraub says his sources tell him these batteries are going into Teslas right now, and thinks this will be one of Mr Musk’s “battery day” revelations.

Cheaper batteries will address some of the other key concerns potential customers have.

That is because it will make it economical to put bigger batteries into cars.

That has two major advantages.

Second, big batteries charge faster for the bulk of their capacity, so you might be able to get up to 300 miles of range with just 10 minutes of charging.

That’s comparable to the time it takes to fill a car with petrol or diesel.

So expect Elon Musk to announce upgrades for the Model S and X which will combine 400-500 mile range with supercar performance, says Mr Weintraub.

So, where are we going to make all these wonderful new batteries?

Again, we are expecting some major announcements from Mr Musk. Earlier this month his private jet reportedly landed at Luton airport.

The man, who actor Robert Downey Jr used as inspiration for Marvel’s Tony Stark in the 2008 film Iron Man, is believed to have been flown by helicopter to a 650-acre site just outside Bristol.

The location is reckoned to be the prime UK candidate for one of Tesla’s “Gigafactories”, the huge battery plants it’s pioneering.

And he is planning an even bigger factory in the US, probably in Austin, Texas.

According to Seth Weintraub this one will be a “Terafactory”.

That’s quite an upgrade.

Gigafactories were so called because they would produce batteries that could store billions of watt-hours of power.

By that reasoning a terafactory should be able to make batteries with a total capacity in the trillions of watt-hours.

And the logic of Mr Musk’s ever-expanding factories remains the same. The bigger the scale, the easier it will be to deliver cost-slashing innovations, he believes.

So where are all the battery chemicals going to come from?

Tesla’s Chinese partner CATL has found a way to make batteries free of cobalt, at least for shorter-range vehicles.

Cobalt is expensive and a lot is sourced from DR Congo, where it has been associated with child labour.

There are no plans to get rid of the key ingredient in lightweight batteries, lithium.

There are large supplies in salt deposits around the world, including the biggest single reserve – as yet unexploited – in the hauntingly beautiful Salar de Uyuni salt plain in the remote Bolivian Andes.

The problem is the current method of separating out the lithium in these deposits is slow and inefficient.

The biggest salt lake currently being mined is the Salar de Atacama in Chile. And at their significantly lower altitude, the Chileans can use natural evaporation to crystallise the salts, driven by the intense sunshine of the Atacama Desert.

Despite these advantages, the process still takes months, and only recovers about 30% of the available lithium.

Which is where a wannabe Elon Musk-style tycoon with a similarly exotic name comes in.

Teague Egan is working with scientists on what he says is a “nanoparticle” filter that can separate lithium from other salts in solution, and will recover more like 90% of the lithium.

Instead of months, he reckons it could eventually take just a few days.

Mr Egan says his firm EnergyX is already talking to key players about applying the technology on a commercial scale.

If effective it could dramatically cut the cost of lithium – removing one of the biggest bottlenecks to the ramping up of battery production..

What this is really about

Which brings us back to my original premise – that batteries will be the most transformative part of Elon Musk’s empire.

Mr Musk’s ambition is to create the iPhone of cars – a must-buy product that revolutionises our driving experience, while also delivering him a big fat profit.

That’s what will make us ditch our old diesel and petrol cars.

But there is also something much bigger at stake: climate change.

If cheaper, better batteries enable a rapid switch to electric vehicles, and give us renewable energy whatever the weather, then clearly they are going to be central to efforts to decarbonise our economy.

Astronauts blasting off into space are a lot more exciting than a grey box with a couple of wires attached.

But if that grey box helps us jettison fossil fuels, then the grey box wins in terms of its power to change our world.

Of course, you may disagree. And if you do, then please tell me why.