by Dan Gearino: One of the big debates in the regulation of renewable energy is about how best to compensate owners of rooftop solar for electricity they sell back to the grid… 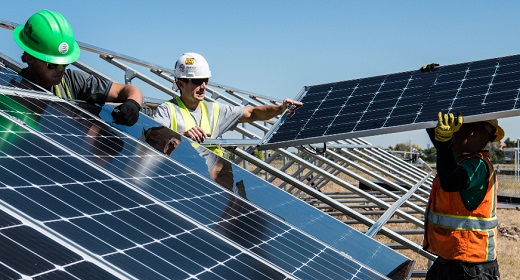 This fight over “net metering” is playing out across the country, with utilities often trying to make rooftop solar less of a financial winner for customers.

In Arkansas, solar advocates are feeling a sense of relief after state regulators ruled on Monday that utilities must keep the current net metering system in place until at least the beginning of 2023 for systems that are less than 1 megawatt. That means no additional fees and no changes to rates that now pay rooftop solar owners the full retail price of electricity for any excess electricity they sell to the grid.

Arkansas is one of a band of states in the South that have an abundance of sun but have been slow to develop solar power. The state ranks 31st in the country in installed solar, with 220 megawatts. If the United States is going to move swiftly on the transition to clean energy, these sunny Southern states must play a part.

Gary Moody, the National Audubon Society’s national director of state and local climate strategy, told me that if the Arkansas decision had gone a different way, “it could have been the end” of rooftop solar in the state.

“I’m feeling really good,” said Moody, who is based in Arkansas. “The mood is really positive.”

The ruling says that utilities can propose changes to the net metering rates for solar systems larger than 1 megawatt, which are large commercial and industrial systems. But smaller systems would retain the current rates until 2023 at the earliest.

Utilities such as Entergy have said they need to impose new charges on owners of solar systems to cover a portion of the utilities’ costs to maintain the grid. This is a familiar argument by the utilities, which solar advocates say is part of an attempt to restrain solar’s growth.

The ruling in Arkansas follows the passage last year of a state law that allows new options for customers to finance solar projects, and says that regulators can consider whether the current methods of compensating rooftop solar owners are appropriate. The law was a compromise between utilities and businesses that want to expand solar.

Lawmakers gave regulators—in this case the Arkansas Public Service Commission—the leeway to settle some of the toughest disputes, and the commission responded by mostly maintaining the status quo.

Moody and other environmental advocates say the state may be primed for a solar boom, and they are pleased that regulators are not standing in the way.