by Dan Gearino: Battery storage is a vital part of a cleaner grid because it helps to fill in the gaps left by the fact that wind and solar are intermittent resources… 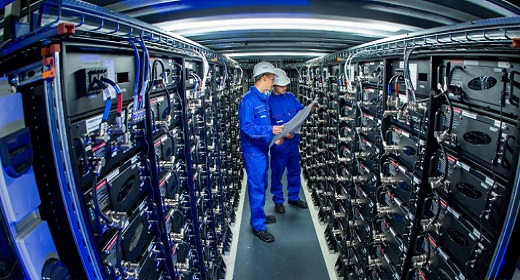 And, like wind and solar, the growth of battery storage is closely tied to a decrease in its costs.

The combination of high need and falling costs means we are seeing new projects on a scale we’ve never seen before, including a whopper announced last week in California.

This is an important part of fighting climate change because the combination of renewable energy and battery storage can function much like a traditional power plant, capable of being dispatched when needed by grid operators during times of high demand, and replacing the functions that are now mostly carried out by natural gas power plants.

Southern California Edison says construction will be complete by August 2021, which is a quick turnaround, especially considering the size of the projects.

Yayoi Sekine, an analyst for BloombergNEF, told me it is noteworthy that most of the projects will be built next to existing solar arrays.

“This is interesting because they may demonstrate the potential of retrofitting solar projects that may otherwise be delivering low- or negative-priced solar to the grid,” she said.

The use of batteries allows solar arrays to store their electricity at times of low electricity prices and sell it a few hours later when prices are higher. 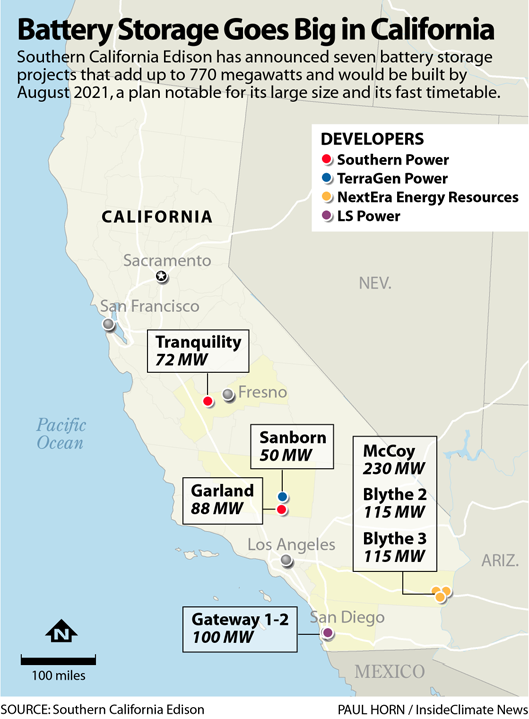 Sekine noted that the projects are moving forward on a rapid timetable even with the disruption to the economy caused by the coronavirus. “It will be impressive if and when these projects are commissioned as a test of resiliency against this pandemic,” she said.

Southern California Edison said the projects are in response to concerns raised last year by the California Public Utilities Commission. The commission said that there was a danger the grid could become unreliable as fossil fuel power plants close and are replaced with intermittent resources such as wind and solar. Utilities need to find a way to navigate these challenges, while also staying on track to meet state standards for reducing greenhouse gas emissions.

The utility accepted bids from four developers. NextEra Energy Resources of Florida has the most projects, with three, and will also be building the largest one, the McCoy storage project in Riverside County, which will be 230 megawatts and located next to the 250-megawatt McCoy solar array.

For some perspective, the 300-megawatt Moss Landing project, located in central California, will be the largest battery storage project in the world when it opens near the end of this year, according to developers. The project is being led by a different utility, Pacific Gas & Electric.

But the Moss Landing storage plant won’t wear that crown for long. The Manatee Energy Storage Center in Florida, scheduled to go online in late 2021, will be 409 megawatts. Right now, that would make it the largest.

But this is a fast-moving space, with companies announcing big projects so often that it is difficult to keep track of them all. To give an idea of the pace, these new projects from Southern California Edison alone add up to more than more than double the 293 megawatts that went online last year in the United States, according to BloombergNEF.

But you’ll notice I haven’t said how much the Southern California Edison projects will cost. A spokesman told me the deal is subject to a “robust competitive process” whose terms must be approved by state regulators. But the specifics, he said, including the costs, are not being made public.

As Wind and Solar Keep Getting Cheaper, Are They Wrecking Their Own Market Value? 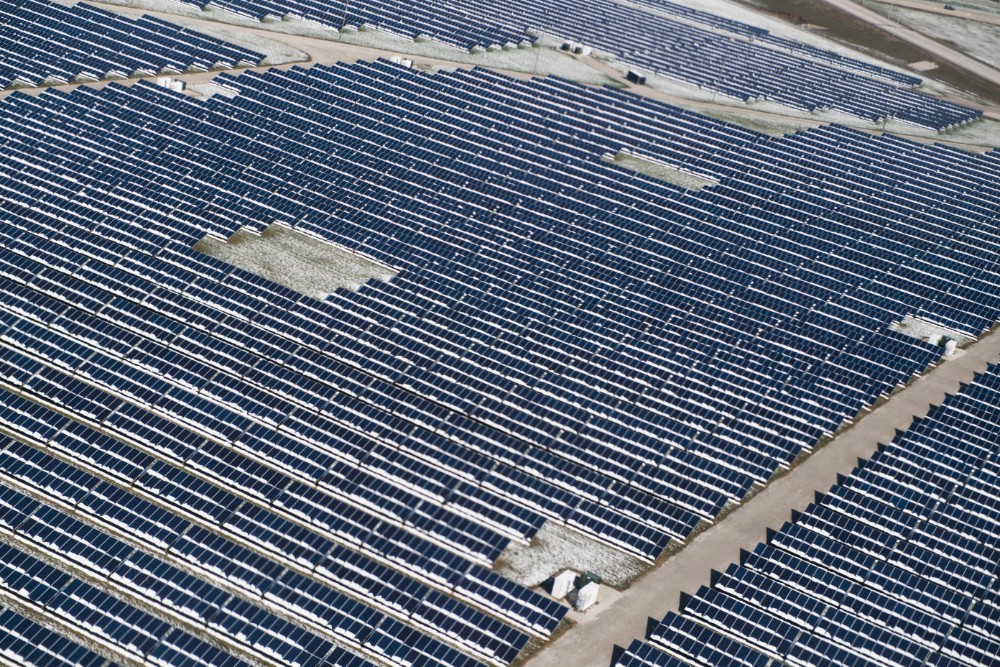 A fundamental assumption about the clean energy economy is that the costs of wind and solar will continue to decrease, helping to accelerate a transition away from fossil fuels.

But this long-term trend can’t continue indefinitely, because, at the same time, the growth of wind and solar is driving down electricity prices, making it more difficult for businesses that sell electricity to make a profit.

A new paper in the journal Renewable Energy looks ahead to see what is likely to happen in this race between declining costs and declining revenue. The paper shows that the two factors largely cancel each other out for at least the next decade, which leaves room for projects to remain economically viable.

So the answer to the question in the headline is, “No,” or at least, “Not any time soon,” which is good news for the transition to clean energy and provides some fresh insights into the economics driving the transition.

But this doesn’t mean the market would blow up once we get beyond 10 years. Changes probably would be gradual, over years or even decades, and would indicate that the country has made giant steps toward a cleaner grid.

The findings are especially relevant right now in California, the country’s solar power leader, where the grid sometimes has more electricity than it can use on sunny days, leading to prices that sometimes fall below zero. It also matters in the Great Plains, where wind energy is king, and electricity prices plummet on windy days.

The co-authors used 2016 data to create a model of how the prices and market value of solar and wind would change in the various grid regions of the United States, as the amount of wind increases by six times and solar increases by 10 times. The different levels of growth reflect that the United States already has built a lot of wind farms, while solar development is still at a relatively early stage, and so is likely to grow more.

Under the scenario used by the researchers, solar’s cost and market value would each go down about 50 percent during the decades that would be needed to build that much solar. In dollar terms, the average revenue of a solar array would go from roughly $30 per megawatt-hour to $15 per megawatt-hour.

Wind energy is more vulnerable than solar to a substantial level of loss to its market value, and the model projected its average revenue would drop from $28 per megawatt-hour to $8 per megawatt-hour. But Hittinger says this level of deployment is a long way off, and the economics of wind energy are still sustainable for a long time.

While the paper focuses on wind and solar, there also are some major implications for coal and nuclear plants, which have higher fixed costs of operation, and for older and less efficient plants that run on natural gas. The falling price of electricity would harm their ability to compete.

Hittinger describes this as “putting the squeeze” on other types of power plants.

We’ve seen that older plants are already struggling, leading some states to subsidize their nuclear plants and the continuing closings of coal-fired plants because of competition from renewables and natural gas.

But don’t lose sight of the economic force that’s setting off this chain of events: Manufacturers are making renewable energy components much less expensively than before.

As prices fall, and as state governments pass policies that require emissions-free power, developers are responding by building lots of wind and solar.

I expect to see a lot more talk in the next few years about how the introduction of all that renewable energy affects the fundamentals of the electricity market. This paper from Hittinger and his colleagues is a good starting place to get an idea of some of the big issues.

Virginia’s new clean energy law is already leading to some rapid changes in the way the state’s largest utility, Dominion Energy, is planning for the future.

Dominion just issued a new 15-year plan for power plants in the state, and it shows big increases in solar, offshore wind and energy storage.

The shift follows Gov. Ralph Northam’s signing of a measure last month that says Virginia’s large utilities must get to 100 percent carbon-free electricity by 2045, and all other electricity providers must reach that point by 2050.

Some of Dominion’s plan—such as the offshore wind component—was already known, but much of this is new to the public.

Still, environmental groups are not happy that Dominion is also proposing to build at least 970 megawatts of new natural gas capacity, something they oppose and say is not necessary.

The plan now goes to the Virginia Corporation Commission, which has the final say over what Dominion will be allowed to implement.