The Super Bowl champion, is one of the NFL’s most outspoken activists, and has experienced police brutality first hand. He opens up about the protests and the NFL’s BLM about-face. 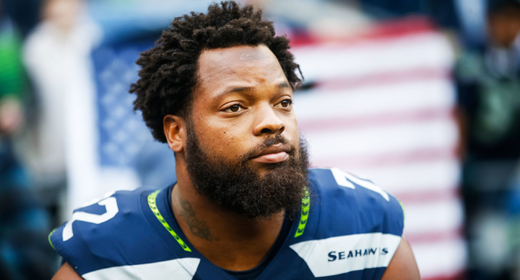 Finally, after four years spent treating racism as a public relations problem that could be solved with celebrity partnerships, some staged bits of solidarity, and a few extra millions, NFL Commissioner Roger Goodell said outright that they had failed its majority Black athletes, coaches, and team officials. “We, the NFL, admit we were wrong for not listening to NFL players earlier and encourage all to speak out and peacefully protest,” he said in a direct -to-camera video posted to social media late Friday evening. “We, the NFL, believe Black Lives Matter.”

All it took for the league to utter a painfully obvious truth was the broadest protest movement in U.S. history—one that spanned all 50 states and has since gone international—with scores of NFL stars taking to the streets and making their voices heard.

But Michael Bennett, a star defensive end who has spent years fighting for civil rights and taking the league to task, isn’t sold on the commissioner’s sincerity. Not yet, anyway.

“[Goodell] saying that Black Lives Matter is almost like a slap in the face,” Bennett said when reached by phone. For decades, “Black talent has been exploited at a high level in the NFL. He knows Black Lives Matter, because without black players the NFL wouldn’t be as lucrative as it is.”

Like all the other pro-sports leagues, individual teams, and scores of non-sports brands, the NFL has clearly taken note of the dramatic swing in public opinion polling over the last few weeks. Now, a majority of Americans back both the goals of the protests and the protesters themselves. (NASCAR even went so far as to ban the display of the Confederate flag on Wednesday.) Secure in the knowledge that their majority-white fan base probably won’t recoil and impact revenue, the NFL was able to state the obvious, and “acknowledge the systemic racism that they have been privileged from and benefited from,” he said.

While admissions of wrongdoing are all well and good, the NFL’s actions need to match their aspirations, Bennett insisted. Until then, the question still remains: “Is the intent of the NFL to really make a positive impact or is it not to be seen as if they don’t respect the players?”

Should the players relent, it would give the league the opportunity to backslide. “We have to continuously push the NFL to change its core values and change its moral compass on a consistent basis,” he said. “If not, shame on us and shame us for real. We have the opportunity to hold Roger Goodell and the rest of the bosses,” including team owners like Jerry Jones, he said, to account, and face “the reality of the suppression and oppression of the people.”

For Bennett, the hypocrisy is self-evident. Well-crafted—or even grim and ironic—PR efforts can’t erase the owners’ backing of Donald Trump.

“If you’re supporting him, then your letter is really null and void.”

That Bennett is demanding more than lofty promises should come as no surprise. Originally signed as an undrafted free agent after graduating from Texas A&M in 2004, the Louisiana-born and Houston-raised 14-year veteran grew into one of football’s most dominant pass rushers. Wearing his trademark miniscule shoulder pads, the 6-foot-4, 270-pounder has racked up three Pro Bowl appearances over the course of his career, snagging a Super Bowl ring in 2014 during his first stint with the Seattle Seahawks. Beyond the accolades he earned on the field, Bennett has emerged as one of pro football’s most vocal and visible advocates for social justice. As The Undefeated put it, Bennett very much is, “an activist disguised as a professional football player.”

In 2016, Bennett wore a Black Lives Matter T-shirt during a presser while imploring his NFL brethren not to remain silent when it came to social and political issues. The year prior, Bennett calmly explained to then-Seahawks star cornerback and teammate Richard Sherman why black-on-black crime had little to do with the Black Lives Matter movement. He offered a full-throated endorsement of Bernie Sanders during the 2016 and 2020 campaigns. (Sanders wrote a glowing blurb for Bennett’s 2018 memoir, Things That Make White People Uncomfortable.)

In 2016, Bennett wore a Black Lives Matter T-shirt during a presser while imploring his NFL brethren not to remain silent when it came to social and political issues.
His nonprofit The Bennett Foundation serves at-risk children, providing educational opportunities and nutritional programs both in Hawaii, where he resides in the off-season, and across the U.S. In 2017, Bennett backed the worldwide strike held on International Women’s Day. In an article published by The Players’ Tribune, Bennett explained his reasons for doing so.

That same year, he donated the entirety of the cash he earned in endorsements to nonprofit entities serving communities of color; co-signed the proposal sent by The Players Coalition insisting that the NFL back a slew of social justice causes, including education reform, community-building efforts, and support legislation addressing mass incarceration; and when Bennett discovered a promotional trip to Israel organized by the New England Patriots owner Robert Kraft would be little more than a gauzy attempt at sportswashing, he refused to participate. As he explained in an Instagram post, he couldn’t participate in any venture that elided the suffering of Palestinians. And so, “I will not be used in such a manner,” he wrote.

In an appearance on Democracy Now! discussing how Bennett’s public declaration gave other NFL players the space to pull out of the Israeli venture, Dave Zirin, the sports editor for The Nation, said: “Courage is contagious. So when Michael Bennett speaks out, you see the ripple effect across the NFL, across the sports world and across sports fandom, as well.”

When Bennett talked with The Daily Beast in early June, the protests over the killing of George Floyd by the Minneapolis Police Department were a week old. The conversation turned to what, at the time, seemed to be a stark pivot in the national mood. Namely, that unlike with Michael Brown, or Eric Garner, or Laquan McDonald, or even Tamir Rice, at least one of the usual culture war fault lines hadn’t opened up—the furrowed-brow delving into the background of those whose lives had been taken by the police, and the at-times unsaid implication that they were responsible for their own death.

Those making that bad-faith argument aren’t actually concerned with the facts at hand, according to Bennett. “They’re trying to keep order,” he said. “And if you look at the justice system, the symbol of blindfolded justice…In reality, Lady Justice has never really been blind. She’s maybe been white blind but she sees in color very well.”

In August 2017, Bennett trekked to Las Vegas to attend the Conor McGregor-Floyd Mayweather fight. Afterwards, as he was leaving the casino and heading back to his hotel room, a sound that was initially assumed to be gunfire rang out, and Bennett took off. (The actual cause was a metal velvet rope stand that had clattered to the ground.) The cops, for reasons unknown, pursued Bennett—Bennett alleged he’d been “profiled.” They found him hiding behind a partition and ordered him onto the ground. While in handcuffs, an officer put his gun to the back of Bennett’s head, and explicitly threatened that if he budged an inch, he would “blow my fucking head off,” said Bennett.

All I could think of was ‘I’m going to die for no other reason than I am black and my skin color is somehow a threat.

Only after he’d been taken into a police cruiser and identified himself as a star athlete was he let go. The experience was “terrifying,” Bennett wrote at the time, “All I could think of was ‘I’m going to die for no other reason than I am black and my skin color is somehow a threat.’”

Initially, the Las Vegas Metropolitan Police Department and its union tried to smear Bennett, calling him a liar, and mentioning his protests during the anthem, as if that bore any relevance at all. (The false trope that Bennett is “anti-American” was translated into a bizarre, Photoshopped meme popular in right-wing circles showing him dancing in the Seahawks’ locker room holding a burning flag.) Eventually, footage from body cameras backed up Bennett’s version of events, though the Vegas police still insisted otherwise.

In a recent episode of Mouthpeace with Michael Bennett & Pele Bennett, a podcast Bennett and his wife co-host, the couple talked about how Floyd’s death hit home. Seeing images of the violence being wrought upon people of color, the omnipresent shared videos and phone calls, “it’s something that sticks, how it felt like a sharp pain in my chest,” Pele said, much like when she first learned what happened to her husband in Vegas. Her voice begins to crack as she describes a pervading and lingering sense of fear, like a “cloud” waiting to descend.

As a mother of three daughters, ages 13, 9, and 7, she is determined to remain vigilant, knowing there are lessons to be doled out and strengths to be imparted. Still, “You’re tired of being tired, you’re tired of fearing, you’re tired of that cloud over you,” she said.

Bennett is still fielding offers from NFL teams, but plans to play in the upcoming season, whenever it kicks off.  When his career does come to an end, graduate school remains an option, possibly with a focus on theology. His work as an activist will continue regardless. As has been the case throughout American history, Bennett said, the way forward will inevitably be led by those who’ve suffered the most.

“The people who are being oppressed, they really change the narrative, because it’s their direct lived experience,” said Bennett. As is the case with the NFL, it’s impossible for him to determine whether this movement has legs.

“The jury’s still out on that,” he said. “That’s a question that a lot of white people have to ask themselves.”