by Sriram Emani: Using batteries for a more efficient and cleaner way to back up power… 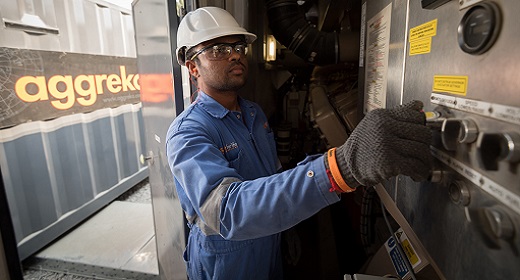 Actors have their stunt doubles, great musicians have their understudies, and sportspeople have substitutes – someone to step in when they’re out of action and ensure that the show goes on. But it’s not just sports and showbiz that benefit from having a reliable back-up. In the energy sector, back-up generators are used to ensure that the lights stay on, no matter what happens.

When it comes to energy systems, back-up in the form of so-called “system services” is traditionally provided by fossil fuel-based generators. They must be ready to quickly balance the grid should there be any peaks in demand or sudden disruption in supply and, in some situations, be capable of getting power stations back up and running when a generator trips offline.

The problem is that thermal generators take some time to fire up, meaning they can’t react instantly, especially when they first have to cold start. Given the grid must be able to immediately accommodate the loss of the largest generator in its network with little interruption in service, a slow lead time isn’t an option. Instead, these thermal generators stay on constant standby, so that they are ready when called upon to support primary generators. This makes them a physical ‘’spinning reserve’.

Whilst this means that power can be reliably backed up, it also results in higher carbon emission and fuel costs, as thermal assets continue to generate power even when the grid is already fully supplied by renewable sources. In some cases, this may even lead to a situation whereby renewable generation has to be kicked off the grid to make space for the so-called “must-run” spinning reserve capacity.

In recent years, battery storage technology has developed to the point that it provides a much better alternative. With its ability to provide grid services within milliseconds, a battery storage system can effectively replace spinning reserve generators through so-called “synthetic inertia”.

This battery-based model not only removes the need for fossil fuel-based generators to be running constantly to provide resilience, it means that the other generators in the system, which no longer require the extra headroom of spinning reserve, can be utilised more efficiently, increasing their average load.

The overall effect? Lower fuel costs, lower operations costs, lower emissions and an increased lifespan for the thermal generators on the grid.

Benefits for a remote set-up

The benefits of this technology are also obvious at an industrial site or in a remote community. A system that incorporates battery storage in this way reduces the number of generators necessary to service the same level of demand limiting the number of assets that need maintenance and upkeep when parts are in short supply.

A prime example of this system is found in Sierra Chata region of Argentina, a remote oil-producing region in the west of the country. Here, a fully-integrated hybrid power system installed by my company powers the operations of oil & gas company Pampa Energía. Thermal generators using gas from the surrounding gas field are the primary power source, but the system also incorporates 1 MW of backup battery power, a first for Aggreko in Latin America. The battery is constantly on hand should any of the thermal generators trip offline, ensuring a continuity of service no matter what happens.

Incorporating a battery in this way allowed for greater efficiency and fuel performance by the system and reduced the consumption of gas by between 13 and 20% when compared to a traditional model. The end result? A reliable, efficient system that reduced fuel costs while ensuring lower emissions.

From the Pampa to the desert

We have also installed a 24-MW gas-battery hybrid power system at United Steel Industries’ Fujairah steel mill in the United Arab Emirates, which supplies 1.1 million tons of steel components to the construction and manufacturing sectors in the UAE and beyond.

A range of specialized mobile and modular power equipment is used on the site, including 13 gas generators, delivering 19 MW of primary power, backed up by a 5-MW battery system. The battery system removes the need for a spinning reserve to be provided by other generators and acts to balance out sudden jumps in the mill’s load.

Traditionally, these spikes would have been managed by diesel generators that run constantly at part load, at great cost to both the mill and the environment. Aggreko’s hybrid solution will deliver a 49% savings in fuel cost, while also significantly reducing the company’s carbon emissions.

Battery storage can be used at almost all generator-supported locations that would require a significant amount of system services – especially remote communities and off- or weak grid industrial operations. Switching to this option means fuel and cost savings; improved generator utilization; reduced operating time and maintenance; and lower emissions. Such an approach is field-tested, environmentally friendly, and provides a high level of stability and performance.

Such benefits have been proven time and time again, from the Pampa to the desert, without sacrificing reliability. Now that’s progress.