by Adele Peters: And by 2045, the electric grid could be entirely renewable… 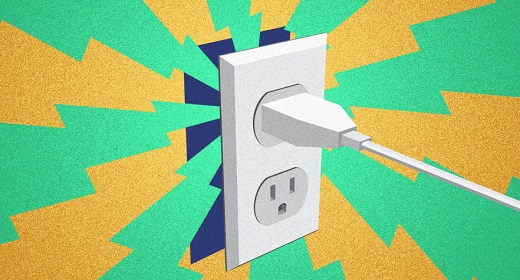 Until recently, climate experts projected that it wouldn’t be possible to decarbonize the electric grid until 2050—and that moving to fully renewable energy could raise the price of electricity for consumers. But the cost of wind, solar, and battery storage has fallen so quickly that in just 15 years, the U.S. could feasibly run on 90% clean electricity, with no increase in electric bills. And adding new renewable infrastructure could create more than half a million new jobs each year. By 2045, the entire electric grid could run on renewables.

“We wanted to look at how quickly could we replace the existing polluting generation with zero-carbon generation without raising electricity bills at all for customers,” says Sonia Aggarwal, vice president at the nonprofit Energy Innovation, who served on the technical review committee for the new report from the University of California, Berkeley. “I didn’t expect that we were going to get 90% by 2035. It’s really exciting that this is the moment that we’ve reached in this country, where the costs have just changed so much that this is now within our reach, in a way that it wasn’t even five years ago.”

Since 2010, the cost of utility-scale solar power has dropped 82%, according to a recent report from the International Renewable Energy Agency. Onshore wind power has fallen in cost by 39%. While outside observers might have expected the cost of renewables to eventually level off, “it really is similar to the computer chip industry with Moore’s law,” she says. “We’ve just seen continual cost reductions.”

A landmark climate report in 2018 emphasized that the world’s carbon emissions need to be cut in half by 2030 to avoid the worst impacts of climate change. The new study finds that the U.S. could reach 70% renewable electricity by 2030, reducing economy-wide emissions by 18%, and getting closer to the ultimate goal. By 2035, renewables can cover 90% of electricity production, with natural gas covering rare spikes in demand if the supply of renewable energy is temporarily low, cutting emissions by 27%. By 2045, it’s anticipated that renewables and battery storage can supply the grid all of the time, as new innovations in technology will make it possible to cover the last 10% of demand.

Renewables have become so cheap that they’re beginning to beat the cost of continuing to run existing coal-fired power plants. But while the economics mean that utilities will naturally shift to renewables, it will still take federal policy to make it happen as quickly as is necessary for climate change, the report says. One key will be a federal clean energy standard that sets out goals for increasing renewable supply: 75% by 2030, 90% by 2035, and 100% by 2045. “That would just really help set that demand signal for the market and ensure that developers and states and utilities are really clear about what is the pathway for replacing the existing generation with cleaner sources,” Aggarwal says.

The technology is ready for large-scale deployment at exactly the moment when the U.S. is poised to make large investments in infrastructure to help the economy recover from the COVID-19 crisis. As the country builds out new renewable power plants, it would create 570,000 new jobs each year; because the cost of renewables has fallen so much that it makes economic sense even in areas that aren’t unusually sunny or windy, those jobs would be distributed across the entire country.

And as that happens, emissions will drop. “This huge opportunity to get the vast majority of the emissions out of the electricity sector is right before us now,” says Aggarwal. “And we can go a lot faster than people thought we could before.”