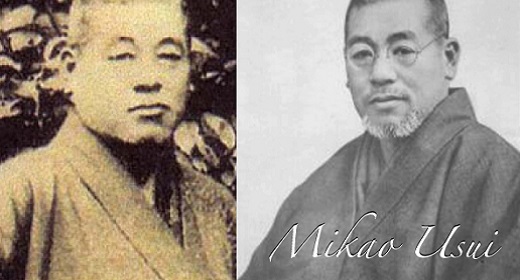 He was born on August 15, 1865, in the Yamagata region in Japan. His family was of Buddhist traditions and lived there for 11 generations.

Mikao Usui was sent to a Buddhist monastery to start his education from a very young age (around 4 years old). There he took quite a lot of interest in psychology, medicine and various religions from around the world.

Before Japan’s rough period of isolation from the western world, Mikao Usui managed to travel to Europe, America, and China and learned about western cultures and civilizations.

After spending his years in the turmoil of Japanese society, Mikao Usui went for higher education. It is believed he became fluent in English, Chinese and Sanskrit, took an interest in philosophy, western medicine, and theology. He also became a doctor in Japanese literature.

During his life, he had many professions such as Private Secretary, Postmaster General, missionary, reporter, office worker, and others.

Usui had 3 siblings: two brothers, Sanya who became a doctor, and Kuniji who became a policeman, and a sister, Tsuru.

The whole family’s ashes are buried at the Saihoji Temple in Kyoto.

The story goes that around the year 1900, Mikao Usui had a near-death experience becoming very ill during an epidemic. This had a life-changing effect and made him reflect upon his life.

He started studying esoteric Buddhist holistic healing and he became interested in the teachings of spiritual healers.

Later on, he became a Shingon Buddhist at the advice of a priest, who saw in him the immense potential and accepted him as a student.

Unfortunately, this led to his expulsion from his family as they would not agree with this new path.

But this didn’t stop Mikao Usui from pursuing his dream in finding a higher spiritual path.

Contrary to some beliefs that Mrs. Hawayo Takata constructed a story that Mikao Usui desired to find the Christic healing ways and that he was inspired by the Bible, Dr. Usui wanted to find and understand the higher stage of consciousness that we are all able to achieve.

Therefore, at the advice of his teacher and fellow monks he went on a spiritual quest on Mount Kurama, a place of significant spiritual past, for the Japanese people.

The 21 Days on Kurama Mountain

His purpose was to achieve ”Satori” – which translates as “enlightenment”. Usui was aware that such a quest is not going to be easy, so he started a long ritual of fasting, meditation, and prayer.

After a long and tiring 21 days, he fell into a deep meditative state. It was then when he received a strong beam of bright, white light, shining directly on his head. He also had a vision of the Reiki symbols and how to channel the light through them.

He started having a sudden feeling of awakening and excitement and went down the mountain. He was eager to share his experience with his teacher and fellow priests.

The story goes that while ascending from the mountain, he stubbed his toe on a rock and fell. He placed his hand over his toe and the healing energy began flowing from his hands.

The pain went away and he was healed.

Usui was amazed by this and he realized that apart from the strong “enlightenment” feeling, he gained the ability to heal.

That is when he had an epiphany: his life purpose was achieved; he now had to heal others and teach them what he has learned.

He went to help people in need from the nearby villages, all the way up to Tokyo. There he eventually started a healing society named: Usui Reiki Rhoyo Gakkai (Usui Reiki Healing Method Society).

In 1923 there was a great earthquake that struck Tokyo and Yokohama with a 7.9 on the Richter Scale. Unfortunately, over 140.000 people died. Many were killed in the fires that started due to the massive earthquake.

Mikao Usui and his students gave as much healing as possible during that time. Usui Sensei received an honorary award from the Emperor for his great help.

Because of the consequences of this disaster, Usui opened at one point an even larger clinic in Nakano, Tokyo. Having amazing results, his reputation spread all over the country. This led to initiating more than 2000 students in his lifetime.

Out of these, 20 were considered “Shihan” – Masters/Teachers of Reiki. Cujiro Hayashi was one of them. He would later become Grand Master.

During this time Mikao Usui developed the Reiki levels (Shoden, Okuden, and Shinpiden) and helping techniques such as “Byosen” – Scanning, “Gassho” – praying position and others.

These provided the student with a gradual, secure and linear progress, without overflowing one’s mind and life.

He cultivated the five admonitions recommended by Emperor Meiji, which later became known as the Reiki principles:

The 3 Things You Have To Remember About Mikao Usui

Even if Reiki has its history before Usui, he still remains the most important figure and is considered the father of Reiki as we know it today.

There are many things to say about him and so much has been given to us through his legacy.

But if there were 3 things to remember about Mikao Usui, I believe these are the ones:

About Mikao Usui’s Death, Where He Is Buried And The Inscription On His Memorial Stone

On March 9, 1926, Mikao Usui was in Fukuyama and suffered a stroke which led to his death at 62 years old. His body was burnt and his ashes placed next to where his family is buried, in Saihoji Temple, Tokyo. 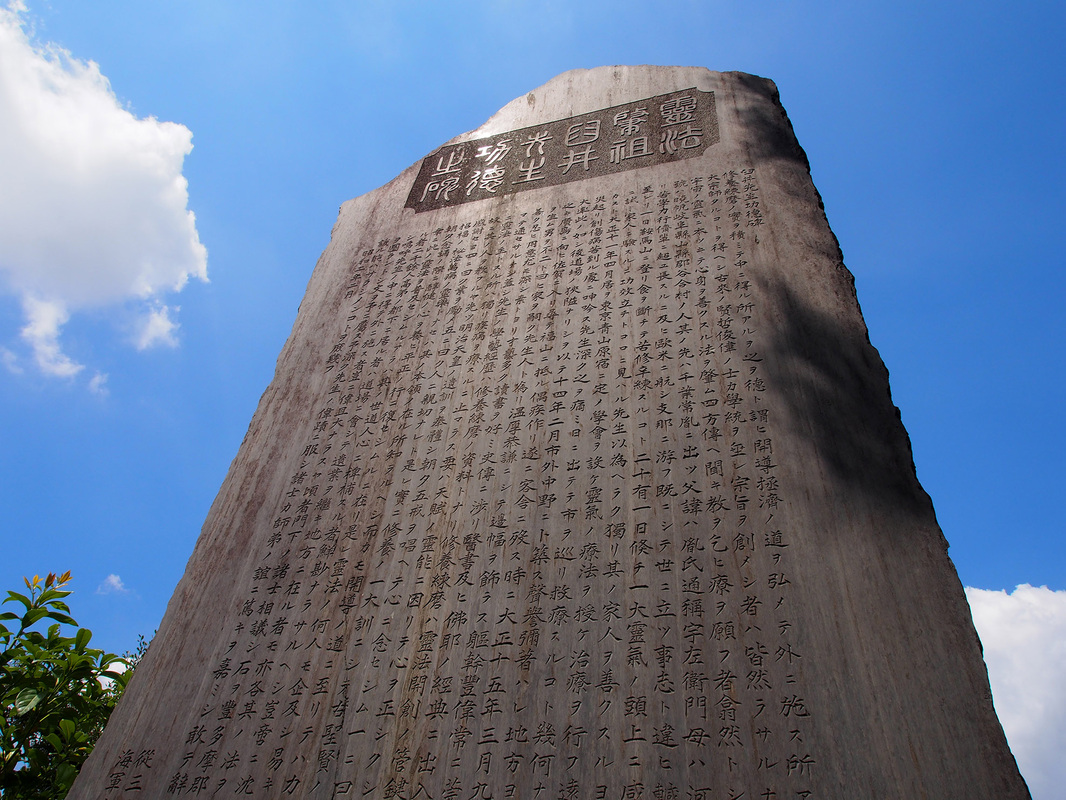 His students placed a memorial stone in 1927 with the title “Memorial of Usui Sensei’s Virtue.” This follows with Usui Sensei’s story from their perspective engraved on the stone.

The first paragraph from the text on Mikao Usui’s gravestone:

What you can naturally realize through cultivation and training is called “VIRTUE” and it is called “MERIT” to spread a method of leadership and relief and practice it. It is people of many merits and a good deal of virtue that can be eventually called a great founder. People who started a new learning and founded a fresh sect among sages, philosophers, geniuses etc., named from the ancient times, were all those as mentioned above. We can say that Usui-Sensei is also one of those people.

Read the rest on reiki.org

As a side note, you should know that there are many versions of Mikao Usui’s story out there. The one in this post has the generally known data as well as information I have gathered from Reiki Teachers who studied under Hiroshi Doi, one of Reiki’s iconic names.

But the numerous versions are not important…

What is important is his legacy and what he left behind after his passing.

Mikao Usui’s teachings and the fact that we have access to such an amazing and beautiful way of making our lives better is what we should remember.

Reiki teaches us how to place our body in a state of healing, a way of life and also a form of spiritual evolution.

This is how you pronounce Miako Usui: me ka o u shu e [mi kɑ oʊ ju ʃu i]

A Few Of Mikao Usui’s Quotes That Inspired Me

Mikao Usui’s quotes are very inspirational and full of wisdom. Like any other person who has lived a century ago, we should not take everything word by word.

What matters is the message behind Usui Sensei’s Quotes, and how they can help you find peace when you are down, and become wiser when you lack inspiration.

“Reiki is wisdom combined with energy; it connects us to the universal source of light, it stimulates growth, it balances us from a physical, mental and spiritual point of view, it can heal the deepest wounds and it can bring to the surface the unknown potentials of our being.”

“Reiki is optimum health support. It is like a vehicle to our interior truth, which guides us to happiness. Happiness is the path to healing ourselves.”

“Reiki does not belong to one person or one community, but it is the spiritual heritage of all humanity.”

“Each and every being has an innate ability to heal as a gift from the gods.”

“Reiki is love. Love is wholeness. Wholeness is balance. Balance is well-being. Well-being is freedom from disease.”

Be kind to yourself and every living thing.

I can’t stress enough that the important thing to take from all of this is Mikao Usui’s legacy.

Reiki is not only a gift for us who practice it but a gift to the world.

Let’s embrace the spiritual meaning of his journey through life, and worry less about exact facts.

Vlad is a Usui, Karuna, Shamballa, and Gendai Reiki Grand Master with 15+ years of experience. He went through ups and downs like all of us, but what sets him apart is his ability to experiment new and unconventional things in order to grow as an individual and evolve as a Reiki Master. Vlad loves to explore new cultures, talk to people and exchange ideas. Time has come though, to make that next step: “It’s never good to isolate knowledge therefore it’s now time to share my learnings with others”. You can always read more about Vlad and ReikiScoop in the about section.

MORE ReikiScoop? – Here’s what you can do next: