by Jon Brodkin: Ambitious legislation would deploy 100Mbps symmetrical broadband throughout US… 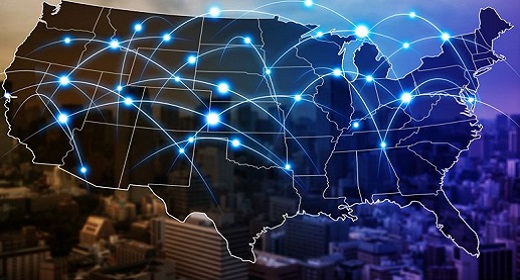 “The House has a universal fiber broadband plan we should get behind,” Electronic Frontier Foundation Senior Legislative Counsel Ernesto Falcon wrote in a blog post. House Majority Whip James Clyburn (D-S.C.) announced the Accessible, Affordable Internet for All Act, saying it has more than 30 co-sponsors and “invests $100 billion to build high-speed broadband infrastructure in unserved and underserved communities and ensure that the resulting Internet service is affordable.” The bill text is available here.

In addition to federal funding for broadband networks with speeds of at least 100Mbps downstream and upstream, the bill would eliminate state laws that prevent the growth of municipal broadband. There are currently 19 states with such laws. The Clyburn legislation targets those states with this provision:

No State statute, regulation, or other State legal requirement may prohibit or have the effect of prohibiting any public provider, public-private partnership provider, or cooperatively organized provider from providing, to any person or any public or private entity, advanced telecommunications capability or any service that utilizes the advanced telecommunications capability provided by such provider.

The bill also has a Dig Once requirement that says fiber or fiber conduit must be installed “as part of any covered highway construction project” in states that receive federal highway funding. Similar Dig Once mandates have been proposed repeatedly over the years and gotten close to becoming US law, but never quite made it past the finish line.

The US is behind on fiber

“America is behind on its transition to a 21st-century, fiber-connected Internet with no plan for how to fix the problem,” Falcon wrote. But Clyburn’s bill “would begin a national transition of everyone’s Internet connection into multi-gigabit capable fiber optics… and is likely heading towards a vote on the House floor as part of the overall COVID-19 recovery effort. After that its future remains in the hands of the Senate.”

The Democrats’ bill is highly unlikely to become law in its current form because Republicans control the Senate and White House. FCC Chairman Ajit Pai this week endorsed a Republican bill that includes $6 billion for broadband. Another Republican plan announced last week didn’t have a dollar figure attached to it but promises funding and “regulatory relief” for telecom companies.

The Democrats’ bill “is the right legislation at the right time as the COVID-19 pandemic has laid bare the need for every American to have robust, high-speed broadband Internet access at home,” according to Gigi Sohn, a former Obama-era FCC official and current distinguished fellow at the Georgetown Law Institute for Technology & Policy.

Sohn, who was a counselor to then-FCC Chairman Tom Wheeler from 2013 to 2016, wrote that the bill “addresses the twin problems of broadband affordability and lack of network infrastructure, recognizing that the digital divide is both an urban and a rural problem. And it would promote competition in the broadband market by preferencing open-access networks and repealing anticompetitive state laws that prohibit communities from building their own broadband networks.”

One key aspect of the bill is that it requires federally funded ISPs to provide low latency and speeds of at least 100Mbps for both downloads and uploads. The bill also defines “unserved” areas as those lacking options with download and upload speeds of 25Mbps. By contrast, the FCC’s current, five-year-old broadband standard is 25Mbps downstream but only 3Mbps upstream. “These higher metrics [for both downloads and uploads] are what make this a fiber infrastructure bill as older legacy networks such as DSL cannot effectively deliver these speeds,” Falcon wrote.

Funded projects must also provide broadband at prices that are “comparable” to or lower than what’s available in areas that already have broadband access, the bill says.

What else is in the bill

As Clyburn’s announcement explained, the Democrats’ bill includes these provisions:

The $80 billion would be appropriated to the FCC “for fiscal year 2021, to remain available until expended,” the bill says. The FCC would be required to distribute the money through a competitive bidding process, similar to how its current programs work. But the commission would have to award 75 percent of the funding within 18 months “to expand access to broadband service in unserved areas and areas with low-tier service.” Low-tier is defined as less than 100Mbps downloads or uploads. The FCC’s biggest broadband-funding plan right now is for $20.4 billion over 10 years, or about $2 billion a year.

Falcon argues that a plan like Clyburn’s is needed for the US to deploy fiber throughout the country within a few years instead of decades. “Such an ambitious program would have the United States match China’s efforts to build universal fiber with the US completing its transition just a few short years after China,” Falcon wrote. “Without this law, the transition would take decades.”

Falcon also praised the legislation for “emphasiz[ing] open-access fiber networks that would replicate the success in Utah, where people are getting a dozen options for low priced gigabit and ten-gigabit services, including in rural markets.”