A Car-Free Future For Central Dublin

by Feargus O’Sullivan: Last week, the city council unveiled a plan to banish cars from key sections of the congested city center by 2017… 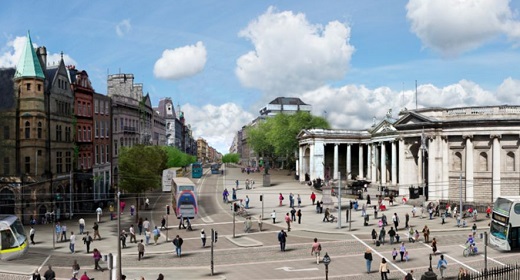 Dublin is on the brink of becoming one of the most pedestrian-friendly capital cities in all of Europe. Last week, the city unveiled a €150 million ($168.5 million) plan to banish cars from key sections of the city center by 2017. If the plan passes its public consultation on July 16th, major hubs will be pedestrianized while other key streets will allow only public transit and deliveries. It’s a radical turnaround for a city whose reputation for appalling traffic saw it named the 10th most congested in the world last year.

According to figures released by Dublin’s city council, the city center is the arrival and departure point of 192,000 journeys every weekday, 33 percent of which still take place by car. The streets weren’t designed with cars in mind, so the daily influx leaves roads clogged and air noxious and soupy. Left unchecked, the situation stands to get even worse. Ireland’s economic recovery is set to concentrate yet more activity within Central Dublin, and the city council predicts an extra 42,000 journeys every day by 2023. Should the same proportion of commuters arrive by car as now, that would mean almost 14,000 extra car journeys daily, a huge number for a city that contains barely more than 500,000 residents within its city limits.

Given this degree of congestion, the car-free revamp is something central Dublin absolutely needs. Its dense, congested knot of historical streets could easily be wonderful if it didn’t seem so harried by traffic. Now some of the most beautiful corners in the city will get the sense of space and ease they need to blossom.

The car-free plan’s bold target: Reduce the proportion of daily car commuters from 33 percent to 20 percent in just two years.

College Green, the triangle of land between Ireland’s neoclassical parliament and the equally grand Trinity College, will become an entirely car-free square. Grafton Street, the city’s (already partially pedestrianized) main shopping parade, will be joined to St. Stephen’s Green park by another car-free plaza. There, car lanes will be paved over and given up to café terraces shaded with trees, which should help connect the green space of the park with surrounding streets. Further north, the banks of the River Liffey at Bachelor’s Walk and George’s Quay will be transformed from fume-filled rat runs into waterside promenades where the only private vehicles allowed will be delivering goods. The major streets that thread all these together would be blocked as through-routes and receive ­new cycle and bus lanes.

In addition to the car-free plan, the city is already sinking €368 million into a major extension to its light rail network, extending it to the northeast on a line that will begin service in 2017. The pedestrianization plan sets another bold target. The city council wants to reduce the proportion of daily car commuters from 33 percent to 20 percent in just two years.

But where will all these drivers go? A proportion will likely begin taking the light rail extension, while Dublin also plans to increase the frequency and capacity of bus and train services. A new network of cycle lanes—segregated from other traffic “where appropriate” according to Dublin Council’s brief—will be created, while some streets that are one-way for cars will be made two-way for bikes. There’s also talk of creating Bus-Rapid Transit and building new bridges in the city’s docklands to take the heat off river crossings downtown, though these are currently being presented as recommendations rather than proposals.

Right now, the plans may seem bold, but they’re really part of a pro-pedestrian wave across Europe that has seen similarly radical plans for the centers of Paris, Brussels and Madrid. In other words, this could be the new normal. In 50 years time, pedestrians may find themselves walking through a cleaner, greener Central Dublin, laughing to themselves at the idea that cars were ever allowed to spoil it.