by Rachel Nuwer: Millennials and older adults lead the surge while Gen Z stays on the sidelines… 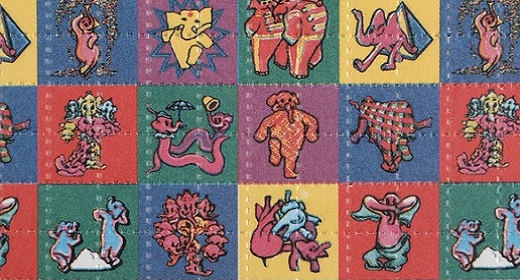 In the years leading up to the roaring 2020s, young people were once again dropping acid. Onetime Harvard psychologist Timothy Leary died almost 25 years ago, after which some of his ashes were launched into space. But from 2015 to 2018, the rate of “turning on and tuning in” with LSD, to paraphrase Leary, increased by more than 50 percent in the U.S.—a rise perhaps fueled by a need for chemical escapism. Those results were published in the July issue of Drug and Alcohol Dependence. The authors of the study suspect that many users may be self-medicating with the illegal substance to find relief from depression, anxiety and general stress over the state of the world.

“LSD is used primarily to escape. And given that the world’s on fire, people might be using it as a therapeutic mechanism,” says Andrew Yockey, a doctoral candidate in health education at the University of Cincinnati and lead author of the paper. “Now that COVID’s hit, I’d guess that use has probably tripled.”

To arrive at their findings, Yockey and his colleagues turned to data collected from more than 168,000 American adults by the National Survey on Drug Use and Health, an annual, nationally representative questionnaire. They analyzed trends since 2015, partly because of the timing of the 2016 presidential election.

The researchers found that past-year LSD use increased by 56 percent over three years. The rise was especially pronounced in certain user groups, including people with college degrees (who saw a 70 percent increase) and people aged 26 to 34 (59 percent), 35 to 49 (223 percent) and 50 or older (45 percent). Younger people aged 18 to 25, on the other hand, decreased their use by 24 percent.

A 1960s-level drug-fueled counterculture revolution probably will not be sweeping the nation anytime soon; the number of Americans using LSD in a given year still remains less than 1 percent of the total adult population. “LSD is a lot less popular today than it was in the late 1960s and 1970s,” says Joseph Palamar, a drug researcher at NYU Langone Health, who was not involved in the new study. In the late 1970s, for example, Palamar says, 10 percent of high school seniors reported ever using LSD, compared with 6 percent today.

Palamar says the drop in use over that longer period was not necessarily driven by declining interest in psychedelics. Rather it likely occurred because there are newer drugs available, such as the psychedelic 2C-B, that have displaced LSD. “However, LSD is perhaps the most popular psychedelic of all time, and it’s never going away,” he adds.

Similar to psilocybin (the active compound in magic mushrooms), recreational LSD users may turn to the drug not only to escape but also “to understand the full capacity of their minds and to improve their well-being,” says David Nutt, a neuropsychopharmacologist at Imperial College London, who was not involved in the new study. LSD is often easier to acquire than psilocybin, though—and it is also easier to carry around than a bag of dried mushrooms, he notes.

The National Survey on Drug Use and Health does not ask users why they took LSD or how large of a dose they consumed. Nutt suspects that the rising popularity of microdosing could explain the overall increase in LSD use. Microdosing involves taking amounts ranging from less than one tenth to half of a “trip” dose of a psychedelic drug—usually in an attempt to sharpen the mind, increase creativity or reduce symptoms of depression and anxiety.

Palamar, on the other hand, hypothesizes that an uptick in LSD use is more likely related to growing participation in the dance festival scene. In a study published in April, he and his co-author found that past-year LSD used increased from 10 to 17 percent among attendees of electronic dance music parties in New York City between 2016 and 2019.

Yockey points out that the increase in LSD use does not have to be attributed to either microdosing or partying alone; both could be playing a role. Maybe “people are going to a Phish concert” and taking a full dose of LSD, “or they’re going to work” and microdosing, he says. And some may also be encouraged to use the drug after reading about studies exploring the therapeutic use of psychedelic substances. Most of this research centers around shorter-acting psilocybin, which is in current or planned clinical trials for treating depression, anxiety, anorexia, obsessive-compulsive disorder, certain severe headaches, and addiction to smoking, cocaine and alcohol. Studies involving LSD are more limited, not because the substance lacks potential as a therapeutic agent, Nutt says, but because research on it is “virtually impossible” in most countries. And in turn, the drug appears to carry more stigma as a result of having less research associated with its therapeutic use.

The U.S. Drug Enforcement Administration classifies LSD as a Schedule I drug, or one defined as having a serious risk of abuse and no accepted medical value. Significant research shows that the substance is not physically addictive, however, and that LSD overdoses are generally not considered life-threatening and subside within 72 hours. In some cases, people who accidentally overdose on the drug have even reported long-term improvements, according to a study published in the Journal of Studies on Alcohol and Drugs. In 2015, for example, a 49-year old woman reportedly took 550 times the normal recreational dose of LSD because she mistook it for a line of cocaine. According to CNN, after being incapacitated for about a day, the woman said that chronic pain she had suffered in her feet and ankles, caused by Lyme disease, had significantly improved. “It just shows that LSD is not that harmful drug that everyone makes it out to be,” Yockey says. Of course, there are well-publicized exceptions: for example, the drug can worsen symptoms of schizophrenia and other psychotic disorders.

Of the handful of studies that have been conducted on LSD’s effects and therapeutic potential, many findings are encouraging. A 2014 paper concluded that LSD administered in a medical setting is safe and can bring lasting benefits. Meanwhile a 2015 study observed that the drug enhanced the emotion evoked from listening to music—an effect the authors believed could be useful for psychedelic-assisted therapy. And a 2017 paper found that LSD, when taken in a controlled setting, increased sociability, trust and feelings of openness. The authors also reported that it reduced anxiety for two months in patients with life-threatening diseases and did not cause complications in a medical context. Similar to psilocybin, other evidence indicates that LSD could be used to alleviate depression and anxiety, treat alcohol dependence and reduce symptoms of autism.

“LSD might be a panacea to anxiety and other psychological disorders,” Yockey says. “But as a Schedule I drug, there’s just so much red tape behind that that some researchers I’ve talked to who want to do LSD research say it’s not even worth it.”

Yockey calls for a depoliticizing of LSD, which would make studies of its therapeutic potential and its effects on recreational users possible. At the same time, he says, efforts to reduce drug use should focus on more harmful substances such as methamphetamine, cocaine and fentanyl—all of which also seem to be on the rise. “These drugs can kill you, LSD cannot,” Yockey says. “We need to rectify our messaging.”