by (The Rosalind Franklin Institute): Antibodies derived from llamas have been shown to neutralize the SARS-CoV-2 virus in lab tests, UK researchers announced today… 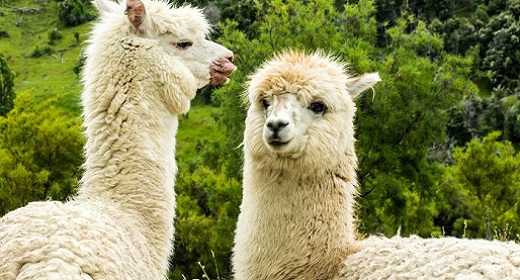 The team involves researchers from the Rosalind Franklin Institute, Oxford University, Diamond Light Source and Public Health England. They hope the antibodies – known as nanobodies due to their small size – could eventually be developed as a treatment for patients with severe COVID-19. The peer-reviewed findings are published in Nature Structural & Molecular Biology.

Llamas, camels and alpacas naturally produce quantities of small antibodies with a simpler structure, that can be turned into nanobodies. The team engineered their new nanobodies using a collection of antibodies taken from llama blood cells. They have shown that the nanobodies bind tightly to the spike protein of the SARS-CoV-2 virus, blocking it from entering human cells and stopping infection.

Using advanced imaging with X-rays and electrons at Diamond Light Source and Oxford University, the team also identified that the nanobodies bind to the spike protein in a new and different way to other antibodies already discovered. There is currently no cure or vaccine for COVID-19. However, transfusion of critically ill patients with serum from convalesced individuals, which contain human antibodies against the virus, has been shown to greatly improve clinical outcome. This process, known as passive immunization, has been used for over 100 years, but it is not straightforward to identify the right individuals with the right antibodies and to give such a blood product safely. A lab-based product that can be made on demand would have considerable advantages and could be used earlier in the disease where it is likely to be more effective.