How Lotus Pose Makes You Calmer

by Mireya Semelas: Padmasana is derived from the Sanskrit words “Padma” (‘lotus’) and “asana”(posture or pose), hence being commonly referred to as ‘Lotus Pose’… 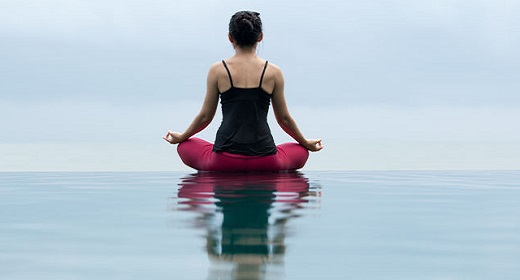 The practitioner resembles the greatness of the petals of a lotus flower sitting in a cross-legged position, with an erect spine and with each hand over the corresponding knee with the palms facing down or in a mudra (often Chin or Jnana mudra).

Lotus pose may seem simple at first, but it is in fact an advanced posture. It is specially challenging for cultures where sitting is done on chairs (instead of on the floor) and for hours long during the day. The asana requires great flexibility in the legs and joints (ankles, knees and hips) which have been lost in the Western culture.

Ancient yogis are mainly represented seated in Padmasana in drawings and sculptures as it is considered to be one of the best poses for meditation. Its energetic benefits are  highlighted in some traditional Hindu texts, claiming that it awakens Kundalini. According to the Hatha Yoga Pradipika, written in the 15th century, the way in which the body is positioned in Padmasana, it is rooted to the earth, pressing into the acupuncture points that bring changes to the metabolic structure and affect the brain patterns. The lower part of the body is stable and the spine is held vertically erect, allowing the body to be held strong and steady for long durations of time.  In Padmasana the body has gravity working on its favour helping muscle tension dissolve, calming the nervous system down and lowering the blood pressure when practiced regularly. It allows to ground yourself.

As the body calms down, so does the mind, closing it to distractions and opening it for meditation. The body is safely rooted, allowing the mind to be enlightened; just like the lotus flower stems from the mud and blossoms into a beautiful flower.

How to get into Lotus Pose