How The Beat Generation Became “Beatniks”

by Matthew Wills: The rebellious culture of the Beat Generation was coopted into fodder for a marketable lifestyle… 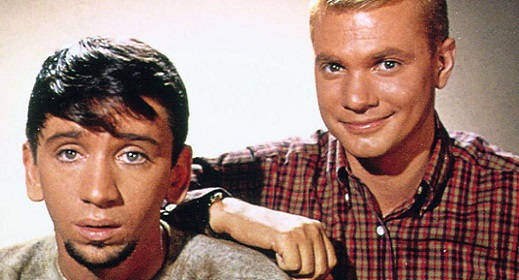 What happened when the Beat Generation bumped up against the popular culture they were rebelling against? Historian Stephen Petrus writes about how the youth subculture was turned into a commodity.

“From the end of 1958 through 1960, popular magazines, newspapers, television shows, and even comic strips bombarded Americans with images of the Beat Generation,” writes Petrus. But these images weren’t so much of writers like Allen Ginsberg, William S. Burroughs, Jack Kerouac, and Gregory Corso, the Beat Generation’s leading lights. These images were of the beatniks, the bohemian lifestyle highlighted by “Howl” and On the Road.

To contemporary scholars the term “Beat Generation” refers to a group of post-World War II novelists and poets disenchanted with what they viewed to be an excessively repressive, materialistic, and conformist society, who sought spiritual regeneration through sensual experiences. This band of writers includes Allen Ginsberg, Jack Kerouac, and William Burroughs, who originally met in 1944 in New York City to form the core of this literary movement.

“Beatnik,” on the other hand, was a term coined by San Francisco Chronicle columnist Herb Caen in April 1958. It was a play on “Sputnik,” Earth’s first artificial satellite which had gone up in October 1957. Caen used the term to refer to “over 250 bearded cats and kits” “slopping up” free booze at a party sponsored by Look magazine. Like the more popular Life magazine, Look was obsessed with photographic spreads of beatniks. (Playboy had a different kind of beatnik photograph spread in its July 1959 issue.)

The years between 1957 and 1960 marked the “the acceptance of the beatnik dissent and the emergence of a fad: a cultural protest transformed into a commodity,” writes Petrus. There was fashion: loose sweaters, leotards, tight black pants, berets, and sunglasses were all the rage. There were spaces: coffee houses, cellar nightclubs, and espresso shops opened to meet the new demand. New York City even had a “Rent-A-Beatnik” service, where you could order up a poetry-reading/music-playing cool cat or cool chick for your event; sandals and bongos were available options.

The popular cultural responses to the beatniks ran from denunciation to tolerance to imitation. The 1960 Republican Convention featured J. Edgar Hoover proclaiming that “Communists, Eggheads, and Beatniks” were the country’s great enemies. Some Americans associated beatniks with drugs, delinquency, and un-Americanism.

Then again, as Petrus writes, “the original beatniks themselves became a tourist attraction” in San Francisco’s North Beach. There was even an American Beat Party, which nominated a Presidential candidate in 1960. Words like “cool,” “crazy,” “dig,” and “like,” entered the general American lexicon.

In the media, beatniks were mostly portrayed as “innocuous and silly figures, causing Americans to laugh at them and embrace them.” TV’s favorite beatnik was Maynard G. Krebs, a goofy, harmless man-child who shivered at the thought of work and began many a sentence with “like.” Wearing a chin beard and playing the bongo drums, the stereotype ultimately edged out the title character of The Many Loves of Dobie Gillis (1959-1963) in popularity.

But, as Petrus writes, the original Beats were more serious than that.

Shaped by the effect of the senseless murder of World War II and the knowledge of a possible instant death by an atomic explosion or a slow deterioration by the cancerous force of conformity, the hipster responded to his situation by detaching himself from society and rebelling.

Then again, dissenters have a way of popping up again, elsewhere. The year 1960 was defined by a wave of civil rights sit-ins across the South, the birth of Students for a Democratic Society, and protests against the House Committee on Un-American Activities in Berkeley. What rough beast came slouching towards Berkeley to be born? Like, the Sixties had arrived.