It’s a 2-Acre Farm, Packed Into A Shipping Container That Doubles As A Farm Building

by Derek Markham: The Farm From A Box system is designed to feed 150 people per year, and includes drip irrigation, all of the tools, and its own renewable energy setup… 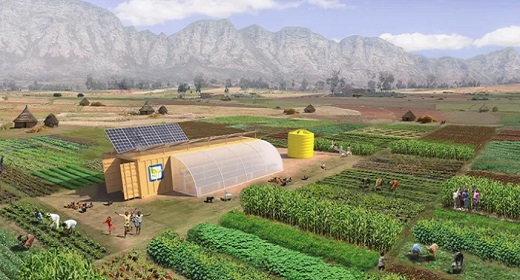 This plug-and-play farming system combines water-smart irrigation, renewable energy, and precision farming technology in a single shipping container that is said to be capable of supporting the cultivation of almost two and a half acres, using regenerative agriculture practices.

We’ve covered a few different approaches to the “farm in a box” concept, but all of them so far have been built around the idea of growing the crops inside a shipping container, using hydroponics or aeroponics and artificial lighting. The Farm From A Box is quite a bit different in that the farming takes place outside of the box (or shipping container) and after the contents have been unpacked and deployed, the box itself becomes the hub of the farm infrastructure.

According to the company, this is a “turnkey farm kit” that can be used to build a stronger local food system, especially in food deserts and in the developing world, where infrastructure can be spotty and unreliable at best, and possibly even non-existent. The system is described as being “food sovereignty in a box” that can be a “Swiss Army Knife” for off-grid farming, and while there is a basic template, each unit can be customized to fit the particular situation.

While the units are designed to be complete systems with all of the core components (minus the land and water rights and labor, of course), the company doesn’t just stop there, but also includes a training system to help “new farmers tackle the steep learning curve of permaculture technique.” To me, this is one of the critical parts of the venture, because if you’ve ever tried to grow food on a larger scale than your own backyard, without having any formal training or guidelines to follow, it can be a humbling experience that is full of failures learning opportunities.

“Based on extensive field research, we found that rural communities often lack the resources and infrastructure needed to access nutritious food. We developed a toolkit that contains all of the core components needed to grow your own food, on a two acre plot of land, without the need for an existing grid. Imagine the good it can do by growing local, organic food for a school, or helping jumpstart food production after a disaster. ‘Farm from a Box’ enables and empowers communities to provide for themselves.” – DeCarli

Currently, Farm In A Box has a prototype unit operating in Sonoma, California, and a second version is in the works for deployment in the Rift Valley of Ethiopia. Basic units will cost about $50,000, which includes a 3 kW solar PV array, a battery storage system, a drip irrigation system and water pump (which can be fit to a well or to a municipal water supply), basic farm tools, a sensor package, a seedling house, and a WiFi connectivity package, all packaged into single shipping container. Other options are available as well, including a water filtration system, an advanced sensor suite, remote monitoring capabilities, and more.