by Kate Cox: Not even the authors expect it to become law right now—but they hope for next year… 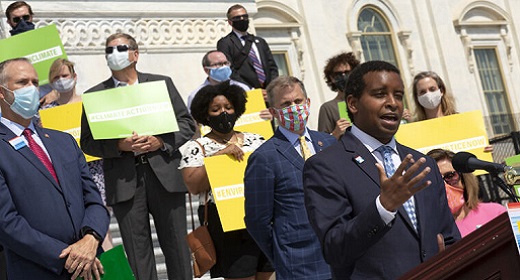 A House committee tasked with managing the global climate crisis this week unveiled an ambitious, detailed policy-package proposal. It brings the United States to net-zero emissions, protects vulnerable communities, and helps limit global warming to an increase of 1.5 degrees.

The full report (large PDF) from the House Select Committee on the Climate Crisis clocks in around 550 pages and contains suggestions for just about every sector you can think of. Not only does report provide specific policy recommendations and spell what should happen—it also suggests Congressional committees and Cabinet departments to oversee the creation and enforcement of each element.

Broadly speaking, the goals of the plan are to bring the United States to net-zero emissions no later than 2050 and then follow through to negative emissions in the back half of the 21st century. That goal would be achieved by adopting new regulations and incentives in energy, transportation, housing, construction, manufacturing, agriculture, telecommunications, and infrastructure for a start and then building on those accomplishments from there. The report is broad and dense, but here are a few of the highlights.

Unsurprisingly, the report calls for the rapid expansion of cleaner renewable and sustainable energy sources and reducing dependence on fossil fuel extraction. That comes in two main parts: increasing support, subsidies, and incentives to expand clean energy on the one hand, and reducing support, subsidies, and incentives to extractive industries.

Institutional support for clean energy should come from the Department of Energy, the report finds—and right now, that support is meager. Therefore, the authors conclude, Congress should update the authorization language and mandate of the Department of Energy in order to make “decarbonization of the energy sector and climate change mitigation” core considerations of the agency. The DOE also needs to be completely reorganized, the report finds, in order to reduce the current siloed approach to individual fuels and technologies as well as promote research and development overall “by end-use sector rather than [by] fuel.”

A reorganized DOE would then be able to enact regulation limiting pollution and leaks from oil and gas production and pipelines, especially methane, which is an extraordinarily potent greenhouse gas. That could be achieved in part simply by reinstating the 2016 methane emissions limits, the report finds, which the Environmental Protection Agency rescinded in 2018 under a directive from the White House.

Additionally, the report calls for a sweeping overhaul to existing taxation structures. “In an ideal world, energy-related tax incentives would be technology neutral and based on performance to allow the broadest scope for innovation,” the report reads, exhorting Congress and tax experts to seek “the best mix of tax incentives and other policy instruments to maximize development and deployment of technologies the country needs to meet its zero emissions goal.”

The flip side of that is a recommendation that the federal government stop actively supporting the oil and gas industries by significantly curtailing the existing tax breaks extraction businesses can access. The report specifically cites the way oil and gas companies can deduct “intangible drilling costs” as one potential target, which could generate $13 billion in revenue over a decade. Another deduction Congress should eliminate is one that allows independent oil and gas producers to deduct 15 percent of their gross income from a well’s annual production—a deduction that can “exceed capital costs,” the report notes. Altering that provision in the law would generate $12 billion over the next decade, the authors estimate.

The committee calls not only for increased production of electric vehicles, such as the ones currently on the roads in the United States. It also calls for steep increases into research and development of new clean vehicle technologies—as well as a significant increase in US-based manufacturing for those vehicles.

Passenger vehicles accounted for more than half of all the US carbon emissions from transportation in 2019, the report finds. This figure is predicted to fall by 22 percent by 2050 even without any federal intervention. The feds can make it fall further and faster by adopting new policies, though. These policies would start with “ambitious greenhouse gas emission standards” for cars and trucks. The report references the 2012 clean air standards put in place by the Obama administration, which the Trump administration jettisoned in 2018. But the report concludes that the Obama-era rule was not stringent enough and, instead, recommends the whole country adopt California’s stricter standard.

In addition to requiring stricter fuel efficiency from vehicles using internal combustion engines, the report calls for Congress to establish a technology-neutral standard requiring all new light-duty vehicles sold to be zero-emissions vehicles by 2035—only 15 years from now. Congress should also extend and expand tax credits for consumers who buy electric cars, which would make newer technology “more accessible to middle-class households,” it recommends.

The obstacles are legion, the report notes: the sheer number of passenger vehicles on the road makes rapid turnover a challenge, and the technology isn’t necessarily there yet for heavy-duty freight trucks or shipping and aviation to turn over their fleets immediately.

Therefore, the report finds, Congress should take a “multi-pronged approach to the transportation sector to drive down emissions and increase the sector’s resilience in the face of worsening climate impacts.” In other words: if you can’t change the cars right now, work on changing the systems. Areas that can support it should invest in a “massive expansion of public transit,” the report concludes, and the federal government should “support states and localities in their efforts to adopt transit-oriented, smart growth strategies and make housing, businesses, and critical services more accessible.”

Very few of our political and social challenges fall equally on all people, and the climate crisis is no different. “Communities of color, low-income communities, and tribal and Indigenous communities” bear a disproportionate amount of the burden from pollution and climate change, the report observes, and the authors weave the idea of environmental justice and helping all Americans deeply into every section of the report.

Low-income communities and communities of color are especially affected by housing policy and support, the report notes. One in three US households have experienced “energy insecurity,” i.e., being unable to pay their electric, oil, or gas bills and having to keep their homes excessively warm in summer or dangerously cold in winter. Renters also do not have the ability to weatherize their homes or make them more efficient, and landlords do not currently have an incentive to spend on such upgrades because utility bills are generally a tenant’s responsibility.

To that end, Congress should funding for and access to a federal weatherization fund that would assist low- and moderate-income Americans increase the energy efficiency of their homes, the report suggests. The report also holds several recommendations for improving both the energy efficiency and quality of life in the nation’s 1 million public-housing units.

“Residents of environmental justice communities experience adverse indoor conditions, including exposure to pollution from appliances and poor ventilation,” which pose serious health risks and contribute to chronic health conditions, the report concludes. The report calls on Congress to expand investments that go to retrofitting and “decarbonizing” all public housing nationwide.

Congress should also “encourage” public-housing authorities in the states to contract with solar energy companies and increase deployment of solar power for low-income families, the report says—with the provision that the Department of Housing and Urban Development should also issue rules “to ensure reduced energy bills from solar improvements do not lead to rent increases for tenants.”

Many areas of the US also face an affordable-housing crisis, the report adds, which forces people who can’t afford sky-high rents out of urban centers and into suburban areas where public transit is not an option. In order to alleviate that crisis and permit for density, the report suggests expanding a low-income housing tax credit to encourage denser building in city centers and increase the supply of housing to help meet demand.

The report also specifically calls out broadband access and wireless networks’ reliability as key factors in making the US infrastructure more just in the face of climate change. Reducing or eliminating the digital divide, and expanding and strengthening both fixed and wireless broadband networks, can “support public safety and community resilience,” the report finds.

Mobile towers and 911 systems are particularly vulnerable to disruption from disasters exacerbated by climate change such as hurricanes and wildfires, the report notes. This leads to disaster responses being uneven. Congress should increase funding to the Federal Communications Commission to expand support for both rural and urban broadband infrastructure, the report concludes, and it should especially direct the FCC to “prioritize broadband improvements for economically disadvantaged and underserved communities that are experiencing or are likely to experience disproportionate environmental and climate change impacts.”

The gridlock politics of 2020 being what they are, there is effectively zero chance of any legislation in support of these policies becoming law this year. Even if Congress were not hyperpartisan, there’s frankly not enough time left—it’s already July, and the House is out of session for all of August, all of October, and the first half of November. After November, this being an election year, Congress will attend to very little lame-duck business before the new session starts in January 2021.

Rep. Kathy Castor (D-Fla.), chair of the Climate Crisis Committee, admitted candidly that there’s a long road ahead for meaningful change, particularly in the immediate future. “We’re going to press ahead with everything we can do in the near term,” Castor said. But more importantly, “it will provide a plan that can be taken off the shelf and adopted into law as soon as we are able to reconvene.”

Getting Congress to agree on any part of the plan—let alone all the dozen proposed pillars and all their moving parts—will be a challenge. But it’s not necessarily impossible. Results of a survey released last week by the Pew Research Center find broad, bipartisan support from the public for increased federal activity around the climate crisis. Nearly two-thirds (65 percent) of respondents said the federal government is doing too little to reduce effects of climate change. Proposals to increase corporate taxes based on carbon emissions, increase auto-fuel efficiency, and prioritize “developing alternative energy sources” all were met with approval by more than 70 percent of respondents. Meanwhile, more than 80 percent of respondents supported restricting power-plant carbon emissions and providing a carbon-capture tax credit.

There is also growing support for some kind of climate legislation among several conservative Congressional Republicans in both the House and Senate, including House Minority Leader Kevin McCarthy (R-Calif.), which could mean some kind of common ground exists for lawmakers to build bills upon.