by Charlotte Jee: The news. A study of more than 17 million people in England has confirmed the various factors that are linked with an increase in a person’s risk of dying from covid-19… 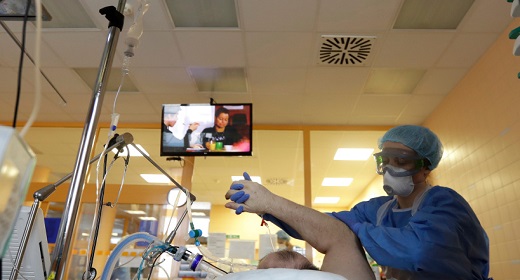 age; being male, Black, or from an ethnic minority background; or having underlying health conditions. It confirms a lot of previous research, but it’s by far the largest study yet. It was published in Nature yesterday.

The research: The researchers used pseudonymized health records from about 40% of England’s population—17,278,392 adults—of whom 10,926 were recorded as dying from covid-19 or related complications. They plugged this data into a health analytics platform they’d built, called OpenSAFELY. The team has said it will keep adding to the platform as more patients’ records become available.

What they found: As we knew, age is the single biggest indicator of whether someone is likely to die from the coronavirus, and the risk increases sharply among those over 80. People older than 80 were hundreds of times more likely to die than people under 40, and more than 90% of deaths in England were in people over 60. Men were more likely to die than women of the same age: they accounted for 60% of all deaths. People with underlying medical conditions like obesity, diabetes, severe asthma, and cardiovascular disease were at higher risk, as were people with lower incomes.

Ethnic disparities: The study confirmed that Black and South Asian people, as well as those from other ethnic minority groups, were more likely to die than white patients. The researchers could not establish why there is such a big ethnic disparity, saying that “only a small part of the excess risk is explained by higher prevalence of medical problems such as cardiovascular disease or diabetes among BME people, or higher deprivation.” In the US, Black and Latino people are almost twice as likely to die as white people, according to data obtained by suing the Centers for Disease Control and Prevention.