What Primates Can Teach Us About Managing Arguments During Lockdown

by Nicola F. Koyama: The world may be reopening in some places, with people looking forward to pubs, restaurants and haircuts… 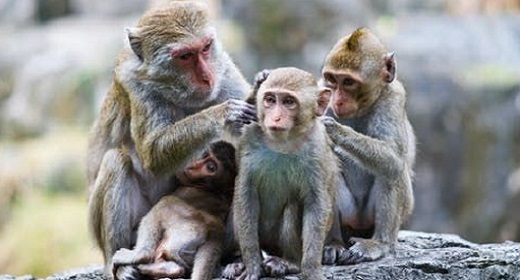 Many of us will no doubt also be looking forward to some time away from home – alone – once more.

Spending such prolonged time in close quarters with others puts strain on relationships and increases social tension. Tempers can flare and arguments erupt. But we can increase our understanding about how to cope in these situations by looking at how our closest relatives – non-human primates – manage social relationships during similar periods.

For many different animals, forming friendly relationships that endure can influence health, survival and reproduction. Though of course, living in a group where individual needs differ inevitably brings group mates into conflict. But behavioral strategies have evolved that can minimize the risk and costs of conflict.

But our research has found that when space is at a premium and conditions become a little crowded, primates engage in a variety of pre-conflict strategies.

A temporary reduction in living space, can cause a surge in social tension for primates – and behavioural indicators of anxiety such as scratching increase. But primates also use several coping strategies during such times to prevent or reduce conflict.

One such approach is a conflict avoidance strategy – whereby individual primates lessen how much they actively seek interactions with others. They reduce friendly behaviour and aggressive escalation, even though mild threats still occur.

Another option is a tension reduction strategy. This sees individual primates increase friendly behaviours such as grooming and appeasement. This alleviates tension by increasing tolerance, and minimising the likelihood of conflict occurring or escalating.

Different species and even different groups of the same species adopt these strategies during short-term space restriction. Some rhesus monkeys, for example, display a conflict avoidance strategy to reduce the likelihood of intense fights.

Other monkeys increase friendly behaviour, consistent with a tension reduction strategy. And brown capuchin monkeys and some chimpanzees adopt an inhibition strategy.

Put to the test

Our study of a zoo chimpanzee group, took place during a month of space restriction when the group was confined indoors for health reasons.

We found that during this time of restriction, aggression rates decreased. But this was only between individuals with a history of more frequent aggression. Individual chimps were also less likely to join in conflicts. Though the amount of friendly and appeasement behaviour didn’t change – suggesting chimpanzees were using a type of selective inhibition.

We also found that female chimpanzees had a less cohesive grooming network and fewer grooming partners during space restriction. By grooming fewer partners, females adopted an avoidance strategy and focused on their strongest friendships. On the other hand, the most aggressive individuals reduced how often they attacked others – and so adopted a selective inhibition strategy.

These pre-conflict strategies are not only geared toward preventing or deescalating conflict. Primates can also minimise the costs of future aggression by strengthening bonds with allies.

We found, for example, that on the day before a conflict, chimpanzees who groom a friend are more likely to receive support from them in a following conflict. By maintaining good friendships, chimpanzees can further reduce the costs of future aggression by ensuring help is there when needed.

Conflict management strategies are widespread across primate species and are part of our evolutionary history. As social, cooperative beings, we have evolved coping strategies to use in such situations and there are many practical resources out there to remind us how to deal with a conflict before it happens.

Though lockdown may be lifting – and fewer people will be spending all their time in the house, there are those who will likely remain at home for some time to come due to underlying health conditions. These are unusual times but our primate heritage equips us to deal with unpredictable social situations and the challenges imposed by enforced close proximity.