What Sleep Habits Look Like In 20 Countries Around The World

by Tara Golshan: On average, Americans don’t sleep as much as the Dutch… 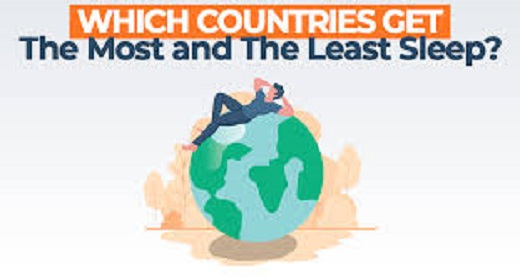 A new study from researchers at the University of Michigan published in the journal Science Advances has captured the “normal” sleeping habits of people around the world, using data from a smartphone app.

Of the 20 countries with the highest number of respondents, people in the Netherlands on average reported sleeping nearly an hour more than those reporting from Singapore and Japan. Americans were among the earliest morning risers alongside Australians, while those in Australia tended to go to bed earlier.

How late people went to sleep showed to be a stronger indicator of how much time people slept overall rather than what time they woke up: The later people go to bed, the less sleep they get on average.

Now the researchers are determined to figure out why this is, Daniel Forger, the study’s co-author, said.

It’s still unclear if the differences in sleep times have a stronger correlation with culture influences, like what activities or societal pressures lead people to sleep later or wake up earlier, or with differences in light exposure. But it is clear that sunrise and sunset affect when people wake up.

According to the study, later sunsets seemed to correlate with longer sleep durations.

“We’re not saying that the molecular clock doesn’t affect bedtime or that societal pressures don’t affect wake time,” Forger said. “I think some people assume that it’s just by an alarm clock, we have blackout shades, but we actually do see that people are really changing their bedtime.”

The data was self-reported through Entrain, a smartphone app originally developed to help with jet lag, which allows people to self-report their sleeping habits as well as tracks outside light patterns. Comparing their data with that from other similar studies on sleep times, Forger said the team hopes to further push its technology to a wearable data tracker – like a wristband – that could potentially more accurately collect data on when people are sleeping and waking up.