by Sasha Belenky: New coronavirus cases hit record highs across the continent, providing the starkest warning since lockdown that the pandemic isn’t over… 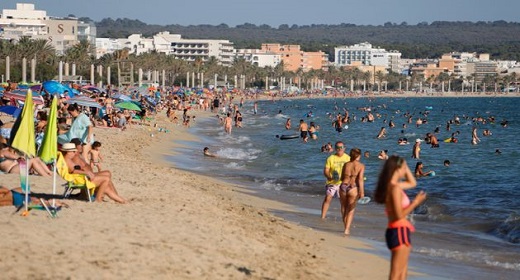 Europeans have been taking advantage of the last remaining vestiges of summer — going to beaches, bars, restaurants and nightclubs. Buoyed by declining coronavirus infection rates, government officials across the continent have lifted restrictions on the travel and hospitality industries over the past several months, encouraging people to eat, drink, shop and go on holiday.

In France, 4,771 new cases were recorded on Thursday — a thousand more than the previous day, and the first time since May that the country has recorded more than 4,000 daily cases.

Germany reported 1,707 new cases on Thursday, its highest increase since April, and Spain reported 3,349 new cases. In the United Kingdom, scientists advising the government revealed on Friday that the coronavirus infection rate has risen, fueling concerns that the epidemic is growing in the country.

“Make no mistake: Things are not going well,” Fernando Simón, director of the Center for Health Alerts and Emergencies at the Spain’s Ministry of Health, said on Thursday, per HuffPost Spain.

Much of the blame has been placed on people attending parties and taking vacations — exactly the types of activities that, not too long ago, government officials were not only permitting but actively encouraging in order to get their national economies moving again post-lockdown.

“We faced a lot of pressure from the tourist industry because it’s one of the main economic sectors of Spain,” Jacobo Mendioroz, the director of the committee responding to the coronavirus in the Catalonia region, told Time. “We may have rushed into opening all the big stores, just to have tourists coming into our country.”

In the United Kingdom, the government has spent millions of pounds this month to subsidize meals in restaurants, in an effort to get the public to dine out again and support the ailing hospitality industry.

“The epidemic is changing. People in their 20s, 30s and 40s are increasingly driving its spread,” Takeshi Kasai, regional director of the World Health Organization, said this week.

In Spain, the average age of those infected by COVID-19 had fallen from between 62 and 63 years old during the peak of the pandemic to between 37 and 39 years old today, Simón said. The country is also detecting more cases among people who are asymptomatic, he added.

Bars and nightclubs across Spain have been ordered to close, in an effort to bring the infection rate back under control.

On Thursday, the U.K. government said travelers returning from Austria, Croatia and Trinidad and Tobago will have to quarantine for 14 days, after the countries were dropped from the U.K.’s list of safe travel corridors. The announcement followed a sharp rise in cases of COVID-19 and after the Joint Biosecurity Center flagged that some U.K. infections may have come from Croatia.

The United Kingdom removed Spain from its list of “safe” countries in July as the number of coronavirus cases there began to rise sharply.

Simón on Thursday issued a plea to young people who might believe that the risk of catching the coronavirus is small, and he called on social media influencers to relay the warning to their followers.

“It is not enough for us to say, ‘I am young and I am not going to suffer, nothing happens,’ because we know that each young person can then infect members of their family and end up infecting elderly or vulnerable people,” Simón said.

WHO officials have been driving home that message this week as well.

Hans Kluge, the organization’s regional director for Europe, said on Thursday that he was “very concerned” about the increasing number of cases among young people.

“Low risk does not mean no risk — no one is invincible,” he said.

At a news conference on Tuesday, WHO epidemiologist Maria Van Kerkhove said young people should not be made into a scapegoat for the increase in infections.

“We shouldn’t be blaming people or putting people at fault for wanting to live their lives,” she said. “We all want to be living our lives. We all want to get back to what ‘normal’ used to be.”

Like Kluge, however, she also stressed that the effects of the virus on young people can be severe, and warned people to take the risks seriously.

“We are seeing young people who are dying from this virus,” she said. “If it’s possible to avoid these crowded places, please do so.”

In many ways, Europe is better prepared to deal with rising COVID-19 cases now compared to the early days of the pandemic. Scientists understand far more about the coronavirus than they initially did when it first broke out, and medical personnel are more familiar with how to treat patients. Public officials hope that swift, targeted actions such as local lockdowns and temporary closures will be enough to keep infection rates down and avoid the need for more sweeping restrictions.

Still, in July, as officials began lifting lockdown restrictions and people flocked to vacation destinations, the European Commission warned that countries needed to do more to increase stockpiles of medical gear and build up their testing and tracing systems in preparation for a second wave. Summer, the commission said, was a time for preparation, not relaxation.

“We do not have the right to say, ‘This is too much, I’m too tired, this is enough,’” Health Commissioner Stella Kyriakides said, per Politico. “This would mean giving up all the sacrifices that have been made.”

Now, it’s possible that the rush to enjoy the remaining weeks of summer may backfire once the season changes.

“Going into winter with hundreds of cases per day means risking a steep rise once temperatures cool, schools reopen and people head back indoors. It means risking a second round of national lockdowns, which would be catastrophic for mental health and for economies,” Devi Sridhar, a professor and chair of global public health at the University of Edinburgh, wrote in The New York Times.

Simply put: The pandemic isn’t over. In Europe, nearly 2 million coronavirus cases have been confirmed, according to the European Centre for Disease Prevention and Control. More than 180,000 people have died.

In the United States, the number of cases surged past 5 million this month, the most in the world, and more than 170,000 people have died.

Will a second wave be even deadlier than the first, as some scientists have predicted? Over the past six months, Europe has gone from being the epicenter of the pandemic to a model for how to reopen after national lockdowns. Now, it faces yet another turning point. With coronavirus cases spiking, the measures that countries take now could provide important lessons for how to strike a balance between keeping people safe and keeping society going. Or it may once again prove to be a terrible harbinger of the devastation to come.