By Gloria Karpinski:  Mother Meera:  Sometimes we are afraid of the force of her moist, dark, vital sexuality, for she is that as well. 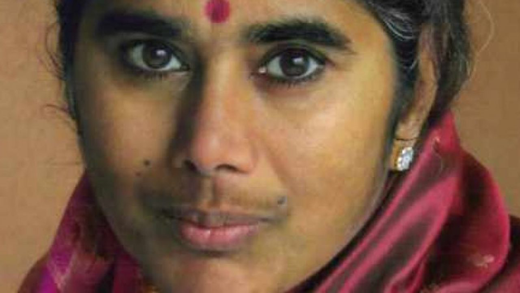 She brings all life into form. In that reproductive form, she has been persecuted, even made responsible for all the ills on our planet…symbolized in Eve and Pandora, to mention only two. She is nature. And we’re ambivalent about that.

Because we don’t regard nature with total respect, we seek to conquer her. There is a high correlation between the denial of the Divine Feminine, the raping of women psychologically, socially, politically, and physically, and the raping of the land. When we perceived ourselves as dependent on the good Earth, we honored the Mother of nature and worshipped Her. We dismissed Her when we had the arrogance to think we could conquer nature.

Our Mother teaches us wisdom, not just knowledge. She teaches us of the unbroken connectedness of all life, its wholeness and its holiness, and she insists that we honor that life wherever it is found – in her green growing children, the four-legged ones, the winged ones, the two-legged ones of every race, and in both genders.

We need her inner guidance opening our intuition and hearts, stretching our understanding into inclusiveness, moving us from the specific to the universal and insisting that we examine consequences of our so-called progress. Without that guiding wisdom, we can be like a breed of intellectually precocious but underdeveloped children out of control, building more and more efficient ways to annihilate each other and wreck havoc with the intricately interwoven patterns of nature, patterns that took eons to build.

So, even in the midst of our pain, our healing begins. As I write this, I think of the women I have seen that carry even unto today the rage and terror of the burning times, the holocaust of the middle ages when religion sanctioned the systematic torture and death of millions of women. And I have heard the legacy of these times echoing down through three more centuries, depositing traces of its paralyzing fears in our collective unconscious. And I think the Goddess for the healing in progress.

We are hot on the trail of recovering awareness of our Mother, exploring terrain rarely charted in the Western psyche – risky, dangerous, even forbidden territory. There are a lot of excellent guides to take us beyond the boundaries set by patriarchy – teachers, books, CDs, ritual, workshops, all kinds of gatherings that celebrate feminine knowing, knowledge of the goddess traditions and resurrection truths that challenge crippling theologies that have been suspicious of nature, often choking off life itself, and certainly denying 50 percent of the Divine.

You do not have to go to Germany or anywhere to know the Mother through Mother Meera, much as it is thrilling to do so. She lives in you. So all you really have to do is ask –not beg – just ask prayerfully, expectantly, as a trusting child asks of a benevolent parent. While she may strip away your illusions, it is only to make it possible for you to see and then be your truth. And She will provide the inner strength and support you need to grow into your truth.