by Elizabeth Ingram: The national average price of wind power purchase agreements dropped to below 2 cents/kWh in 2018, according to the annual Wind Technologies Market Report released by the U.S. Department of Energy… 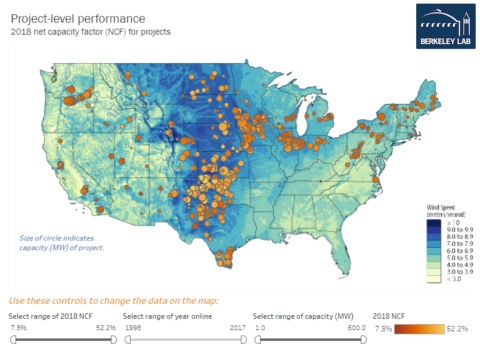 DOE says wind energy prices topped out at 7 cents/kWh for PPAs executed in 2009 and that the new low nationwide average “is dominated by projects that hail from the lowest-priced interior region of the country.” The report says these prices are possible in part due to federal tax support and that they compare favorably to the projected future fuel costs of gas-fired generation. In addition, solar PPA prices have declined precipitously, pressuring wind’s competitive position.

DOE says $11 billion was invested in new wind power plants in 2018, and wind energy contributed 6.5% of the U.S. electricity supply in 2018. It provided more than 30% in three states: Kansas, Iowa and Oklahoma.