by Ocean Robbins: Each country has its own standards for what ingredients and food production practices it considers safe… 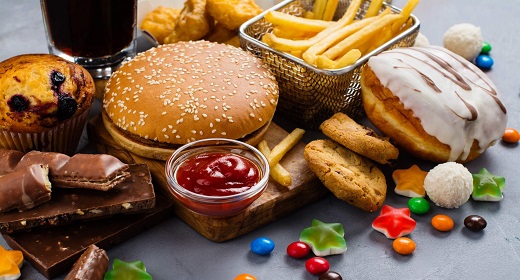 And some of what’s considered normal practice for the food industry in the United States is handled very differently in other countries.

It’s well known that rates of chronic diseases like cancer, heart disease, diabetes, and obesity are high in the U.S. And the country is also saturated with food allergies and behavioral disorders. In many cases, these conditions and diseases are highly preventable. It turns out that there are a number of ingredients and food additives that other countries have banned, but the U.S. still uses. Could it be possible that some of them could be playing a part in the public health crises?

The Problem with FDA Regulation

As much as we would like to believe that everything on store shelves is delicious, good for us, and safe, the truth is not always so reassuring. In fact, the food supply in the U.S. (and many other nations, too) is full of chemical flavorings, additives, colorings, and other ingredients that you may not want to put in your body. Before we start naming names, let’s explore how the U.S. government could let this happen.

For starters, the FDA states that food companies can market new chemicals and food additives WITHOUT FDA oversight or approval, so long as “the substance is generally recognized, among qualified experts, as having been adequately shown to be safe… ”

This is known as the GRAS system, and it might sound all well and good. But what makes someone a “qualified expert”? And how are they able to determine which chemicals food companies can add to the food we feed our children? It turns out that these companies often convene their own “expert” panels to decide whether the ingredient will pose harm. And many of these panels contain scientists with financial ties to all manner of industries – even including the tobacco industry (“experts” who may have, at one time, recommended that cigarettes were safe!). Based on the panel’s recommendations, companies then decide whether or not to share the results of the assessment with the FDA. They don’t even have to do so!

Most of the chemicals on the GRAS list have never had long-term testing on humans, and therefore can’t possibly be guaranteed safe. And some of them don’t stand up to the test of time, either. For example, BHA is “generally recognized as safe” – despite the fact that the National Institutes of Health’s National Toxicology Program concluded that BHA can be “reasonably anticipated to be a human carcinogen.”

And then there are artificial trans fats, which have historically been on the GRAS list and added to foods like frozen pizza, peanut butter, packaged snack foods, vegetable shortenings, and ready-to-use frostings to improve their flavor, texture, and shelf life. Unfortunately, we later learned that trans fats were causing upwards of 500,000 deaths per year from associated heart disease.

In 2015, the FDA finally decided that trans fats, or partially hydrogenated oils, were unsafe, giving food manufacturers a few years to remove them from the food supply. Since the ban took place, many food companies have replaced trans fats with ingredients like palm oil instead, which comes with its own set of concerns.

11 Banned Ingredients That Are STILL Widely Used in the U.S.

Below are some of the most commonly used food ingredients and practices that are allowed in the United States, but banned elsewhere.

Dough conditioners, such as potassium bromate and azodicarbonamide are chemicals used to improve the strength and texture of bread dough. Dough conditioners are often found in white breads, rolls, and “egg breads.” However, they are possible human carcinogens (potassium bromate is classified as a category 2B carcinogen). And exposure to them is known to cause respiratory sensitivity, such as asthma or other breathing difficulty. As such, potassium bromate is banned in China, India, Brazil, the European Union, and Canada. And azodicarbonamide is banned in Australia and Europe.

Brominated vegetable oil (BVO) was originally patented by chemical companies as a flame retardant. But now, BVO can be found in certain colorful sports drinks and citrus-flavored sodas as an emulsifier. Studies have shown that BVO isn’t harmless. It actually accumulates in human tissue, as well as breast milk, and can cause memory loss over time. Bromine toxicity can lead to skin rashes, appetite loss, and heart problems, as well as major organ damage and birth defects. Bromine also competes with iodine for receptor sites in the body, which can increase risk for iodine deficiency, autoimmune disease, and even certain cancers. And although BVO has been banned in countries like Japan, it’s been used in food and beverages in American since 1977 when it was approved by the FDA.

In the United States, propylparaben is used as a preservative in tortillas, muffins, trail mix, pies, sausage rolls, and more. Research has found that it can affect sex hormones and sperm counts in young rats. Cornell University research had also indicated that exposure to parabens may be linked to breast cancer. Environmental Working Group senior scientist Johanna Congleton, Ph.D., tells us, “It is of great concern to us that the use of an endocrine-disrupting chemical in our food is considered safe by our own government… Studies show that chemicals that disrupt hormone signaling can lead to developmental and reproductive problems.” Propylparaben is totally legal in the U.S., but in 2006 the European Food Safety Authority banned the use of propylparaben in food. And in 2015, the EU went further – also banning propylparaben from cosmetic products.

BHA and BHT are popular man-made antioxidants used in dry mixes, cereals, and dehydrated potato products to preserve them and increase shelf life. They’re also found in product packaging. These are possible carcinogens and endocrine disruptors — meaning that they can alter the normal function of your hormones and lead to disease. BHA and BHT are banned for use in food and beverages by the United Kingdom, European Union, Japan, and other countries.

Food manufacturers use synthetic food dyes, such as blue 2, yellow 5, and red 40, to enhance the coloring of certain foods and ingredients to make them more appealing to consumers. Some foods that contain food dyes include beverages (like juices, sports drinks, and sodas), candy, and glazes used in baked goods and sweets. They’re even used in silly things like making mustard more yellow, salmon more pink, and jarred pickles the perfect shade of yellow-green. And don’t even get me started on maraschino cherries!

Research has linked consumption of synthetic dyes to an increased risk for numerous conditions, like tumors and hyperactivity in children. What’s even more infuriating is that the U.S. used to use natural food dyes until the mid-19th century. But then, food manufacturers realized it was much cheaper to use chemicals, which turned food even brighter colors.

Synthetic food dyes are banned in Europe and Australia, where more natural coloring compounds are used. For example, in most of the world, Fanta contains actual fruit juice and is dyed naturally. But Americans enjoy Fanta colored with petroleum-derived artificial dyes like red 40 and yellow 6.

Genetically modified organisms (GMOs) have been around since the 1980s. But they have become a controversial topic — and for good reason. While they’re widespread in the U.S. — with most U.S. soy, sugar beets, corn, canola, cotton, and alfalfa being GMO crops — many European countries have banned or regulated them due to public safety concerns.

One common genetic manipulation involves altering DNA in certain crops to make them resistant to herbicides. One of the most common herbicides used in conjunction with these GMOs is glyphosate, the primary active ingredient in the weedkiller Roundup. Glyphosate consumption is linked to cancer. In fact, several people have won cases that allege glyphosate caused their cancer. Bayer, the manufacturer of Roundup, is currently fighting cancer lawsuits that involve over 13,000 people. As of June 2019, there were bans or major restrictions on use of glyphosate in Argentina, Australia, Austria, Belgium, Brazil, Canada, Colombia, Czech Republic, Denmark, El Salvador, France, Germany, Greece, India, Italy, Luxembourg, Malta, Netherlands, New Zealand, Portugal, Scotland, Slovenia, Spain, Sri Lanka, Sweden, Switzerland, Thailand, and the United Kingdom.

The arsenic-based drug roxarsone, was routinely used in chicken in the U.S. until July 2011, when Pfizer decided to stop selling it. However, there is no actual ban on the use of arsenic in the raising of chickens for food. Roxarsone was used to increase the pink coloring of raw chicken meat, to speed the growth of the birds before slaughter, and to prevent parasites in the chicken’s stomach. Research shows chronic exposure to arsenic can lead to anemia, skin lesions, kidney damage. It can also increase the risk for certain cancers, miscarriage, and birth defects. The European Union banned the use of arsenic-based drugs, while many chicken products in the U.S. still contain it.

In the U.S., ractopamine is a muscle enhancer for pigs, cows, and turkeys. And, like other harmful substances used during the raising of animals, it doesn’t just go away when the animal is slaughtered. Some of it is still left in the meat you buy. Ractopamine is banned in 122 countries including Russia, mainland China, Taiwan, and many countries across Europe. This is because it’s been linked to reproductive and cardiovascular damage in humans, as well as chromosomal and behavioral changes.

Herbicides, insecticides, and fungicides are widely used on crops in the U.S. food system to keep them free of bugs and diseases. Meanwhile, other countries see (and act on) the danger they pose to humans. Of the 374 active ingredients authorized for agricultural use in the U.S. in 2016, the European Union banned 72 of them. Wow.

Olestra, or Olean, is a cholesterol-free fat substitute created by Procter & Gamble. The FDA approved it for use in foods in the 1990s and it’s still used in certain potato chips and french fries. But Olestra may cause extremely unpleasant digestive reactions, like diarrhea and leaky bowels. Consuming a lot of it can also lead to deficiencies in fat-soluble vitamins A, D, E, K, as well as carotenoids. Both Canada and the United Kingdom have banned the ingredient.

Synthetic hormones, such as rBGH and rBST, are widely used in the U.S. dairy industry. The primary reason for this is to increase milk production in dairy cows. However, rBGH increases IGF-1 levels in humans and may increase the risk of developing cancer. Additionally, cows treated with rBGH are more likely to develop mastitis, an udder infection, requiring treatment with antibiotics. Canada, the EU, and other countries have banned these compounds.

What You Can Do

The question you might be asking right now is, what can I do to protect myself from these banned ingredients? While we can’t immediately control what food companies put in their products, we don’t have to eat them. And there are steps you can take to make healthier, safer food choices, wherever you live.

Here are some things you can do to make sure the food you eat is as safe as possible:

The good news is, you don’t have to wait for the U.S. FDA or USDA to change policy for you to make informed choices about what you eat and feed to your family. Every bite you take is a chance to take a stand for a safer and healthier life.