by Lola Méndez: One of the weirder reactions to the early days of the COVID-19 pandemic was how many people flooded stores to stockpile loads of toilet paper… 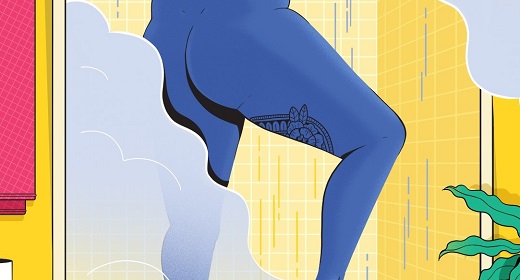 It was hard to tell how much of the hoarding was due to initial fears about the virus and how much was panic purchasing for fear that there would be none left on the shelves.

Regardless, I was never too concerned about the potential of a toilet paper shortage, because I have a little secret.

I pee while I’m in the shower. You should too.

You wouldn’t be alone. In fact, 61 percent of Americans pee in the shower, including Kelly Clarkson and Madonna.

Before you turn your nose up, hear me out.

Toilets use between 1.28 and 7 gallons per flush, depending on how old your toilet is. On average, people use 60 gallons of water each day. Average pee time for all mammals, including humans is approximately 21 seconds.

Of course, you don’t need to completely abandon your toilet and become an exclusive shower tinkler. There’s no need to extend your shower time just to relieve yourself, either. Think of it as a way of multitasking when the opportunity presents itself.

“The soap you use to wash and the constant flow of water in the shower should provide an element of passive cleaning of the shower without having to do much else,” he says.

Surgical nurse, Brook Plato stresses the importance of a thorough rinse afterward. “Moist environments can grow yeast and other organisms,” she says. “Always blast the [shower floor] with a few seconds of hot water to get rid of all your bodily detritus after you’ve bathed.”

Toilet paper is heavy on the environment (and your wallet)

Fact: most toilet tissue is made from virgin wood pulp. That means we’re literally flushing forests down our drains every day. Deforestation puts Indigenous people, flora, and fauna at risk when habitats are destroyed. That’s nearly 10 million trees a year globally that are cut down so we can wipe.

The U.S. consumes the most toilet paper on Earth. In the States, each person uses 141 rolls of toilet paper per year. The logging industry clear-cuts 1 million acres of North America’s boreal forest, annually (and part of that is for toilet paper). Essentially, you can reduce the tree-to-toilet cycle a bit by peeing in the shower.

Combining pee time with shower time can also put a dent in your household expenses. The U.S. has the second-largest tissue and hygiene paper market after China, at $32 billion. If you pee in the shower at least once a day, you’ll only need to buy a roll of toilet paper every 50 days.

Gupta says that toilet paper wipes urine around more than away; and can leave behind residue and bacteria, leading to skin irritation.

“Aggressive toilet paper use or use of poor quality toilet paper can lead to micro-abrasions,” he says. “Washing with water at an appropriate temperature is potentially more gentle on the genitals. Water washes any urine, feces, or bacteria away.”

Peeing in the shower isn’t gender-specific, either. The act frees you from the risk of accidentally spreading bacteria by wiping back to front. And if you normally stand while peeing, urine spatter can reach eye level and up to 5 feet to either side of you. So, occasionally saving it for the shower cuts down on the accidental wall decoration.

“Urinating in the shower under running water reduces backsplash of urine and sends the diluted urine almost directly to the drain,” notes Gupta. “Standing next to someone while urinating almost guarantees that you’ll have the other person’s urine splatter onto you.”

If you share a shower with roommates, give them the courtesy of running this bathroom habit by them. For one thing, it’s just good roommate etiquette. But also, everyone needs to be aware that though urine may be sterile, it doesn’t necessarily stay that way.

“Although urine is largely water, electrolytes, urea, and other wastes, it loses its sterility as it exits your body through the urethra,” Gupta says. “It’s extremely unlikely to cause infection, but keep in mind that urine does contain a small amount of bacteria.”

Before your roommate starts packing their bags, assure them there’s nothing to worry about.

“With a constant flow of running water to wash the urine down the drain, it’s unlikely to be a significant source of infection, even if it contacts broken skin,” Gupta says.

He does recommend avoiding peeing in the shower when you have a urinary tract infection, however. And, as always, clean your shower, weekly, using disinfectant.

Know when to hold it

Unlike peeing, this is not a hygienic or practical habit, even if you’re going on a toilet paper strike. Investing in a bidet or going with some toilet paper alternatives is the better way to go.

Also, your freedom to pee in the shower isn’t a license to relieve yourself anywhere you think the water’s moving (looking at you, pool-urinators).

Mixing urine with chlorine in a pool creates a toxic chemical called cyanogen chloride, which can irritate the eyes, nose, and lungs. So, if you think peeing in the pool is as harmless as peeing in the shower, for swimmers’ sake, please think twice.