Forget Planting Trees: This Company Is Making Carbon Offsets By Putting Seaweed On The Ocean Floor

by Adele Peters: Running Tide grows kelp, which sucks carbon from the atmosphere. Then it just lets it sink to the ocean floor, where the carbon will stay for a thousand years… 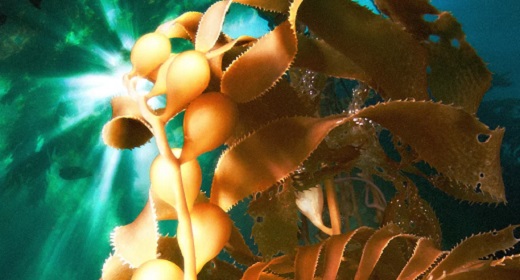 Off the coast of Portland, Maine, an aquaculture startup that raises shellfish is also working on a more radical project: raising kelp in the open ocean, then sinking it to the seafloor to sequester the carbon inside.

The company, called Running Tide, argues that the approach could be essentially a permanent way to deal with the excess carbon in the atmosphere. Like trees, seaweed forests suck in carbon from the air as they grow. But while carbon in forests on land can sometimes be lost—as in California, where more than 2 million acres of trees have burned so far this year—kelp that sinks to the bottom of the ocean can stay there for centuries.

“Once it goes down below 1,000 meters, it’s not coming back up, because the pressures are so great,” says Marty Odlin, the founder of Running Tide. “So you can get at least 1,000 years of sequestration. More likely, it will turn into oil or sediment and be sequestered on the geologic timescale—millions of years.”

Done at a large scale, the process could make a meaningful difference. A 2019 study that looked at the potential for seaweed farming to offset carbon emissions calculated that growing and sinking macroalgae in a tiny fraction of the federal waters off the California coastline could fully offset emissions from the state’s enormous agriculture industry, for example. Negative emissions projects such as this—or forest restoration or technology designed to suck carbon from the air—will be necessary to reach climate goals. Shifting to zero-carbon solutions such as renewable energy is also necessary, but the world will also need to capture the excess carbon that already exists (and offset sectors such as aviation that will be slower to decarbonize). 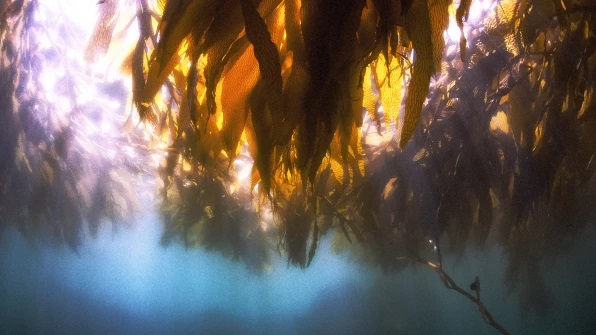 The tech company Shopify, which has started investing a minimum of $5 million annually in companies with promising sustainability solutions, selected Running Tide as one of several in its first round of investments, announced on September 15. “Running Tide’s pilot project is offering a new, scalable solution for high-quality, long-term carbon removal, leveraging the mass and depth of the ocean,” says Stacy Kauk, the director of Shopify’s Sustainability Fund. “They’re taking a natural system and optimizing it to increase carbon removal capacity—this has low capital costs when compared to other solutions, with high potential for economies of scale.” The startup will use the new investment to launch a pilot project later this year.

Some other companies are focused on how to grow large-scale seaweed farms near coastlines. Primary Ocean, a Los Angeles-based company, plans to soon test its cultivation infrastructure in waters off California. Running Tide says that makes sense for kelp farms that plan to sell a product—whether for food, or biofuel, or, say, to make cattle feed that can reduce the emissions from cow burps. “If you’re trying to get kelp back, you need to tend to it more often because you need it to be a certain quality,” Odlin says. “You need to tend to it, and you need it to be accessible, so they need to be close to shore, where you can get them.” If the only goal is to sink the kelp, however—and sell the offsets—the kelp can grow far out in the ocean.

The company plans to send its microfarms into open ocean currents targeted for their ability to support kelp. “The currents take it on this journey through nutrient-rich water that is appropriate for temperature, salinity, and any other factors that contribute to kelp growth, and they end over the abyssal plain,” he says. “And then we can sink the kelp.” The kelp will be supported by biodegradable buoys that are designed to break down after a certain period of time. The team is experimenting with various options; one version has a plug that the ocean slowly wears down, creating a hole that sinks the whole platform.

The startup has tested the basic principles of the concept near the shore and will use the investment from Shopify to begin testing it farther out in the ocean, tracking each microfarm to see how it performs. Odlin, who comes from a family of several generations of Maine fisherman, has seen the impacts of climate change firsthand and recognizes how important it will be to act quickly. “I look at where I’m from, and I look at opportunities shrinking around me,” he says. “And I look at California on fire. It’s like we essentially have Godzilla stomping all over the world and just destroying everything, and coming for everything that we love. At some point, you got to fight it.”