by Bruce Horovitz: Sal Khan vividly recalls his best day at work. The founder and CEO of Khan Academy got what bosses and employees long for in the workplace: validation… 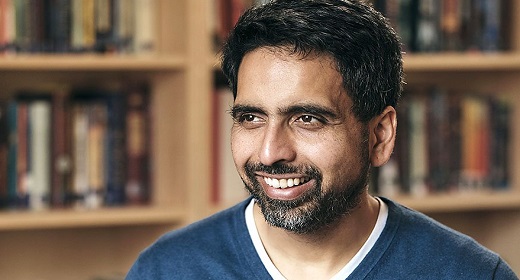 Public validation for Khan’s then little-known and financially struggling online educational website, Khan Academy, came from none other than Microsoft (MSFT) founder Bill Gates. While interviewed at the Aspen Ideas Festival in 2010, Gates said his own kids learned using Khan Academy’s video lessons.

Never mind that Khan was pretty obscure at the time.

“I didn’t know that he, or anyone like him, knew about Khan or knew we existed,” Khan told Investor’s Business Daily. Now Khan — from his hometown of Mountain View, Calif. — is a household name around the globe.

It doesn’t always take a Bill Gates to validate a company’s raison d’etre. But for Khan Academy, it was a springboard to success — with Gates flying Khan up to the Microsoft campus in Seattle to meet him just a few weeks later.

“This was after 10 months of living off of savings and doubting myself and wondering if I’d made a huge mistake,” Khan said.

Mistake? Khan Academy is now the world’s largest educational platform with more than 100 million registered users. Users globally log 1.5 billion minutes of online usage per month in 100 countries and 46 languages. Never mind that it’s a nonprofit that still must beg and borrow for funding.

It takes a special kind of leader to pull this one off. Khan aces it, ranging from his four degrees from Massachusetts Institute of Technology to his MBA from Harvard University and his polymathic persona.

Just getting started sets apart those who succeed. That’s precisely what Khan did in 2008. He left his high-paying but unfulfilling job as a hedge-fund manager to found Khan Academy. It was the first nonprofit online venture with the expressed mission of providing free, world-class education to anyone, anywhere.

“A leader has to have the confidence to take action,” said Khan, who is 43. “You can’t tell people to do things that you won’t do yourself.” Great leadership, he says, is a constant balance between humility and self-confidence. “Great leaders lead with action,” he said. Khan calls it the “learn-from-doing” school of leadership.

Aiming high is what Khan did — subconsciously — back in 2004. That’s when he started to tutor his 12-year-old cousin, Nadia, on math. That soon evolved into distance tutoring online with 15 cousins.

Back when he was in high school — and in college — Khan did a lot of tutoring and continuously found himself drawn to educational projects. Even when he took his hedge fund job, he promised himself, “I’ll do this hedge fund thing until I start my own school.” After tutoring all his cousins online, he had an ah-ha moment that he could take his online tutoring technique as large as the planet — which he did.

For many employees, happiness and success is less about working 9-to-5, and more about participating in something with meaning, says Khan. Instead of a 20% pay raise, more people are interested in the flexibility of a four-day workweek, Khan says. “We can have a world where people can have more meaningful family time and still be just as productive,” he said.

“I’m very habitual in everything I do,” said Khan. He starts the day by making his own bed when he gets up. That way, he said, “I start the day with a little win.”

Then he runs one mile, meditates for 30 minutes, then takes a cold shower. And on a really good day, he can do 20 pullups. He typically feels so good after following this daily routine, it often leaves him asking himself, “Is there anything I can’t accomplish today?”

One thing Khan vows will never change about Khan Academy: free, world-class education for anyone, anywhere. For a nonprofit, that requires constant innovation and disruption and the ability to attract top talent. “Staying true to your mission is hard,” he said.

Few things test a company’s leadership more strenuously than a world crisis such as the current pandemic. Khan Academy and its 250 employees were already working virtually. That made the transition easier, says Khan. Even before Covid-19, about one-third of its staff worked remotely. “We’d already built our muscle around supporting remote work,” said Khan.

Covid-19 made Khan Academy’s stated mission even more critical. The pandemic stress-tested everything from its online tutorial services to the operation of its servers. Before the pandemic, Khan Academy was seeing 30 million minutes of online learning globally on a typical school day. Now, that number has tripled to 90 million minutes per day.

“There are 50 things we only wish we’d had in place that would have been useful for a Covid-world,” said Khan. Then, again, he said, “Covid is forcing the issue that learning should not be bound by time or space.”

Know How To Adapt

When the Covid crisis hit, Khan led an “instantaneous pivot.” The goal? Fine-tune the online learning platform specifically to serve students, parents and teachers who were suddenly faced, for the very first time, with distance learning, says Curtis Feeny, a member of the Khan Academy board.

Detailed daily classroom schedules were created for all age groups. “So, if I’m a parent or teacher or student and have no idea how to continue my learning, I can look at this template and have very good, actionable ideas,” said Feeny.

Khan keeps stretching its resources to support students, teachers and school districts. It’s also increasing the number of its classes to prepare students for the grade they are entering. For example, its “Get Ready for Grade Six” tutorial makes sure students have their prerequisites for entering 6th grade.

Put Your Resources To Good Use

Covid-19 has also stretched Khan Academy’s resources and its $60 million budget. “I feel a stress in my body every time I say this number,” said Khan. Yes, that may equal the annual budget of a large high school, but Khan Academy has more than 100 million users.

So Khan continues to seek major sponsor, donors and financial backers for Khan Academy even as he projects a deficit for 2020 and possibly for 2021. Meanwhile, he’s working with volunteers on a project called schoolhouse.world, which, he says, provides free live tutoring to any student.

“Interest has increased in Khan Academy because we have an essential service,” said Khan. “We were essential pre-Covid. Covid has made a lot of folks realize that we are levelers they can use to help themselves right now.”

Khan’s advice to pandemic-obsessed parents: Relax. “Don’t feel like you have to re-create school for them or you’re a bad parent,” he said.

Your kid will be fine if he or she can invest just 30 minutes daily in each of these three subjects: reading, writing, and math. Then, if you can coax them to discuss what they read or what they wrote with you, that’s even better. At the same time, Khan, who is the father of three kids (ages 11, 9, and 5), says that even during a pandemic, socially distanced play dates for kids also are critical.

Khan takes advice from his three preteens very seriously. He regularly leverages his personal experience as a father (and tutor) to his own kids as a way to “inform his intuition” at Khan Academy, says Ginny Lee, president and COO of Khan Academy.

How does one guy know so much about so many things?

“I enjoy immersing myself in learning things,” he said. “I don’t want to teach anything unless I deeply and intuitively know it myself.” Perhaps, then, he should even consider teaching music.

Few folks know this about Khan, but he sheepishly confesses that, at age 15, he was lead singer in a heavy metal band that never quite got off the ground.

If only there had been a Khan Academy-like lesson at the time on how to play guitar. Instead of a tech star, Khan could be a rock star — although millions of people already see him as one.