A Meditation On Self Prayer – Pt 1- Donna Quesada

By Donn Quesada: True prayer is an expression of the soul, an urge from the soul… 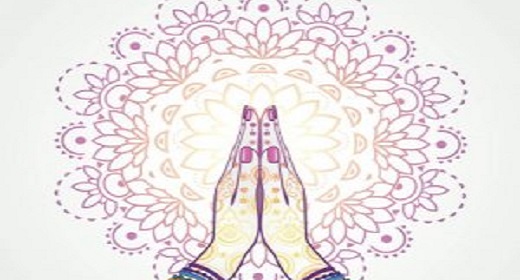 It is a hunger for God that arises from within, expressing itself to Him ardently, silently. Vocalized prayers are wonderful only if the attention is on God, and if the words are a call to God out of the abundance of the soul’s desire for Him. But if an invocation becomes merely a part of an ecclesiastical ceremony, performed mechanically—concentration on the form of religion rather than its spirit—God doesn’t much like that kind of prayer.
~Paramahansa Yogananda

I remember my beloved grandmother teaching me how to say my bedtime prayers when I was little. I liked saying them. For many years, I felt that something was missing and incomplete whenever I would forget them. I always had a spiritual longing, for as long as I can remember, but as a child, I didn’t know how to interpret these feelings. Also, coming from a decidedly non-religious home, I lacked any kind of framework for anything resembling a spiritual practice. It makes sense to me now, why I would embrace my grandmother’s urging to prayer. It is also why I jumped at the opportunity to go to church with a religious friend of mine.

You see, my mother, raised in Catholic school herself, swore it off, like so many others, who found the heavy-handed methods of institutionalized Catholicism rigid and hostile to metaphysical questions. So, she left it to her own children, to decide and choose for themselves about all spiritual matters.

Because I was now the “third generation,” I was entirely without the resistance my mother had, to my grandmother’s religious ways. And so I not only listened… I lapped it up.

But then, as a college student — especially as a philosophy student — I encountered all of the arguments against God and later even lectured on Aquinas’ notoriously flawed five proofs for the existence of God. I pointed out all of the irrefutable logical fallacies to my own students.

During those years, I wondered about the absurdity of it all. God, that is. And by extension, the whole idea of praying to this God, which, as shown, doesn’t exist! In my logically trained young mind, I also wondered about the idea of a God that would proceed with his plans for annihilation and devastation, only to suddenly cancel those plans at the request of a petitioner.

After all, I reasoned, that’s why people pray… to convince God to alter some undesirable course of events. How could he change his mind so whimsically, the way we waffle about, while standing in the cereal isle, wondering which granola to buy?

Then one day, I realized how differently things can look when you flip them around. Or, when they’re flipped around for you.

I eventually came to see that God is within, not without. A part of us, not separate from us. The kingdom of God is within.

Even when you meditate on the name, or the form, of a God or Goddess… you are, in fact, meditating on your own self, not on some external object. ~Amma

Praying isn’t about loving a God out there. And changing the course of events is secondary to the understanding of prayer as connection, rather than petition. It is about connecting with that which has no boundary, of going beyond the confines of what you thought of as your finite self.
This sensation of expansiveness leaves no room for fear, as in the idea of fearing God, for, there’s no room for fear where divinity lives.

About altering the course of events… divine consciousness reveals our own role in creating the very shift we seek. And that makes it all the more awe-inspiring and wonderful. As Zen says, “you create your own universe,” or, as Yoga sometimes puts it, “you control the universal consciousness.”

In the end, praying isn’t really about personal pleas at all, but rather, the heart-felt expression of gratitude and completeness. And this sensation has the tendency to attract more of the same. This is the real miracle. And the exquisite sensation of connection is not necessarily meant to serve some purpose. Like a flower reaching up toward the light, leaning over permanently to one side with time, devotion expresses this feeling of affection and longing, but with no object of desire and with no agenda.