Zoom Is Failing Teachers. Here’s How They Would Redesign It

by Suzanne LaBarre: Millions of students are learning through Zoom this fall. So why does it still feel like a corporate meeting app that has been MacGyvered into an education platform? 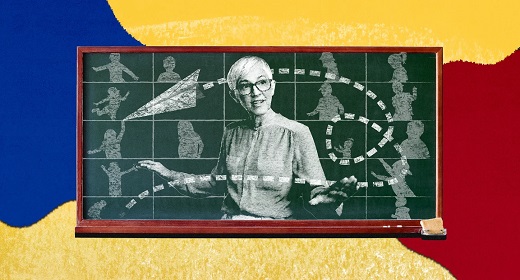 Last spring, when shelter-in-place orders went into effect, my daughter’s preschool teacher heroically tried to adapt her classroom to the virtual world. At first, she had an assistant, whose primary job was to mute and unmute kids in Zoom to imitate the experience of calling on students in class. The task is harder than it seems: You have to scan a Brady Bunch-style grid of two dozen wiggling children for raised hands, click “unmute” under one of their names, and cross your fingers that they are not muted on their end (half the time, they are).

After a few months, the assistant was furloughed, leaving my daughter’s teacher to manage the mute function on her own—while also trying to present lessons, keep track of time, and babysit a group of increasingly stir-crazy 3- to 5-year-olds. She was juggling too many competing demands. She might as well have been asked to play Rachmaninoff while riding a unicycle.

Countless teachers are facing similar problems this fall, as districts across the country usher in the school year remotely to help curb the spread of COVID-19. Conventional wisdom has it that remote learning is an inferior substitute for in-person classes, useful only in an emergency that threatens the health and safety of teachers, students, and staff. And it’s true that the circumstances around distance learning pose tremendous challenges, exacerbating inequity and placing impossible demands on working parents. But class via computers itself is not inherently flawed. It’s the remote platforms that are failing teachers and students.

Zoom, in particular, has struggled to adjust to its newfound prominence in the educational firmament. More than 100,000 U.S. school districts and roughly half the country’s higher-education institutions use the videoconferencing platform in large part because it’s easy, at least in theory: Just click a link, and start teaching. In practice, the experience is more complicated. Last month, Zoom went down for hours due to an unspecified problem, disrupting the first day of school for many children and college students. Last spring, the platform experienced several high-profile hacking incidents, which caused New York City schools and other districts to temporarily ban Zoom.

The company quickly rolled out a series of security upgrades. But it has been slower to address workaday complaints about its UX. Classes were already underway at school districts across the country on August 20 when Zoom finally released improvements critical to educators, such as a way of including ASL interpreters and more control over muting. Many other important features remain unavailable. So we asked teachers—ranging from elementary school teachers to college professors—how they would redesign Zoom to work better for themselves and their students.

A MUTE FUNCTION EVEN 6-YEAR-OLDS CAN UNDERSTAND

Muting is a key classroom tool online, allowing teachers to both minimize disruptions and encourage participation. But as I witnessed last spring, young children often don’t know how to use their microphones, and not all students have a parent sitting there to help them. It doesn’t help matters that the “mute” button is small and right next to the “start video/stop video” button—a poor design choice for little hands with limited dexterity. “It’s pretty constant for me working with 6-year-olds to have to tell them to mute or unmute themselves,” says Danielle LaBarre, a first-grade teacher at Ruby Bridges Elementary School in Alameda, California (full disclosure: She’s my sister-in-law).

In August, Zoom updated its platform to let teachers selectively unmute students. But the feature is buried in Zoom’s web portal settings. And once teachers activate it, students or their parents have to opt in through a pop-up message. This is to address potential privacy concerns (fortunately, they only have to opt in once). Of course, if they don’t, the teacher is right back where she started, wasting precious class time reminding students to unmute themselves.

One of the biggest complaints among teachers I spoke with was the difficulty of replicating small-group learning in Zoom. You can divide students up into breakout rooms, but there’s no way for a teacher to observe every group and give feedback all at once, making it tough to know whether students are staying on track.

“I might pose a big question about the perspective of character in a story and have students draw a connection to their own lives in a pair share,” says John Cherichello, a 7th-grade English Language Arts teacher at MS 88 in Brooklyn, referring to an in-person teaching technique in which students partner up to discuss a topic one-on-one. On Zoom, he has to drop into each breakout room to pose the same question over and over again, which is a huge time suck. A better design would give Cherichello an overview of all the breakout rooms and allow him to chime in, like an omniscient narrator, at opportune moments. “An easy breakout room function would really help make the virtual classroom feel a little bit more like the real thing,” he says.

Zoom’s chat feature is another major pain point for many teachers. “One of the things I hate the most about Zoom is the chat,” says Brandon Ward, who teaches user experience design to continuing education learners at Southern Methodist University. “It’s really, really difficult to follow.”

Indeed, the chatbox, which appears to the side of Zoom’s main view, is frills-free to the point of wringing any nuance from conversations. You can’t have side conversations (using threads, for instance), without inundating the main chat. There are no emoji readily available. To find an emoji, you have to click “edit” in the nav bar, then “emojis & symbols,” and an emoji menu appears—a cumbersome process that defeats the purpose of using emoji as shorthand for written words.

Ward’s suggestion? Establish a stronger information hierarchy. “I would design it for moderators, so they can see a blown-out version of the chat,” he says. “Then I would create tools for distinguishing between comments, questions, and DMs, and make it more obvious when people are raising hands or clapping. Some of my meetups have close to 500 people. The chats become a constant stream. It’s overwhelming.”

A RICHER WAY OF PRESENTING LESSONS

Jamie Ewing, a science teacher for grades K through 5th at PS 277 in the Bronx, laments how Zoom “flattens” his teaching style. “When I’m in front of the classroom, I get to interact with the content,” he says. “In a Zoom meeting, you don’t have that option. Either you’re the focus or the content is the focus. When you switch over to screen share, you disappear, and you lose the ability to make eye contact [with students].”

Elise McHugh, a biology and chemistry teacher at Groton-Dunstable Regional High School in Groton, Massachusetts, echoes the sentiment. “I found myself holding up my paper copy of the periodic table, and then another paper copy of another reference sheet, and then moving the computer to face my physical white board when solving a chemistry problem” last spring, she says. “It would be easier if I could toggle between these documents quickly through Zoom, and even be able to have a cursor on them.”

Ewing has instead started testing a third-party app called Prezi Video, which enables him to overlay graphics onto Zoom lectures to liven up his lessons. In one example, images of a baseball game pop up behind him to illustrate a lesson on math angles. “Adding an extra layer makes it more inviting and more emotionally engaging,” he says.

Would he rather be able to create media-rich presentations directly in Zoom? Sure, he says, but “at this point, I’ll take what I can get.”

AN ENTIRELY NEW PRODUCT FOR EDUCATORS

McHugh was one of several teachers I spoke with who called for Zoom to spin off an app exclusively designed for educators. “I would recommend [Zoom] make a separate program, much like Google did [with Google Classroom], with features specific to the needs of teachers and students,” she says. “This is a niche market that Zoom could find a place in this coming school year.”

Zoom, for its part, says it has no plans to release such a product. “We’re focusing on our training,” says Zoom’s Global Education Lead Anne Keehn. The company recently held a virtual training summit for 40,000 educators from 150 countries and plans to continue its focus on educating teachers about the features Zoom has, not on developing new software from scratch. “We don’t see a need for a separate product,” she says.

Indeed, Zoom’s latest round of updates is geared toward teachers: Teachers can now create virtual seating charts and spotlight a group of students to approximate an in-person class presentation. There’s also a “professional music mode,” an audio feature explicitly designed to help music teachers improve the quality of their lessons. Keehn suggests more education-specific tweaks are on the way.

But these are largely iterative changes, and Zoom could be ceding its sizable competitive advantage if it doesn’t fully embrace its starring role in U.S. education—especially since aspects of distance learning will likely stick around long after COVID-19 abates.

“What it really comes down to is: Does Zoom want to continue as a meeting service that’s doing emergency remote learning?” says Shanna Katz Kattari, an assistant professor of social work and women’s studies at the University of Michigan. “[Distance learning] is going to continue for at least another year, if not longer. People are going to recognize that online learning is completely valid and effective. It would be a really wise investment to make a secondary product for classrooms.”