Astronomers Observe Star Being ‘Spaghettified’ By A Supermassive Black Hole

by George Dvorsky: A star 215 million light-years away has been obliterated by a supermassive black hole, making it the closest observation to date of stellar spaghettification. 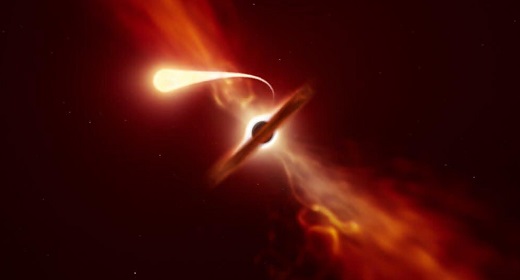 A doomed star caught in the orbit of a supermassive black hole will eventually hit a kind of gravitational sweet spot that turns everything to shit. No longer capable of keeping its physical integrity, the star begins to rapidly collapse in a process known as a fast-evolving tidal disruption event. When this happens, stellar debris bursts out from the star, forming a long, thin stream, half of which gets sucked toward the black hole; the other half is blown back into space. The thin stream eventually catches up to and slams into itself, releasing energy and forming an accretion disc. If that’s hard to visualise, here’s a handy video showing the process:

The destruction produces a bright flash of light, which astronomers can observe on Earth. A few of these events are captured each year, but new research published in Monthly Notices of the Royal Astronomical Society describes the nearest case of stellar spaghettification ever recorded, at 215 million light-years away. The event, designated AT2019qiz, was chronicled last year, and it appeared at the core of a spiral galaxy located in the Eridanus constellation. The unfortunate star was roughly the same size as our Sun, and it was torn apart by a supermassive black hole roughly 1 million times the Sun’s mass.

The event was initially captured by the Zwicky Transient Facility, with follow-up observations done with the European Southern Observatory’s Very Large Telescope, the ESO New Technology Telescope, and Harvard & Smithsonian’s MMT Observatory, among other facilities. Astronomers tracked the fading flare for six months. The new paper was led by Matt Nicholl, a research fellow at the University of Birmingham.

Spaghettified stars tend to be hard to study because they’re often clouded by copious amounts of dust and debris. Thankfully, that was not the case with AT2019qiz.

The researchers found that, “when a black hole devours a star, it can launch a powerful blast of material outwards that obstructs our view,” explained Samantha Oates, an astronomer at the University of Birmingham, in an ESO statement. In this case, however, AT2019qiz was spotted shortly after the star was ripped apart, providing a clear view of the phenomenon.

“Because we caught it early, we could actually see the curtain of dust and debris being drawn up as the black hole launched a powerful outflow of material with velocities up to 10,000 km/s,” said study co-author and Northwestern University astronomer Kate Alexander in a Harvard & Smithsonian press release. “This is a unique ‘peek behind the curtain’ that provided the first opportunity to pinpoint the origin of the obscuring material and follow in real time how it engulfs the black hole.”

This allowed the scientists to detect the outflowing of gas as the star was torn to shreds and as its stellar material shot toward the black hole. This event, which was captured in optical, X-ray, ultraviolet, and radio spectra, will now provide an excellent case study for the ways in which matter behaves around supermassive black holes.