Did You Know You Can Control Machines With Your Mind(fulness)? 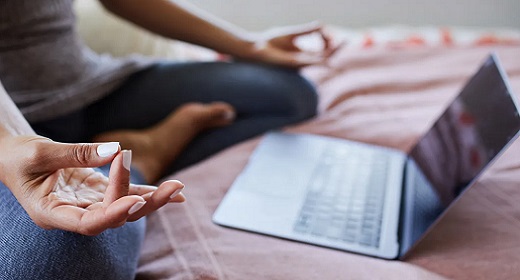 Mindfulness, when applied to mind control may seem like a paradox, but a new study shows that meditation improves an individual’s ability to control a computer directly from their mind.

Brain-computer interface (BCI), sometimes referred to as brain-machine interface, is a technology has been around since the early 1940s, when German neuroscientist Hans Berger invented the electroencephalogram (EEG) and discovered alpha wave activity in the human brain. In the early 1970s, the term “BCI” was coined by Belgian computer scientist Jacques Vidal during his research on biocybernetics at UCLA. The first cochlear implants, a form of BCI technology that inputs artificial sensors into the human auditory system to provide a sense of sound to those who are deaf or hard-of-hearing, appeared in 1972. By the mid-1990s, neuroprosthetic devices were being developed, allowing the brain to control artificial limbs.

In recent years, research has focused on developing noninvasive forms of BCI using external “sensing” rather than implants. While BCI responds to how we think, it does not necessarily read our minds. The technology detects fluctuations in brain signals with EEG and analyzes them, translating those readings into commands or actions that are carried out by a machine or device. Though noninvasive BCI technology is widely considered a safer route, it takes longer for the human mind and the machine to sync up, and often lacks precision.

But new research from Carnegie Mellon’s College of Engineering shows how mindfulness meditation enhances an individuals’ ability to control noninvasive BCI. The findings, recently published in Cerebral Cortex, present meditation as a practical tool for preparing a person to better utilize BCI technology.

“Meditation has been widely practiced for well-being and improving health—and our work demonstrates that it can also enhance a person’s mental power for mind control and may facilitate broad use of noninvasive BCI technology,” says lead researcher Bin He, PhD, a professor of biomedical engineering and head of the Department of Biomedical Engineering at Carnegie Mellon.

The study, which may have been the largest-scale of its kind according to researchers, tested the hypothesis that meditation techniques could provide a potential training tool for effective BCI control. Seventy-six able-bodied subjects with no prior yoga or meditation experience were randomly divided into a mindfulness-based attention and training (MBAT) group and a control group that did not meditate. The MBAT group completed an eight-week Mindfulness-Based Stress Reduction (MSBR) course as well as a weekend retreat. Each once-weekly MSBR lesson during the study period averaged about three hours. Subjects from both the MBAT and control groups participated in 10 sessions of BCI, which involved moving a cursor across a computer screen using their thoughts. Subjects’ performance on the BCI tasks were monitored with EEG.

Researchers found that the MBAT group was at a significant advantage compared to the control group in both their ability to control BCI and the time it took them to become proficient.

EEG readings showed high levels of activity in the alpha-band, the part of the brain involved in information processing, in the MBAT group during rests between BCI tasks. The results indicate that MBAT modified a specific neural signal that gets picked up by the BCI device. In other words, mindfulness meditation increased subjects’ ability to exert some level of “control” over their brain while in a resting state, which increased the effectiveness of their BCI task performance. If their minds started to wander during rest periods, they were less effective at using the technology.

“The meditation experience enhanced the ability of subjects to focus attention, and thus, enhanced brain wave activities in alpha rhythm that is eventually translated to a better control of a BCI device,” He says.

Another study led by He in 2014 found that experienced meditators could better navigate BCI technology compared to non-meditators, which prompted his recent research on the general population. “I decided to test my hypothesis that an ordinary citizen (without prior meditation or yoga experience) can better pick up the brain-computer interface skills by going through a short-term meditation training,” He says.

His latest results hold a lot of promise for the future of noninvasive BCI and assisting a broader population with disabilities. He says that while a large body of research has contributed to a better understanding of the alpha band, the precise nature of alpha oscillations during mediation remains a scientific mystery. “There are close to 100 billions neurons in our brains, and synchronized activities of brain networks involving numerous neurons may contribute to alpha oscillations,” He suggests. “Yet more is to be revealed in the future.”