Happiness Tips From The Dalai Lama

“I believe that the very purpose of our life is to seek happiness.” — The Dalai Lama 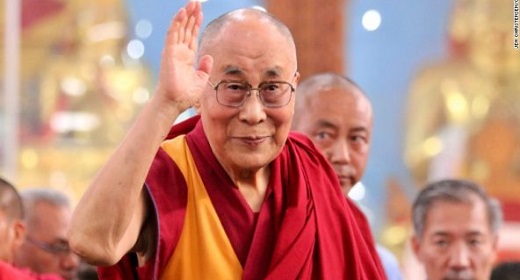 Tenzin Gyatso, His Holiness the Fourteenth Dalai Lama, is the spiritual and temporal leader of the Tibetan people.  As is illustrated by the quote above, the Dalai Lama believes that the very purpose of our existence is to seek happiness.

“The Art of Happiness – A Handbook for Life” is a book written by psychiatrist Howard C. Cutler based on a series of interviews which he held with the Dalai Lama, and augmented by some of the Dalai Lama’s public talks. It contains tips and advice from the Dalai Lama on how to be happy.

Here are three of the ways recommended by the Dalai Lama for cultivating happiness:

You’ll find a detailed explanation of each below.

Happiness Can Be Achieved Through Training the Mind

The Dalai Lama’s approach to happiness relies heavily on learning, reasoning, and training the mind. He explains that through inner discipline we can undergo a transformation of our attitude, our outlook, and our approach to living.

In Buddhism causality is accepted as natural law. Therefore, if there are certain types of events that you do not desire, then the best way of safeguarding against those events taking place is to make sure that the causal conditions that normally give rise to those events don’t arise. Similarly, if there’s an event that you would like to take place, then you should seek the causes and conditions that give rise to that event.

That is, one achieves happiness through learning which mental states to cultivate and which to eliminate, and then making a sustained effort to implement this knowledge.

The Dalai Lama explains that education—focused specifically on understanding and implementing the factors that lead to lasting happiness–is crucial because the more sophisticated your knowledge is about what truly leads to happiness and what doesn’t, the more effective you will be in achieving happiness.

As Cutler explains in “The Art of Happiness”, the most distinguishing feature of the Dalai Lama´s method of training the mind involves the idea that positive states of mind can act as direct antidotes to negative states of mind. Positive mental states which lead to happiness include the following:

Negative mental states which lead to suffering include the following:

The Dalai Lama also emphasizes that working on our mental outlook is a more effective means of achieving happiness than seeking it through external sources, such as wealth or position. As an illustration that external events are not the source of happiness, Cutler refers in his book to people who win the lottery or experience some other windfall. These pe0ple are elated for a while, and then they go right back to the same level of happiness which they experienced before their sudden rise in wealth.

The approach of focusing on your mental outlook also places the secret to happiness within your own hands, instead of leaving it at the mercy of external factors, most of which are not within your control.

The Dalai Lama summarizes his point as follows:

“As long as there is a lack of the inner discipline that brings calmness of mind, no matter what external facilities or conditions you have, they will never give you the feeling of joy and happiness that you are seeking. On the other hand, if you possess this inner quality, a calmness of mind, a degree of stability within, then even if you lack various external facilities that you would normally consider necessary for happiness, it is still possible to live a happy and joyful life.”

Happiness Can Be Achieved By Shifting Your Perspective

The Dalai Lama goes on to explain that the ability to shift perspective is one of the most powerful and effective tools we have to help us cope with life’s problems. He adds that when problems arise, our outlook often becomes very narrow: we focus all of our attention on worrying about the problem. However, what we should do is shift our perspective by doing the following:

Shifting our perspective can make the problem seem smaller and more manageable.

Difficult situations are often opportunities for growth. Cutler interjects that he worked at a facility in which he had a number of run-ins with the facility’s administrator. These run-ins were instrumental in Cutler’s decision to quit working at that facility. Although at first this appeared to be a negative situation, it ultimately led to Cutler finding more satisfying work.

In addition, researchers have conducted a number of experiments which demonstrate that one’s level of life satisfaction can be enhanced simply by shifting one’s perspective and contemplating how things could be worse. How we feel at any given moment has little to do with the conditions themselves, but is rather a function of how we perceive the situation and how satisfied we are with what we have.

When a situation is causing negative emotions, spend some time seriously searching for a different perspective on the situation. A key component to happiness is adopting a flexible, malleable approach to life.

Compassion and Altruism Lead to Happiness

Compassion, the Dalai Lama explains, is a mental attitude based on the rationale that all human beings have an innate desire to be happy and to overcome suffering, coupled with a desire for others to achieve this as well. It’s associated with a sense of commitment, responsibility, and respect toward the other.

In developing compassion one should begin with the wish that oneself be happy and free of suffering, and then take that natural feeling toward oneself and extend it out to include and embrace others.

The altruism that arises from compassion is a key component of happiness. Several studies have shown that helping others can induce a calmer mind and a feeling of happiness. In a survey by Allan Luks conducted with several thousand people who were regularly involved in volunteer activities, over 90% of the volunteers reported the following:

Despite all the loss he has experienced, nearly every time you see the Dalai Lama he’s either laughing or smiling. If you ask him whether he’s happy he answers “Yes” without hesitation. He emphasizes that happiness is built on the foundation of a calm, stable mind. The tips explained above are three of the ways he recommends to achieve ultimate happiness.