by Wes Judd: Sure, it’s old fashioned. But it’s also nutritional rocket fuel, and athletes are making it taste great. Here’s how… 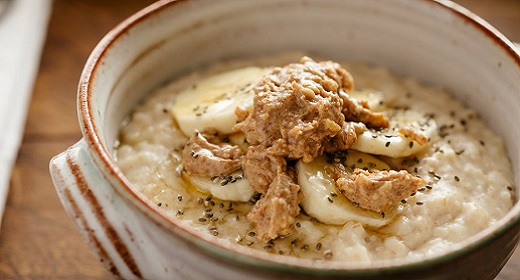 n a world of green juice and chia seed pudding, this age-old dish is the original, and perhaps most powerful, superfood, especially for athletes competing at the highest levels.

“I’ve asked a lot of elite endurance athletes about their breakfast foods, particularly before races, and oatmeal comes up again and again and again,” says Matt Fitzgerald, endurance coach, nutritionist, and author of The Endurance Diet.

You’re most likely to see oatmeal served with a ton of fixin’s, but even a bowl of plain oats holds its own as a nutritional panacea. Oatmeal is a whole grain (unless you buy oat bran—just part of the seed—as opposed to rolled oats) filled with key vitamins and minerals, a low-glycemic carb that provides lasting energy for your workout and helps fuel recovery without causing a sugar crash, and high in fiber to aid your digestive and metabolic systems.

But a bowl of oats is also a big blank canvas, ready to be combined with a truckload of other high-quality, nutritious ingredients that make it even better training food. “That’s one of oatmeal’s great virtues. You can take it in so many directions,” says Fitzgerald.

Even energy bar companies use it. Two-time Ironman champion Jesse Thomas’ Picky Bars just released Picky Oats, a lineup of better-for-the-athlete instant oatmeal chock-full of real ingredients to support performance, rather than added sugars or fake health foods. “I literally believe that besides energy bars, oatmeal is the next most pervasive food for athletes,” says Thomas.

Gwen Jorgensen is arguably the most dominant triathlete alive. In 2014 and 2015, she competed in 12 World Triathlon Series races and won every single one, becoming the back-to-back ITU World Triathlon Series champion. As such, Jorgensen trains a lot—often three or four times in one day—which means she needs to eat just as much. “When I first started training for triathlons, I wasn’t eating enough, and it showed in my performance,” she said last year. “I started to work with a nutritionist, and we decided to start front-loading my days. I now eat a larger breakfast and lunch.” Her breakfast staple: the world’s biggest bowl of oatmeal.

“Gwen Jorgensen’s oatmeal recipe is notorious,” says Fitzgerald. Jorgensen says she eats this at least six days a week, including before races, and never gets sick of it.

Lucy Bartholomew is a 21-year-old Melbourne-based ultrarunner who transitioned to an entirely plant-based diet a few years ago. “I first made the switch based purely on thinking it was the healthier choice. I quickly learned that you have to be educated about it, and that you can’t simply cut out a food group and hope for the pyramid to remain stable, especially as a female long-distance runner,” she says. Oatmeal, which Bartholomew enjoys before and after runs, has become one of her staple dishes, in part because it allows for a variety of ingredients and macronutrients—fat, carbs, and protein. “I always carry a bag of quick oats at airports and hotels,” she says. Before a run, she keeps it classic: a little maple syrup and nut butter stirred in right at the end, then topped with banana and cinnamon. But to expedite her recovery, Bartholomew has a more indulgent recipe.

Cook and top with 1/4 cup each walnuts and chopped dates, plus a sprinkle of cinnamon.

Surfer Mark Healey depends on oatmeal before big days on the ocean. His go-to recipe perfectly balances nutrients, delivering carbohydrates and immediate energy in the form of bananas and raisins, a bit of protein from chia seeds, and satiating healthy fats in coconut oil and butter.

Cook and top with one sliced banana, 1/4 cup raisins, and one tablespoon chia seeds.

Cat Bradley, this year’s Western States winner, is a self-proclaimed oat queen. She’s been eating oatmeal for breakfast for years and sometimes doubles up in one day, eating it for lunch as well. Bradley’s simple breakfast oats dole out fats (nut butter and Frost’d Turmeric-Coconut Oil Snack Frosting), sugars (frozen blueberries and RAD almond-quinoa granola), and carbohydrates (mainly the oats) to keep her fueled and satiated. Her recovery recipe includes turmeric and eggs, which help reduce inflammation and build muscle, respectively.

Cook oats with salt, pepper, turmeric and garlic, and top with seasonal veggies and a fried egg.

“I always have oatmeal before races, but I rarely eat it as my daily breakfast otherwise,” says Kirsten Sweetland, a 29-year-old former junior world champion triathlete. She’s a fan of the KIS method—Keep It Simple—and wants just enough carbs to “keep me full but not too full and give me enough energy to race.”

Cook and top with 1/4 cup frozen berries plus one tablespoon each cacao and hemp seeds.

Steph Violett, a nutritionist, The North Face–sponsored ultrarunner, and winner of the 2014 Western States race, prefers her oatmeal after runs. Depending on her mood, Violett adds proteins and fats in the form of eggs, cheese, and pumpkin puree. “Oatmeal is one of my favorite comfort foods, especially when it’s cold outside,” she says.

Cook and top with cinnamon, one tablespoon maple syrup, and 1/4 cup pecans.