by Johnna Crider: Tesla is continuing to keep its promise to plant more trees… 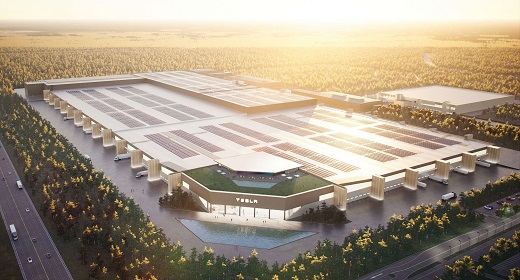 Back in May, Tesmanian reported that Tesla planned three times more trees than it cut down from an industrial forest. Also, it should be noted that this particular forest in Brandenburg was an actual pine plantation, with the purpose of being grown and then cut down for industrial use. However, critics of Tesla didn’t care and were simply mad at Tesla for cutting down trees, even if they were trees that were planted to be cut down anyway.

Tesla decided, on the other hand, to plant not just pine trees, but deciduous trees, which provide more environmental value. They are creating a mixed forest. Tesla, which is paying for the planting of deciduous trees, is creating forests that will hopefully be better prepared for future climate events.

The German Forest Protection Association issued a statement that pointed out Tesla’s factory is justified in cutting down the trees that were planted, in part because they were planted with the purpose of being cut down.

Earlier today, Tesmanian’s Eva Fox shared an update on that promise. By the end of 2020, there will be an additional 183,000 tree seedlings and 22,000 bushes planted on 50 hectares. 70% of the trees are deciduous. Eva also pointed out that Tesla had already planted young trees on 40 hectares of land. This has inspired a famous parody account, Pope of Muskanity, to do something unique as well. 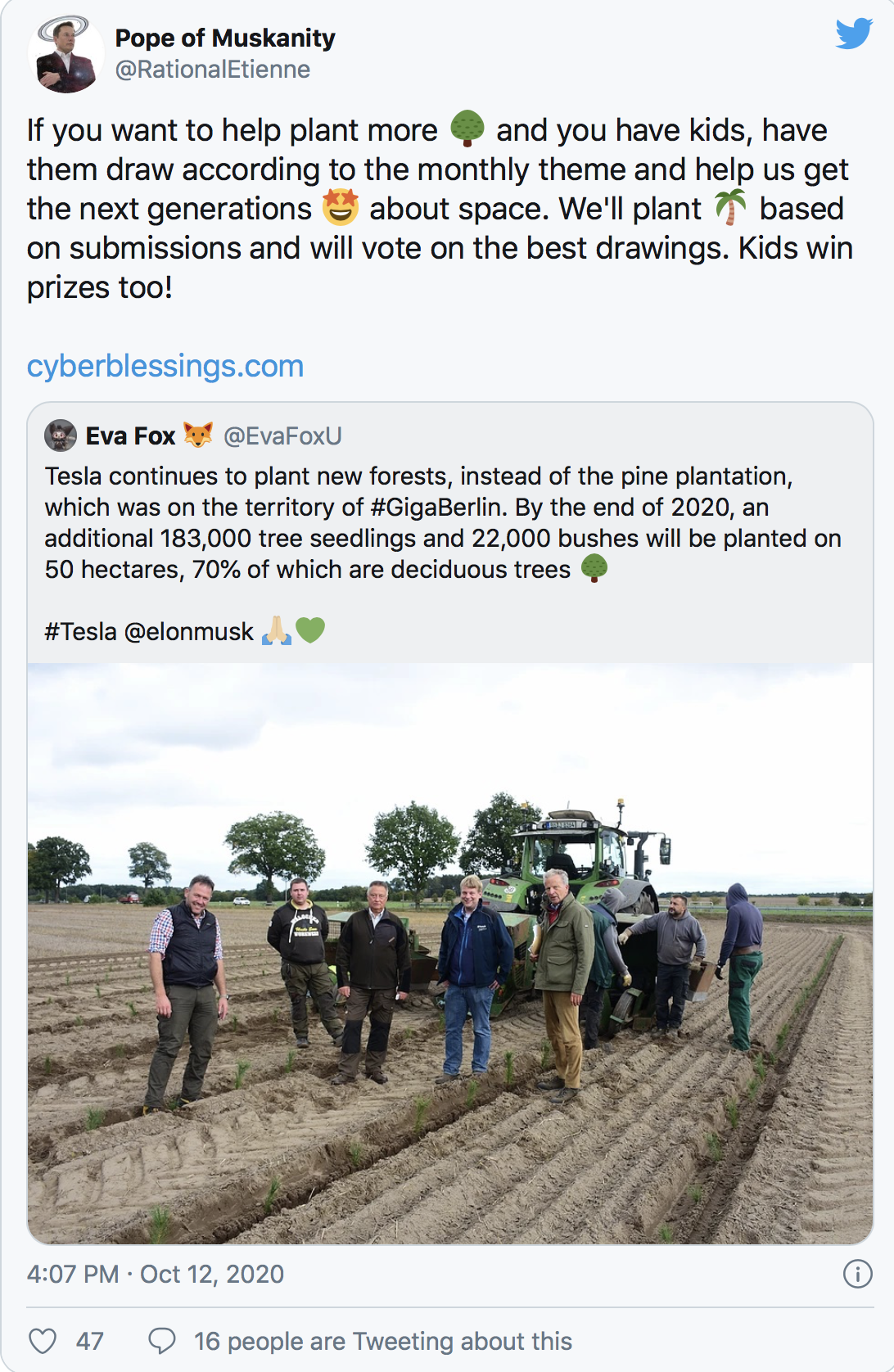 Often going by the nickname Pope due to his parody Twitter account, Etienne is building a website where kids can “ignite their imagination” by creating art based on a monthly theme and win prizes. Cyber Blessings is focused on bringing awareness to planting trees and driving electric vehicles. It’s doing this through themed monthly drawing competitions and wants to “share our hopes and belief in a brighter future for humanity on Earth and beyond.”

Cyber Blessings is collaborating with Team Trees to plan trees. With every drawing submitted, trees are planted. The goal is to make our world a little better. The theme for this month is Human Civilization on an Alien World. You can submit your child’s art through the Contact Us page.

I spoke with Pope, who shared with me what his inspiration for Cyber Blessings was. “After many in the community saw how Elon Musk donated to Team Trees, they asked themselves how they could do some good. Some donated directly, others planted their own trees, and a few started a private initiative to reward kids aged 12 or lower and encourage them to dream by giving them an outlet for their creativity.” He said this was how Cyber Blessings was founded.

“Submissions will result in trees being planted in the kids’ names, and the best drawings according to the community will get some unique gifts/prizes,” Pope added.

Pope Francis Is Focusing On The Environment

Pope Francis made his speech in a video message for the online event, “Countdown Global Launch, A Call To Action On Climate Change.” He pointed out that the coronavirus pandemic showed the need to tackle the climate crisis and related social challenges. “The current economic system is unsustainable. We are faced with a moral imperative … to rethink many things,” he said.

He included waste, indifference to the poor, consumerism, and harmful energy sources as some of the things we need to rethink — moral imperatives. “Science tells us, every day with more precision, that we need to act urgently … if we are to have any hope of avoiding radical and catastrophic climate change,” he noted.

Pope Francis touched upon several things we need to act on. We need to focus on better education about the environment, sustainable agriculture, and access to clean water, as well as a transition away from fossil fuels. As more people focus on switching to electric vehicles and other ways to be more sustainable in their actions, whether it is buying simple things like biodegradable trash bags instead of plastic or going plastic-free (no plasticware, for example), awareness of our own individual carbon impact is helping us discover how we can offset it in a positive way.

Johnna Crider is a Baton Rouge artist, gem, and mineral collector, member of the International Gem Society, and a Tesla shareholder who believes in Elon Musk and Tesla. Elon Musk advised her in 2018 to “Believe in Good.” Tesla is one of many good things to believe in. You can find Johnna on Twitter