The Strange History Of Smooth Jazz: The Music We All Know And Love … To Hate

by Ted Mills: It’s the most unloved and derided of music genres, but the history of Smooth Jazz is not as bad as you might think… 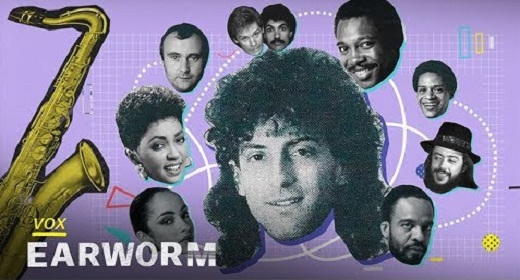 In another chapter of Vox’s excellent Earworm series (see Chapter 1 here and Chapter 2 here), Estelle Caswell explores the rise and fall of this modern day elevator music and asks if it’s worth reconsidering.

The undisputed star of smooth jazz has to be the “Songbird” himself, the frizzy-hair be-coifed Kenny G. (The only part of the video I took issue with is when one fan is quoted saying “he was the cool white boy.” Ma’am, all due respect, but Kenny G was never cool.) The man played alongside Clinton’s inauguration and once broke a world record by holding a note for 45 minutes. The smoothest of smooth jazz issued forth from his soprano sax and like it or not, his was a readily identifiable sound in a genre where nothing is supposed to stand out.

Earworm first traces the history of the form back to Grover Washington Jr., CTI Records, and other artists like Wes Montgomery. While Miles Davis was exploring difficult sonic textures, jazz headed into free improv territory, splitting from tonality in much the same split as befell classical music. What emerged was something closer to r’n’b and soul with improvised melodies over the top, or covers of popular pop hits from the ‘60s. This also could be seen as an evolution of jazz’s raiding of the Great American Songbook along with Broadway hits. If Coltrane could break “My Favorite Things” into cubism, surely there was a place for Wes Montgomery to riff over the groove of “Goin’ Out of My Head” by Little Anthony and the Imperials.

And from Montgomery we get to George Benson, silky smooth and undeniably funky. He even scat sang his solos at the same time as he played them on the guitar. His records went platinum which meant something in the days of rock’s ascendancy and jazz’s fall.

But as Earworm points out, Smooth Jazz only became a thing when marketing stepped in. As freeform stations were bought out by corporations, market research firms targeted audiences with focus groups. It was in one of those groups that a woman described the music like Benson and Bob James as “smooth jazz,” and the name stuck.  It’s fitting that the west coast was the birthplace in 1987 of the first “smooth jazz” station, KTWV in Los Angeles, 94.7 THE WAVE, home of all sorts of laid-back grooves since the very beginning of jazz and pop. Other stations would soon follow suit, reaching a height of popularity in 1994, when Kenny G won Best Adult Contemporary Artist at the American Music Awards. It was “smooth sounds for a rough world,” as one adman called it, but what it really was comfort music for office drones.

Ironically, the forces that put smooth jazz at the top were responsible for its fall, as new technology to measure radio ratings found it couldn’t pick out the music from the background sounds. By 2008 and the financial implosion, smooth jazz radios stations were on the decline and the great recession killed it off.

It’s fitting because smooth jazz was the soundtrack to a dream of capitalism, all the rough edges burnished away, blinkered aspirations made into melody. But when the dream melted for everybody, smooth jazz evaporated. At least with soft rock you got songs and tales of heartache.

However, it would not surprise me to see Smooth Jazz make a nostalgic, ironic-but-not comeback. If Japan’s City Pop, which trades in similar smooth textures, can speak to the disaffected youth about a deep, affluent wish that never came true, Chuck Mangione can’t be too far behind. And it just feels. so. good.

P.S. If you have a hankerin’ to hear some smoothness right now, Vox has a Spotify playlist for what ails you.