by Sukhbir Cheema: Meet Pua Lay Peng, a 46-year-old chemist from the quiet town of Jenjarom in Malaysia… 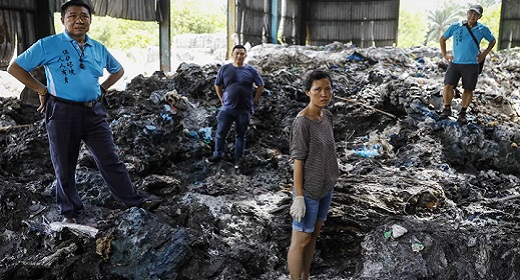 Located some 23km away from Malaysia’s federal administrative centre, Putrajaya, it has a huge problem: Illegal plastic recycling factories.

According to the Huffington Post, these factories had cropped up in Southeast Asian countries such as Thailand, Vietnam and Malaysia following China’s decision to close its doors to importing waste from other nations in late 2017.

With the presence of these illegal factories, believed to be owned by the Chinese, residents of the quiet town have regularly fallen ill. Respiratory issues, headaches, skin problems and having trouble sleeping were some of the ailments which have been afflicting the townsfolk.

Then there was also a lingering stench. That of burnt plastic.

Pua, who linked these with the disappearance of butterflies and insects in her town, discovered the presence of plastic waste being dumped in several parts of the town. These burnt piles were found primarily in neighborhood corners and in plantations.

Together with three others consisting of C.K. Lee a lawyer, Tan Ching Hin, a former village head and a stay-at-home mom, the group got together to discover more locations where such chemical laced wastes were discarded.

The group found suspicious facilities – which were used to recycle plastic scraps – around their town. Nearby, tests conducted on the rivers turned out positive: They contained toxic chemicals.

Sadly, the authorities were dismissive of their findings in February 2018. Using the help of local journalists and non-profit organizations, the group managed to bring awareness on what was taking place in their town.

Burning these plastics releases dangerous toxic chemicals such as hydrochloric acid and dioxins which can damage the nervous system and cause heart and respiratory ailments.

To the group’s horror, these plastics were imported from the U.S., the U.K. and Australia. The dumped plastics were those which could not be recycled nor broken down anymore.

“If we kept quiet, we’d turn into a cancer village. These illegal factories would just keep doubling, doubling. And what will happen next? It’ll be a disaster for my country? So I balance that in my mind,” Pua says.

However, it has not been easy for the group as they have been met with death threats.

“I received messages like, ‘Don’t act so aggressively or we will come after you. I was scared,” Pua reveals, adding that a bounty of US$25,000 had also been placed on her head.

Yeo who has been instrumental in closing down many of these illegal factories, however, needs to up her game even more because every time they get closed down, the factories relocate elsewhere.

The struggle for the group has not ended. In fact, it has just begun.