What The Japanese Can Teach Us About Super-Ageing Gracefully

by Johanna Airth: Japan has one of the oldest populations in the world, but some of the country’s elderly aren’t slowing down… 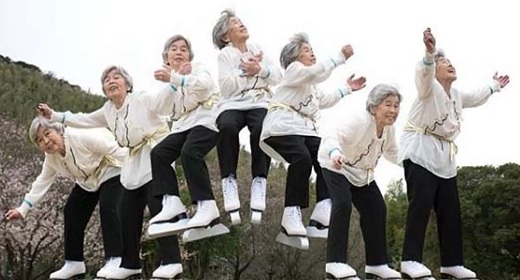 Mieko Nagaoka first started swimming in her 80s to help recover from a knee injury sustained while practicing Noh, a traditional Japanese theatre. When she was 100, Nagaoka published her book entitled: “I’m 100 years old and the world’s best active swimmer”, before going on to set the first world record for her age group, swimming 1,500m in a 25m pool. At 105 years old, she still enters Masters competitions and currently holds 18 world records.

Then in September 2019, to much media fanfare, Nagaoka announced her retirement before entering her last competition, the Japan Masters held in Fukuoka. She attempted to set the world’s first record in the 50m backstroke in the 105-109 age group but, was forced to retire from the race. She left the poolside smiling to the applause of her fans.

Nagaoka will soon be relocating to live with her son in Yokohama and will retire from her amazing swimming career of 25 years. Her son Hiroyuki (79), who helped Nagaoka in her training told The Asahi Shinbun, “We have had blissful happiness swimming together until this age. There must be no other examples like us in the world.”

Another beloved centurion was Master class sprinter Hidekichi Miyazaki, who passed away in 2019 at 108 years old. Nicknamed “Golden Bolt” after the Olympic Gold medalist Usain Bolt, Miyazaki made headlines at 105 years old when he set the world’s first record for 100m sprint for the 105-and-over age category. Asked about his performance he replied, “I’m not happy with the time,” echoing the competitive mentality that drives Nagaoka to swim. 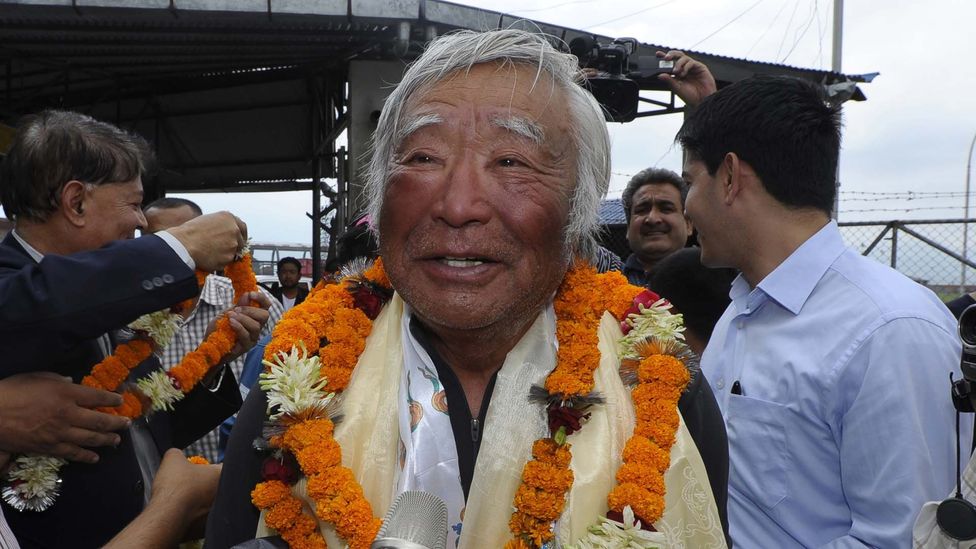 We are quick to attribute good eating habits and exercise as keys to ageing gracefully. But what about the question of never losing the competitive spirit? A healthy rivalry, whether against a near-aged competitor or your younger self, combined with the hope of achievement, seem to play an important part.

At 86, alpinist and professional skier Miura, is another senior citizen who has celebrity-like status both in and out of Japan. In his 40s he attempted to ski down Mount Everest with a parachute on his back, a practice known as speed riding, to decelerate his descent. His feat was documented in the film “The man who skied down Everest”, which won an Academy Award for best documentary in 1975.

At 70 years old, he returned to Everest and became the oldest person in the world to summit. That record was broken when Miura again made the climb at 75, and then again at the age of 80. In early 2019, Miura attempted to climb, then ski down Aconcagua, the highest peak in South America. At Plaza Colera located around 6,000m above sea level, Miura was ordered to stop by his doctor, who had accompanied him, due to concerns about the risk of heart failure triggered by the high altitude. Once back in Japan, Miura explained during a press conference that he decided to accept the doctor’s orders because he still hopes for another attempt. He is now working towards his goal to summit Everest again at 90.

The list of active seniors in Japan can go on: 83-year-old marathon runner, Michiharu Shimojo, and Seichi Sano who took up surfing at the age of 80, “on a whim,” are just some of the octogenarians who put many of us to shame. What is their secret? Is it the competitive nature of extreme sporting, or something fundamental?

Ageing societies are becoming a global phenomenon. According to data collected by the United Nations’ World Population Prospects: the 2019 Revision, by 2050 the number of persons aged 80 and above is projected to triple, going from 143 million to 426 million.

Japan’s age demographics have been shifting for decades, and now the country has entered a “super-aged” society, with senior citizens aged 65 and above accounting for more than 28% of its population. Former Bank of Japan Chairman Masaaki Shirakawa concluded at a 2018 news conference on “Japanification,” that measures to increase the price of goods or the country’s GDP should not come from economic measures but from new social structures that take low fertility rates and the ageing demographics into consideration.

With many countries in Europe already experiencing an ageing society, and South Korea, China and Singapore following closely behind, eyes will turn to Japan in order to get ahead of stale policies that were made for a younger populous. New social, political and legislative changes are needed to address the decline in economic productivity, due to the ageing labour force, and mounting health care and pension costs. Most importantly, yet often overlooked, countries will have to re-think how to protect the mental happiness of its ageing citizens.

Japan is already uniquely poised to endow its citizens with a super-charged senior mentality – more than the fear of death, a fear of being a burden on society and family is universal in the culture. This idea of meiwaku, or “being a nuisance,” is hard-wired from an early age, and society functions on this guilt-laden philosophy. A friend’s offer to help is often rebuked because it would be thought meiwaku to accept. Only when the offer is made again is it polite to accept. However, in the case of the elderly, “being old” is a condition that can’t be helped. The no-meiwaku attitude then becomes a stubborn effort to remain quite independent, both financially and mentally.

This fear manifests as a strong incentive to keep working as a cog in the social wheel for as long as possible. According to the Cabinet Office’s Annual Report On The Aging Society, a staggering 70% of people aged 60-69, and about 50% of people aged 70 and above are either working or engaged in volunteer activities, community activities and hobbies. To account for this shift, 70% of companies have extended the retirement age, influencing a higher employment rate for seniors throughout the past decade.

There has been evidence that muscles can continue to strengthen, even in old age, which is contrary to what we believed in – Yuko Oguma

Having a social life that doesn’t rely on young family members is a major factor in starting hobbies. Aside from active sports such as swimming (a very popular sport with the senior community due to its rehabilitative benefits), elders are engaged in various activities from traditional calligraphy, flower arrangement, sewing, to taking up musical instruments and dancing.

The same report also shows a higher cognitive ability in the Japanese seniors compared to the rest of the world. According to Yuko Oguma, associate professor in Health Management Research at the Keio Sports Medicine Research Center, athletic ability has been linked to higher cognitive ability. That is not to say that every octogenarian should climb up a mountain.

“Light exercise, whether stretching, walking daily, working out at the local community center, is effective,” says Oguma. “Not only for cognitive functions but from a social aspect as well. Compared to 10 years ago, the Japanese seniors are healthier, and have a higher quality of living. This is thought to be a combination of better medical aid and understanding of our bodies. Recently, there has been evidence that muscles can continue to strengthen, even in old age, which is contrary to what we believed in. We believed muscles deteriorate with age, but research is finding that not only can we still train and strengthen our muscles, but that it is important.”

Kimiko Nishimoto is a 90-year-old “Insta-gran” with over 220,000 Instagram followers (Credit: Getty Images)

Oguma also believes, although she says it is hard to prove, that having so many peers within the society that look out for one another, is an understated factor in ageing gracefully. “Often it is the senior citizens themselves that put together programs within the community. They work among themselves to provide activities, to be more fit or to be included socially. It is this proactiveness that strengthens them.”

Japan has some superstars among the “super-aged”, that are helping to take away the stigma of age

If community building is an important facet to ageing, then bringing about cross-generational and cross-cultural interaction is another focus area for organisations. The senior citizens volunteer with local school events. At the national zoo, there are volunteer groups that aid tourists with the park map. Boosting internet literacy in the ageing population is another such solution.

Which brings us to Kimiko Nishimoto, the 90-year-old “Insta-gran,” who boasts over 220,000 Instagram followers. If the incredible athletes mentioned above are testaments to the mind and body, then she is of the heart and spirit. Nishimoto started attending photography lessons at school directed by her son, then fell in love with the shutter sound of a camera. Her quirky frames and clothing capture her surprising sense of humour. She plays with social norms by poking fun at her “oldness”: a satirical frame of herself in an automobile accident, an image of her riding her scooter at hyper speed, a self-portrait in a garbage bag. As she, like many other senior citizens, lives on her own, her son bought her the robot “Pepper” as a friend. She jokes that she scolds him for being too loud but also dresses him up in ribbons to pose for the camera.

Japan has some superstars among the “super-aged,” who are helping to take away the stigma of age. Now, Japanese policy makers, companies and communities are focusing more and more on improving the quality of life of their senior citizens. It is their achievements, perseverance and general outlook that we should look upon for inspiration.

Perhaps, then, the key to ageing gracefully is simply to embrace the no meiwaku mentality… While the Japanese diet has certainly been lauded for keeping the population healthy, there has to be more to these seniors’ secrets. When Nishimoto was asked about her diet, she admitted to drinking bourbon in a tall glass and smoking cigarettes daily. So no, simply living on a healthy diet is not the only key to being super-aged.

Perhaps the answer is right there, in the joy she shares on her Instagram feed.