Why Are Teens Oblivious To The Pile Of Dirty Clothes On The Bedroom Floor?

by Lyndsey Layton: Teenagers always have been a mystery puzzling their parents… 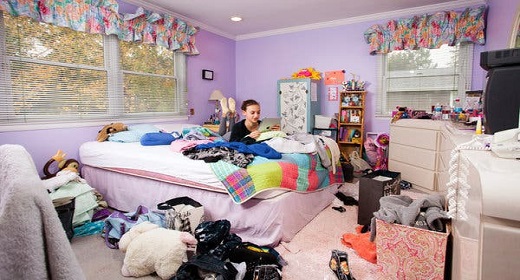 What was he thinking when he drove down a one-way street the wrong way just for kicks? Why is she oblivious to the heap of clothes piled on the bedroom floor for two weeks?

Frances Jensen, a neuroscientist and single mother of two boys, pondered these questions and many more, then delved into the emerging science of the adolescent brain. She came out with provocative new insights for parents, educators, public policymakers and teens themselves.

“I thought, I’ve got the skill set for this. I’m a parent, a neurologist and I care for teen patients,” said Jensen, who was in Washington this week for the annual meeting of the American Academy of Neurology. “And it was all in the scientific journals not available to the public, locked away in the ivory tower.”

As she pored through the scientific studies, she shared her findings with other parents. One thing led to another, and soon Jensen was giving talks for parents and students called “Teen Brain 101.”

The response from befuddled parents was huge, she said.

“They would say, ‘So that’s why it’s happening. Thank goodness someone explained what that was,’ ” she said. “The effect was big for people and for me, too.”

She detailed her discoveries in “The Teenage Brain,” co-written with Amy Ellis Nutt, a reporter at the Newark Star Ledger who later joined The Washington Post as a health and science reporter. Published earlier this year, the book is a bestseller.

Brain science developed during the past dozen years obliterates some long-held assumptions about teenagers, including the belief that their erratic, often risky and rebellious behavior is driven by hormones.

In teens, that means the prefrontal cortex — which makes judgments, calculates risks and controls impulses — is not yet fully connected to the region of the brain that seeks pleasure and reward. Jensen puts it this way: “It’s like a Ferrari without brakes.”

That’s a problem because the teen brain also is more susceptible to addiction than the adult brain, said Jensen, who chairs the neurology department at the University of Pennsylvania’s Perelman School of Medicine.

“They get addicted stronger, deeper and faster than adults, and the effects last longer,” she said. “If they get high during the weekend, the brain” is affected for days.

Alcohol and marijuana temporarily sedate the adult brain, but, she said, they can permanently damage the teen brain. That’s a concern as an increasing number of states decriminalize marijuana, Jensen said.

“It’s just so easy to get these things,” she said. “It’s so available. And there are parents who have been told it’s fine, it’s harmless. But it blocks an important step” in brain development.

Although teens can do irreversible damage to their brains, they also can make amazing improvements.

Once thought to be set in childhood, IQ is fluid during the teenage years, Jensen said. Studies show that during adolescence, IQ will increase in a third of teenagers, decrease in a third and remain stable in another third, she said.

“The idea that IQ is malleable suggests that teenage years are extremely important in terms of the right kind of brain stimulation,” Jensen said. “It’s a time of working on strengths while trying to improve weaknesses. How you treat your brain in the teen years will define your base line for the rest of your life.”

An enriched environment, engaging after-school activities and a robust educational setting are especially important during teen years, she said.

It also means there is hope for the late bloomer.

“If you’re not a scholar by 14, a lot of educational systems track you, and if you’re not at the top, you go into vocational training,” she said. “But if you’re getting C’s and D’s, that may not be your destiny — you’re just in the wrong place. The U.S. educational system is quite lenient in this regard. Late bloomers exist, and you can see it, like people who transfer from a community college to a four-year university.”

Understanding the teenage brain made Jensen a more patient mother to Will, 24, and Andrew, 27. “I stayed connected to them,” she said. “That was probably the most important thing. I’d count to 10 and stay connected. If you alienate your kids, you’ll lose them.”

“It’s a tough time in life,” Jensen said. “You don’t know what your identity is, but you’re at a huge advantage to work on strengths and weaknesses. And, by the way, you can change your IQ. Similarly, if you shoplift and do something dumb because someone dared you and you get caught, it doesn’t have to define your life.”