by Nick Polizzi: For thousands of years, the many herbs and spices of the Far East have brought an aromatic and flavorful punch to Indian cuisine… 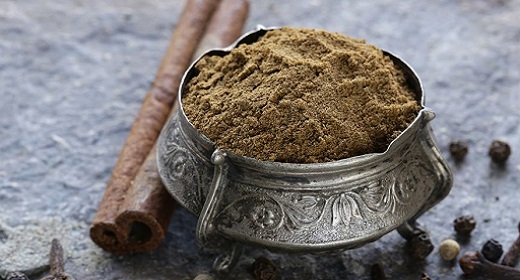 In more recent years however, science has proven that these spices also possess a host of medicinal qualities.

One particular spice blend sits on the shelves of many kitchens across South Asia, revered for its slight sweet and savory character, as well as its abundance of health benefits…

At my house, garam masala is our go-to when we want to add an Indian dimension to our dishes. It’s a blend of spices that adds incredible depth and complexity to food.

In Hindi, garam means hot, and masala means spices. This warm and pungent spice blend originated in the north of India, helping to warm bellies and lift moods during chilly winters.

Its popularity quickly saw it become a staple throughout the country, with different regions adapting it to suit their unique culinary character. In the north, it tends to be sweet and pungent, while in the far reaches of the south, hot red chilies are incorporated into the blend.

Several of the diverse spices present in the mix, like cinnamon and black pepper, support a healthy immune system. With winter on the horizon, this powerhouse blend can help keep colds, flu, and other bugs at bay. Garam masala is also chock-full of antioxidants, which further boosts immunity, and can reduce inflammation.

According to Ayurvedic medicine, the spices in garam masala are warming, increasing the metabolism and aiding digestion. Cloves and cumin keep indigestion at bay and prevent acid build-up in the gut, while black pepper is a natural metabolism booster.

Preparing your own homemade garam masala blend allows you to capture the perfect balance of all the flavors present. You can tweak the levels of warmth, sweetness, heat and spiciness to suit your own taste buds.

Here’s an easy recipe to try at home!

*Note: For a more pungent and flavorful blend, you can dry roast the cumin, coriander, cardamom and black peppercorns, then grind them in a coffee or spice grinder.

Garam masala is unbelievably versatile — add a dash to soups, curries, stews, dahls, and legume or vegetable-based dishes. If you’re a spice fiend like me, you can even experiment with adding it to stir fries. It goes great in homemade samosas too!

As we move deeper into fall, I find myself craving spicier, more robust meals, and garam masala packs a punchy flavor hit every time.

Give it a try and let us know what you think!