A Plan For ‘Lithium Valley’ Begins To Take Shape

by Katie Fehrenbacher: While California is accelerating toward an electric vehicle future — in part thanks to the new gas car sales ban — it’s also got a potentially massive, and still totally untapped, EV resource in its backyard… 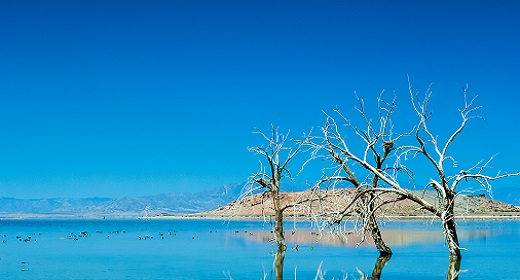 Is that opportunity finally starting to get some attention?

That would be the valuable lithium that lies beneath the ground in the geothermal brines of the Salton Sea. If you haven’t heard of it, the Salton Sea is a 350-square-mile, shrinking lake that’s a looming ecological disaster located a couple dozen miles south of Joshua Tree National Park.

Lithium is one of a couple of critical ingredients that make up today’s lithium-ion batteries, which power electric cars, as well as our laptops and cell phones. A group of investors, policymakers, startups and energy providers are hoping to build a domestic battery manufacturing, mining and innovation hub around the Salton Sea’s lithium, coined “Lithium Valley.”

According to a new report out last week from the nonprofit accelerator group New Energy Nexus, a domestic battery supply chain anchored at the Salton Sea could generate billions of dollars and thousands of jobs for the disadvantaged Imperial Valley. These types of local jobs and resources are even more important in the wake of one of the state’s most severe COVID-19 outbreaks this summer.

Such a hub also could help the U.S. remain globally competitive with EV battery manufacturing. Many of the world’s batteries are made in Asia, and most of the world’s lithium is mined from Chile, Australia, Argentina and China.

Such a hub also could help the U.S. remain globally competitive with EV battery manufacturing.

The Salton Sea region is unique in that some researchers estimate it contains enough lithium in the geothermal brines that it could supply a third of the world’s current lithium demand. The lithium also could be processed in tandem with developing geothermal power plants that could generate significant clean energy and local jobs.

For years, power companies and startups alike have tried to tap into the hidden wealth beneath the surface of the Salton Sea region. In 2014, I visited the area to interview a now-defunct startup called Simbol Materials that was trying to mine and process the “white gold.” Last year at our annual VERGE 19 conference, we featured a breakout session on Lithium Valley with New Energy Nexus, Berkshire Hathaway Energy, the California Energy Commission and startup Lilac Solutions.

But Lithium Valley finally seems to be starting to gain some momentum. Last month, California Gov. Gavin Newsom signed a bill that instructs the CEC to create a commission that explores and expands the emerging lithium recovery industry.

Lithium extraction is in need of reinvention. Most lithium that comes from brines is extracted from the ground via large evaporation ponds, which are inefficient, slow and environmentally problematic. Because the Salton Sea is essentially undeveloped, new technologies such as Lilac’s can have space there to pilot projects and contribute to what the industry hopes will be a burgeoning innovation hub.

We’ll be watching this space — is it finally time for Lithium Valley to take shape?