Anatomy 101: Can You Safely Jump Back To Plank?

by Robyn Capobianco:  Learn what muscles are activated when you jump back to Chaturanga or Plank Pose, and how to do it safely… 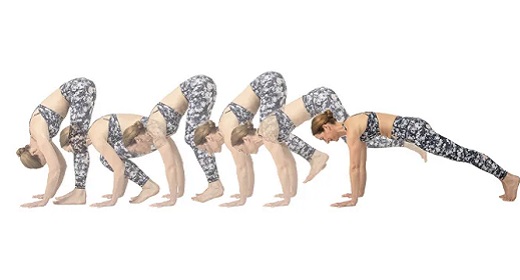 At some point, most yogis will be cautioned during Sun Salutations or vinyasas to “never jump back to Plank Pose—only to Chaturanga Dandasana (Four-Limbed Staff Pose). But this warning doesn’t exist in the fitness world, where jumping back to Plank is part of one of the most popular bodyweight exercises: the burpee.

This basic exercise is simple— start standing; jump straight up; bend forward, and place your hands on the ground; jump back to Plank, then hop your feet to your hands, and repeat. Sound familiar? Eliminate the initial vertical jump, add a backbend (Cobra or Upward-Facing Dog) and Down Dog, and you have a classic Sun Salutation.

According to Mark Singleton’s book Yoga Body, it was Tirumalai Krishnamacharya—the grandfather of Western yoga—who borrowed the jumpback to Chaturanga from Western gymnastics in the 1930s while he was developing the system that became Ashtanga Yoga. With most modern forms of vinyasa and Power Yoga springing from the Ashtanga lineage, jumping back to Chaturanga became widespread and is now included in most vigorous yoga classes in the West. But given the shoulder and wrist injuries that are emerging lately, it seems like a good idea to revisit a few commonly circulated misconceptions about the biomechanics of the transition.

First, let’s look at one myth you’ve likely heard: Jumping to Plank is jarring on your joints, forcing your wrists, elbows, and shoulders to absorb shock that would otherwise be dispersed by bending the elbows into Chaturanga. This misconception seems to be based on the false premise that because Plank Pose is a bone-stacked position, the ligaments and tendons within your wrists, elbows, and shoulders must absorb more impact on the landing than they would in Chaturanga.

However, a 2011 study in the Journal of Bodywork and Movement Therapies showed that the muscles around your wrists, elbows, and shoulders have to produce more torque (a rotational force) in the Chaturanga position (with bent arms) than in Plank Pose (with straight arms). This finding also holds true for jumping back to these poses. Think about it: When you jump back to Plank, your shoulders stay stacked above your wrists, and your elbows stay relatively extended or straight, which means the muscles around your elbows don’t need to produce as much torque as they would for a Chaturanga landing. Instead, the larger (and in most bodies, stronger)muscles around your shoulders and back control the movement, which makes you less susceptible to injury in your shoulders, elbows, and wrists.

Another misconception about landing in Plank Pose is that the bone-stacked position leads to ligament strain. Strain is simply a change in length from an original state—a.k.a. a stretch. So, when you stretch your body, you experience strain, which means strain itself is not synonymous with injury.

Finally, you’ve also likely heard the myth that jumping back to Plank Pose is harder on your lower back than landing in Chaturanga. It’s true that if your core isn’t engaged when jumping back to either Plank or Chaturanga, your lower back can sag. This, in turn, can compress the facet joints—the points of articulation between the vertebrae that allow your spine to flex and extend—and lead to bone degeneration if done repeatedly over time.

On the flip side, if your back is over-rounded on either landing, your abdominal muscles can create too much torque on your vertebrae, which can lead to compression in the discs, resulting in injury. Prevent either scenario by jumping back to either pose with an engaged core, which will keep your spine neutral.

When we weren’t able to find scientific research examining the biomechanical differences between both transitions, we headed to the Applied Biomechanics Lab at the University of Colorado, Boulder, to investigate. The lab has a 10-camera motion-capture system and special plates that record ground reaction force—the force the ground exerts onto the body in reaction to body weight exerting force onto the ground.

We placed sensors on a yogi’s hands and lower back as reference points to determine where the center of gravity moved during these two transitions. The verdict: Peak vertical ground reaction force—the highest ground reaction force in the vertical direction—was equal for both transitions (about 1.5 times body weight). That means neither landing can actually be classified as more jarring.

In fact, the peak vertical ground reaction force in both jumpbacks was closer to that of walking (1.3 times body weight) than running (2.5 times body weight). That means that with the required strength and proper form, jumping back to either Plank Pose or Chaturanga produces only a slightly higher impact on the body than walking.

Perhaps our most important finding was that the center of gravity stayed closer to the hips in the jumpback to Plank and moved about four inches closer to the head in the jumpback to Chaturanga. That means, when combined with ground reaction force, more body weight has to be supported by the arms in the jumpback to Chaturanga, which increases the amount of torque your shoulders, elbows, and wrists must produce in order to land and maintain safe joint positioning in Chaturanga. The more muscular force required, the more opportunity for injury—particularly at the joints if the muscles around them can’t produce enough force to land or hold Chaturanga.

Wondering what muscles are activated when you jump back to Chaturanga or Plank Pose? Here they are.

The Jumpback to Chaturanga vs. Plank

Jumping back to Chaturanga resulted in a ground reaction force at the upper body that was 10 pounds more than that of jumping back to Plank (which amounts to 7 percent of the model’s body weight).

Though jumping back to Plank was easier on the shoulders and wrists, it was slightly harder on the feet by about 8 additional pounds of ground reaction force— 5 percent of the model’s body weight.

So Which Jumpbacks Should You Practice?

Now that you understand the biomechanics of both jumpbacks, you can make informed choices about the best transition for addressing your needs and goals—and, if you’re a teacher, those of your students. Here are some recommended guidelines:

Step back to Plank and lower through Chaturanga to the ground if you’re looking for the option with the least potential for injury. It’s a great choice for beginners and yogis with sensitive wrists, elbows, shoulders, lower backs, or poor foot mobility.

Jump back to Chaturanga if you can hold the pose with good form (with your upper back muscles engaged, no sagging in your low back or belly, and your shoulders in line with your elbows) and can also successfully jump back to Plank and lower from Plank to Chaturanga without pain. When you practice this, keep your core and shoulders engaged—and stop if you feel any pain or discomfort in your joints.