David Welch: One last question. How do we get society to recognize, embrace and incorporate the divine feminine?

Right now…not just us individually, but the whole social structure is not in balance. It’s too masculine. 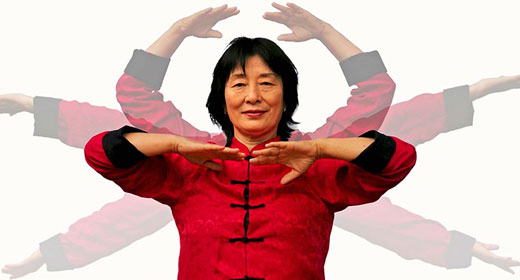 Fan Xiulan: Your words are very advanced. So…we have a young generation…and the older people, so they can have a very good soul. So, their soul can go to a good place. So, we are trying to help them not be afraid of death and let them know where their soul will go after death, so as to release their pain…release their stress. It’s not what I do. I don’t do anything. It’s themselves. Once they start this process, they will find out by themselves. For example, as long as there is one person in a big room with very high energy, then the love, the feeling, will affect all the people in the room. So that’s why, for example, in the U.S. and in other countries, people are starting to practice Qigong…this is a kind of silent Qigong…meditation. So, they are doing that in Norway…it’s a huge energy. It’s 600 people. It’s a huge energy. Even I think it will affect half of Europe…the energy. So, you cannot see them but you should feel them. 600 people may get huge energy results from the universe. So, it may affect a lot. There is a famous woman monk, Mother Teresa…once she enters a room, everybody in the room becomes very happy. Everyone feels that…even the soul gets clean.

DAVID: So if I, or any individual, want to affect the whole world, then we need to start with ourselves and to connect with that universe? And as we awaken, it affects all of humanity?

Fan Xiulan: Why you got throat cancer is because the energy level of you at that time was below 200.

DAVID: There is some kind of scale?

So, when you practice Qigong, it’s like you become the sun. You know once the sun rises up and covers all the stuff…and everything, like moisture stuff will be gone. So Qigong is very important for everyone.

DAVID: Would you be willing to share some of your personal experiences about your own Awakening?

Fan Xiulan: Yes, that’s fine. Before I turned 36, I was completely just focused on myself. Everything is me, me, me. It’s like I must be the best. Because of that, I only focused on me. Myself. I spent a lot of energy on that. I got angry about competition often. I became very angry. So, my energy level came down at that time. Then, the doctors saw I had cancer in the blood. At that time, I was in a smaller city. And they said, “we cannot treat that…you must go to Bejing.” The capitol. So, I changed the environment. And someone told me you can practice Qigong and some miracles may happen. So I was exactly like you…listening to someone talking about Qigong.

And I started to remember, that my grandfather, my mom, all taught me a lot of Qigong. But at that time, I ignored them. And then I started thinking, why not start practicing Qigong? Once I started, seven days without sleep. It’s not that I wanted not to sleep for seven days. It’s because of the energy I got from the universe. And I saw Quan Yin. I heard a lot of sounds from the universe. I could see a lot of things that normal people cannot see. It’s just seven days. I opened my eyes to the universe. I could see other people’s problems. I was also afraid of that at the time. Why can I do all of this? So I was also afraid of that.

Because of this, I became kind of famous and they invited me to Japan. And at that time, Fuji Television wanted to prove if it was true or not. And they interviewed me. On one side, there was a journalist and me, and on the other, a doctor with the examination results…so I cannot see the examination results of the people. But I knew the problems they had. So, I would just sit with the person, like we are doing now and I tell what happened, even twenty years ago and what are the problems and what is the reasons for that. And after that, they immediately go to verify it’s true…it’s 100% true. So Fuji Television media made DVD, so I can give you as a present. So, you can watch that.

DAVID: Before this seven day process, did you do any Western medical? Chemo-Radiation? Western stuff?

Fan Xiulan: Examination of the blood. Take some medicine.

Fan Xiulan: It was just simple medicine. Western. It’s the medicine you need to take when they look at your blood. They took fluid from my spine. And after seven days, when I went back to the hospital, all the sickness was gone. So after that, I made a promise that for the rest of my life, I would help the people…to help them realize that they can treat themselves. Then they assigned me a special place in Beijing, and I started a course. Every class had at least 100 people. It’s not me who asked them to come. It’s those that have the problem of a serious disease that came. Some of them were very high level people, like prime-minister…factory workers…all of them. Then I became famous.

I met Niko At the World Congress of Qigong. And he asked if I could come to Sweden. That’s how I came to Sweden. After I arrived in Sweden, we collaborated with the University. Only for older people. So, it’s a university, but the students are older people. At the beginning, there were only six students. And it grew to 100,000. Then Denmark, Norway, U.S., Hawaii, New York, Brazil. All have lectures there. I only work as a teacher…to train the people in their country. To let them become a teacher, so they can affect others. It’s been twenty three years since the start.

DAVID: So what I’m hearing is…that it wasn’t traditional medicine that helped cure her. It was her work with Qigong, which connected her individual consciousness with the universal consciousness and that is what healed her.

Fan Xiulan: Yes. Every person is like that. But we also tell them what kind of food they need to eat. Healthy.

Fan Xiulan: Vegetarian is good, but you still need to balance vitamins…and food also has yin…yang. For instance, party says that his hands and feet are cold. So I tell party you need to eat something like Ginger. So different people…I will tell different foods they need to eat.

DAVID: In traditional Chinese medicine, we look at the tongue…the color. I know you are intuitive, but is that how you know specifically what he needs, or what I need?

Fan Xiulan: Yes, still you need to check. We need to check your face, your color. This is just to check “the house.” We know how to repair it, but the more important thing is to know the reason behind it. It’s because the channels are blocked. If you are not leaving Sweden before Sunday, I am having a course.

DAVID: I have to leave tomorrow. So, Qigong is working with energy…the same meridians used in acupuncture…you can tell there is a block. So the acupuncture is to go to that specific place where the block is. Is that right?

Fan Xiulan: You should pay attention. The nutrients you get are not enough. The chi you have is not enough to reach the end. In your body there is a lot of cold stuff and also some poison. You can come to Sweden again or also, I will visit the U.S. Good news, my granddaughter will attend a fencing competition in Los Angeles. No…San Francisco. So, we go for lunch now.

Fan Xiulan: I think it’s from Chinese Medicine. From Taoism.

DAVID: I have a Chinese Acupuncturist…Chinese medicine herbologist, who works with me. Can you contact him and speak about me?

Fan Xiulan: Is it Chinese?

DAVID: Yes. He’s a Chinese medical doctor, but he is also an Acupuncture and Herbologist. If I’m not getting chi all the way out to my fingers maybe she could let him know.

Fan Xiulan: I’m so glad to meet you. I also hope that through your website, more people can get to know Qigong. Probably, you can put the videos on your website.

Micky: What is your personal experience in being an awake being?

Fan Xiulan: So, sometimes my experience is that I can feel…in stillness. I can ask a question in meditation. And sometimes, it’s Jesus…sometimes, it’s Buddha that will come to answer my question. Everyone can do that. Once you close the left side of your brain, then it’s easy. I have articles. Maybe you can read them. It’s more than just Chinese Medicine. It’s to wake up people.

Fan Xiulan: I already know your web site. Once you are sitting here, I can see your web site. Because you have a lot of energies behind you. He (Mickey) is one of my best friends, that supports me.

DAVID: He supports me too.

Fan Xiulan: His soul is so shiny. He wants to share all the good stuff to help other people. So, I am also very honored to meet you today.

DAVID: And I’m very honored to meet you.

Fan Xiulan: We can discuss together what we can do for human beings to wake up.

David Welch: is the founder and CEO of Awaken Global Media and Chief Editor of AWAKEN.com.   He is one of the Producers of the award-winning movie “Peaceful Warrior” and a member of the Directors Guild of America and the Screen Actors Guild. David is a master practitioner of Neuro-linguistic programming, a certified Kundalini Yoga instructor and has a continuous, committed and daily yoga, meditation and Qigong