David Welch: Can you share a little bit about yourself and what you’ve been going through. 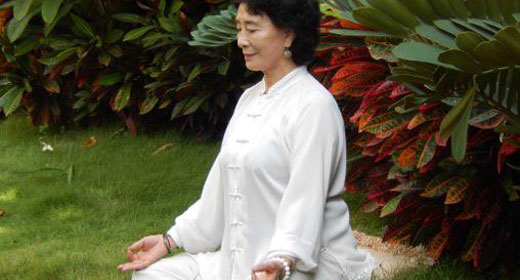 Fan Xiulan History (from translator): So from what I’ve heard, she got introduced to Qigong and herbal medicine through her grandmother. There has been a long tradition in her family of Chinese medicine. She has been practicing the Qigong methods during her childhood. Then, she went to university and focused on her career. The Chinese medicine fell away a little bit. Then she got an illness in her blood. Leukemia. The doctors said they needed to book an appointment for an operation. Then she set out to practice Qigong and meditate. She practiced a particular Qigong sequence for seven days straight with out sleeping and when she came back to the doctors, they were stunned that she no longer needed the operations. And she felt this calling to help others and spread these gifts. She has been an important person in China…having a “health home,” where she has treated thousands of people. They have been coming to her place where she has been practicing Qigong and eating healthy and taking walks in nature. The method has proven to be one of the most effective for certain diseases. We are very fortunate to have Fan Xiulan in Sweden. She has helped many people here, as well.

XIULAN: And a little about you David.

DAVID: My mission is to help awaken the planet through enlightened media. I am one of the producers of  the award winning movie Peaceful Warrior, which is about someone’s awakening. Then I got really stuck in my head and manifested stage four throat and neck cancer. Nothing like death sitting on your left shoulder to put you back in the present moment. So now, I run the Awaken web-site as a resource for people that are Awakening to the fact that they are also powerful and amazing spiritual beings.

XIULAN: Focused on the present.

DAVID: Spiritual beings focused on the present.  How is Qigong a method and a practice to help awaken and deepen the experience of ourselves as spiritual beings?

XIULAN: That is a very good question. Qigong helps to address your body, but more important, it helps in the level of the soul. Why do people get cancer? It’s because the body has some problem, but essentially there is some problem in the soul. The soul gets polluted. It is scientifically proven that inside every person’s body there is a transparent part. And that part in Chinese medicine, it’s “meridians.” So, for example, if you are highly stressed or you ate something not good, it will “block” your meridians. So then, it will cause some diseases, like cancer. So far, scientifically speaking, there is no treatment to remove this. So right now, all the doctors use the method of “killing” the cancer cells. But at the same time it also kills all the normal cells.

But this cannot solve the problem. On the other hand, some people don’t have to take any medicine, but they just have a very positive power. Very happy and think positive and then eventually, they get well. I have a friend who has this problem since he was five years old, but it’s a disease, not cancer. After three times, acupuncture, he feels much better. What I did was just to make him happy, release all the stress and invoke the chi. This is just temporary. If we keep doing acupuncture it will help, but once we stopped acupuncture, it will come back. Probably one month, three months, one year. So he must know how to help himself. So this medicine, Qigong, is the same as you taking acupuncture. Same effect. Meridians. For example, if you cut the body, you cannot see that. This is just the channel of the soul. So, once the channel is blocked, you will get all kinds of diseases. So, this is like a channel between the universe. So, it’s like your soul is connected with the universe. And through these channels, it connects throughout your body. So you take the power directly from the universe.

DAVID: Yes, I noticed that Fan Xiulan was motioning with her hands that the universe was coming down through the crown Chakra and then down into the body.

XIULAN: Whether you do Qigong or not, the body works like that. Why do adults get serious disease while the child doesn’t, for the most part? Because the channel is clean. Gets the energy all of the time from the universe. So, Qigong is, whenever you get problems, diseases, you use Qigong to get this power from the universe, so that it cleans your channels. For instance, this gesture is to ask for the power from the universe. You must put your mind on that.

DAVID: What I’m observing right now is a hand. My hand is up and my four-fingers are pointing up to the universe and my thumb is wrapping into my palm. And this helps channel the energy into my body.

XIULAN: But the most important is the mind. You must put the mind on that.

DAVID: Elaborate on that more… Is it intent? I intend to have this energy come down.

XIULAN: Om. There is one vowel in Buddha. Om is the all sound. Om is to open. So you open what you want to get the energy from. So you can do the sound and the gesture and open your mind to think….

DAVID: That is the thumb facing you rather than facing away from you.

XIULAN: So all this, this is kind of a connector.

DAVID: When I do this I’m going to chant this out loud?

XIULAN: Yes. So body, sound and the mind…together. So, it’s like you are using a telephone to send out a message. And then, type in the message I want to send to you. And then, press send and you will get a message. It’s the same thing. You use all these three things combined. Then you will get the energy. But, your mind can do it seven times faster than this. It’s very fast.

DAVID: What I’m starting to get…what we are interested in, is, “who are we when we are awake?” And, what I’m hearing is this, “Qigong process opens me up to the universe and now when I’m in contact with the universe, I am awake as a spiritual being.”

XIULAN: If you forget about all the knowledge you have and all the experiences you have. So, actually, you completely shut down yourself. Then you will get a peaceful mind. Then you will see clearly where you come from and who you are. But, you must forget everything that you know. Forget about the knowledge you have. If you close the left part of your brain…in the right part of your brain there will be a peaceful mind where you can see clearly where you come from and who you are. So, the awakened is not the awakened body, it’s the awakened soul. So, I think your web site is so good. Great. Fantastic. People now only focus on money, on women, on power, but they forget the soul. Forget where they come from and who they are. They try hard to work and to think, but they forget the original soul.

DAVID: Also, what I’m getting is, the body…rather than being a hindrance, is actually a help in awakening. So, Qigong…by bringing this energy down into the body, is actually helping me awaken, as a spiritual being.

XIULAN: The body is just a house. The soul is the one who is living there.

DAVID: And that is who we are…the soul.

XIULAN: The soul not only comes once into the world, it comes many times. When you die, you cannot take anything with you, except the soul.

DAVID: So the purpose of life in this lifetime is to awaken to the fact that you are the soul.

XIULAN: It’s like this. Every person in this world has their purpose. Originally, I was working on the culture stuff. I was studying to be a movie director. But because of this disease, I got I started to wake up. Same as you. You produced a web site for waking up, but I am doing Qigong. After we wake up, we know what we need to do.

XIULAN: It is so for all of us…once we meet problems. It’s not a bad thing. It’s good for us. So we know that the purpose of us is to help human beings. That is our purpose. There is this man, very famous in Sweden. And now he has his problem. So I want to help him. He has a lot of power to help more people. He is very young. It’s difficult to find young people…the young generation. He came with me to China twice and now he’s started to change. Change completely…the mind…the soul. He started to learn from me to help other people, as a teacher.

DAVID: Does he have a Qigong practice? Every morning I do an hour of Kundalini Yoga. Do you have a practice every morning where you do Qigong?

XIULAN: Everyday we do the Qigong. So that we clean the channels. Every day. Then we become happy and we become positive.

DAVID: Do you usually do this in the morning?

XIULAN: Every morning, 4 AM, I start. And we have several different types of Qigong. So, we can even do that on the bed. We can either do moving Qigong or Qing-gong. That means you don’t have to move.

DAVID: Could you please define Qigong?

DAVID: It could be said that a lot of the challenges that Mother Earth is having right now, such as climate change, is because the masculine is running amok. We are too patriarchal. So my question is, when the chi comes down, does it help balance me as a male? So I am more male and female? Balanced?

XIULAN: Not “whether or not.” It definitely can. You know that police men have their own professional kind of disease. They always assume…suspect you of doing something. In China, I gave a class especially for police men. So Qigong helps to get energy from the universe to clean the channels. It’s not like they want to be like that originally. It’s that the profession, the work gives a lot of burdens on the left part of the brain. So they become like that.

David Welch: is the founder and CEO of Awaken Global Media and Chief Editor of AWAKEN.com.   He is one of the Producers of the award-winning movie “Peaceful Warrior” and a member of the Directors Guild of America and the Screen Actors Guild. David is a master practitioner of Neuro-linguistic programming, a certified Kundalini Yoga instructor and has a continuous, committed and daily yoga, meditation and Qigong practice.