by Stephanie Convery: A new exhibition at Melbourne’s National Gallery of Victoria puts the work of female Indigenous artists front and centre… 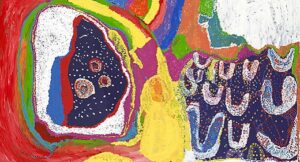 With more than 200 pieces by 118 Aboriginal and Torres Strait Islander women, Who’s Afraid of Colour? features paintings, installations, sculpture and textural work from some of Australia’s most important contemporary artists – some never before shown to the public. 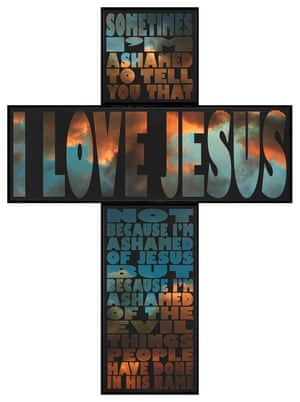 Wadawurrung. Bindi Cole Chocka started taking photos when she was a young girl after her mother bought her a camera and a developing kit. After a tumultuous youth, she landed in prison. She started studying photography soon after her release. 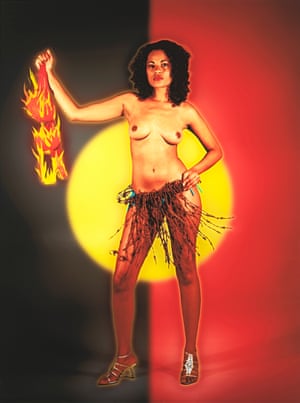 From the A Time Like This series. Cole Chocka came to national attention in 2011 when she was one of a number of Indigenous public figures to bring a class action against Australian commentator and writer Andrew Bolt for drawing into question her reasons for identifying as Indigenous. 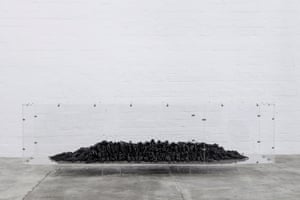 Kokatha/Nukunu. Blood on the Wattle is a full-sized perspex coffin filled with close to 300 glass yams.

Detail from Blood on the Wattle by Yhonnie Scarce 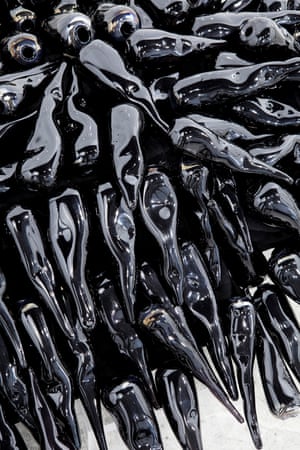 Yhonnie Scarce specialises in glass-blowing. Blood on the Wattle was exhibited as part of the 55th Venice Biennale in 2013. 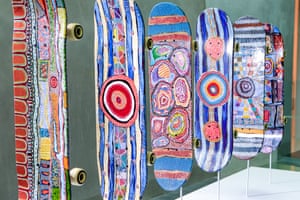 Lardil/Kayardild. Moodoonuthi is a 21-year-old artist, raised on Bentinck and Mornington Islands in the Gulf of Carpentaria. The designs on her work express her connection to country, and her bold, colourful style is influenced by her great-grandmother, May Moodoonuthi, and her great-aunt Sally Gabori, both well-recognised artists. 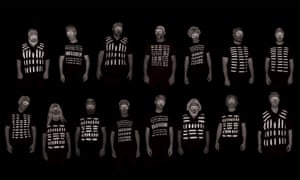 Mutti Mutti/Wamba Wamba/Yorta Yorta/Boonwurrung. Men in Mourning and its accompanying piece, Women in Mourning, represent the mourning practices of Indigenous people from the Murray-Darling region. The white marks on black T-shirts represent Clarke’s interpretation of the scars men wore to mark life events and the loss of a member of the tribe. 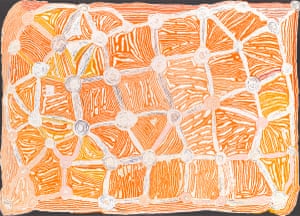 Ngipi Ward lived in the tiny remote community of Patjarr, on the edge of the Gibson desert in Western Australia.

Photograph: The estate of Ngipi Ward, courtesy of Warakurna Artists 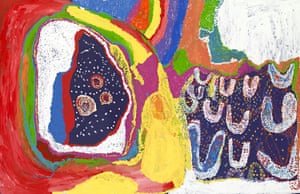 Kaiadilt. Kuruwarriyingathi Bijarrb Paula Paul is one of a number of women artists from Bentinck Island in the Gulf of Carpentaria. 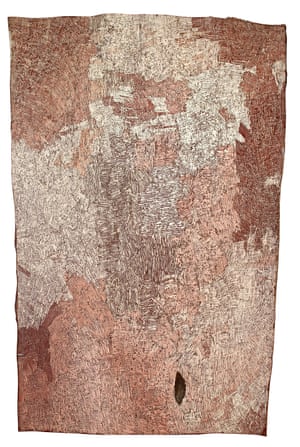 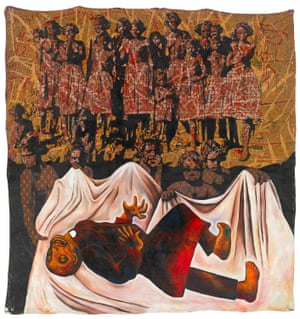 Badimia. Dowling’s work is often confronting and bold, drawing on Indigenous painting traditions alongside European portraiture and Christian iconography. This piece is comprised of synthetic polymer paint, earth pigments and blood on canvas.

Madarrpa. Nonggirrnga Marawili began her artistic practice with printmaking, before moving on to painting larrakitj (hollow wooden memorial poles, which contain the bones of deceased people and are used for ceremony) and on bark. This piece is comprised of earth pigments on stringybark. 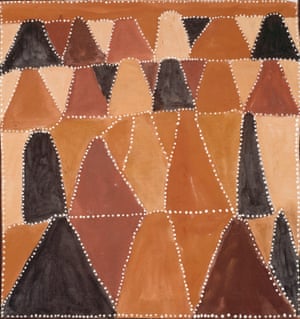 Gija. Queenie McKenzie lived and worked on the cattle station in the Texas Downs area in Western Australia. She was a stalwart community and political activist. She took up painting relatively late in life, producing a large volume of work in a very short time, much of it depicting the Texas Downs area, which she knew intimately.

Photograph: The Estate of Queenie McKenzie

My Country No Home: Nancy Kidd, Garrwa One Camp by Miriam Charlie (2015) 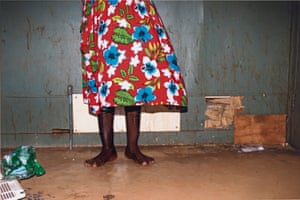 Garrwa/Yanyuwa. Charlie was born in the Northern Territory town of Borroloola and has lived there her entire life. My Country No Home is a series of photographs exploring the living conditions of the Borroloola community, and critiques the bureaucratic obstacles in delivering financial assistance to the region.

Anmatyerr. Born in Utopia c. 1910, Emily Kam Kngwarray was a prolific artist whose work shot to prominence in the late 1980s. Anwerlarr Anganenty (Big Yam Dreaming) is enormous – its dimensions are eight metres by three metres – but took the artist only two days to complete.

Anmatyerr. It is estimated that Emily Kam Kngwarray produced something in the realm of 3,000 works during her artistic career, before her death in 1996. 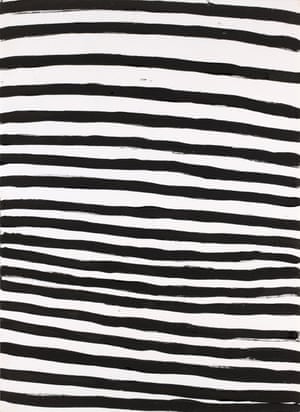 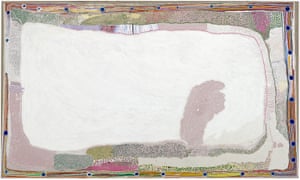 Martu. Ngayarta Kujarra depicts Lake Dora, a salt lake in the East Pilbara, Western Australia, the traditional country of the Martu people. Created by 12 Martu women artists over the space of eight days, Ngayarta Kujarra is a five-metre-high bird’s-eye view of the lake, which plays an important role in the Martu culture and community.