by Myisha Majumder: Solar has become a staple of the U.S. power generation mix in the last decade… 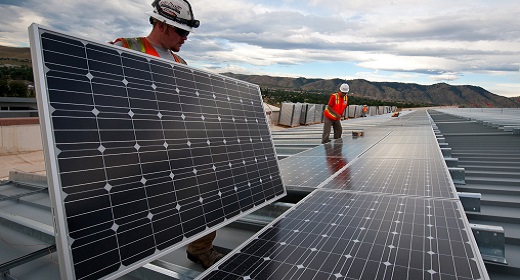 Now that the industry is maturing, it’s time to have a tough conversation: The solar industry needs to improve its circular practices.

Like any industry, the solar industry has unique machinery and equipment; specifically, its photovoltaic (PV) cells have silicon, metal, glass and plastic components that are melded together in order to create a functioning solar panel.

But these cells have a limited lifespan of about 25-30 years. Most component materials retain their value, however, and can be reused to participate in the circular economy, the economic system that aims to keep resources in use and eliminate waste.

The solar industry is still growing — the International Energy Agency predicts that total renewable based power capacity will grow by 50 percent between now and 2024, and 60 percent of that rise will be attributed to solar. Given this rapid increase and dependency on solar, Evelyn Butler of Solar Energy Industry Alliance (SEIA) emphasized that with increased capacity comes increased waste.

The IEA predicts that total renewable based power capacity will grow by 50% between now and 2024, and 60% of that will be solar.

“By 2030, with that much PV, there’s a potential of something like 8 million tons of potential PV waste,” Butler said. It’s also a global opportunity of about “$450 million in raw material recovery that could be leveraged for new industries or employment.”

The challenge is making PV waste recycling and repurposing more efficient than it is in order to move towards a more circular economy.

A more circular solar industry at the manufacturing level

Some of these opportunities arise at the solar manufacturing level. As Andreas Wade of First Solar explained, the energy-resource nexus is a top priority at First Solar. The company works throughout the production, deployment and maintenance parts of the solar industry. Since 2005, First Solar has been a part of an established global recycling and take-back program for its panels since 2005. To Wade, a major area of development for circular economy practices in the solar industry is repurposing materials used to create solar cells, such as crystalline silicon and aluminum.

But designing products for end-of-life in a way that the materials can be reused or repurposed can be a challenge. Wade described the apparent conflict: “We want to deliver a solution to our customers, which is out there in the field for 25, 30, 35 or even 40 years or longer. So design for recycling means for us that we try to make sure that we hit the quality, reliability and longevity marks, as well as making sure that we can recover the materials encapsulated and embodied in our PV module at the end of life in a high volume fashion.”

By considering circular economy practices from the onset of designing solar panels, materials can be more efficiently reused and recycled, rather than considered in hindsight at the end.

A more circular solar industry at the recycling level

For First Solar, material recovery goes beyond the traditional model of bulk recycling and recovering glass and aluminum, but also taking back the semiconductor system such that it can be reused in new panels. Wade claimed that First Solar is able to recover 90 percent of its panel’s semiconductor functions.

Butler echoed these challenges but said that manufacturers are beginning the process of overcoming them. In her experience so far at SEIA, Butler mainly has seen repurposing of solar materials that “have been damaged, either the weather events or logistics, or sometimes their installation.” This is in contrast to the traditional end-of-life planning First Solar is employing, but can still be a large number of materials that should be repurposed for sustainability. Other opportunities include companies standing as the middleman for selling excess modules from installers.

Other opportunities also include companies standing as the middleman for selling excess modules from installers.

Both Wade and Butler argued that such repurposing will be optimized only with outside pressure from the customers of such companies. Wade encouraged users to ask their providers questions such as: “What are you doing about circularity? Do you offer a recycling program? What are your recovery rates?” He believes specifying such questions in RFPs can drive the industry to the next level.

Tadas Radavicius of SoliTek added that there’s an opportunity for using circular economy principles for secondhand panels: “We see a growing market for secondhand panels just usually comes from utility-scale systems … you can look at the degradation rate, and you can identify for your potential client for how long these panels go, or how much the energy will be generated.” However, he explained that this is only feasible if there is clear communication about the history of the panels from one company to the next.

In addition, Radavicius noted that pressure on the policy level from the European Commission to incorporate the solar industry into the circular economy. Because of the competitive market in Europe, solar companies are frequently battling for bids and need to set apart from others. Participating in the circular economy and presenting sustainable practices often gives these companies an edge.

Radavicius also explained that increasing circular economy practices could enable Europe to function more independently in the industry. As Radavicus described: “If you could manage circularity in the rate that you can recover these materials, Europe can create its own local supply chain and can increase its supply of these materials, which usually comes from outside.”

The event highlighted key opportunities for the solar industry’s much-needed entrance into the circular economy. As Butler said, “There is a need to create the right infrastructure in order to realize that value creation, and to provide opportunities for materials to be recovered and re-utilized in some way, shape or form.”