by Kyung Lah: Close your eyes, and you know where you are: The unmistakable sound of anime voices and the jingle of a completed lap around the electronic track ring through the hall… 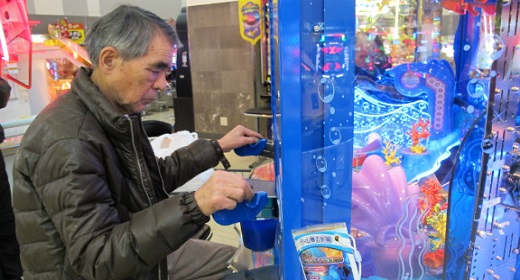 This is a classic video game arcade in Japan, filled with the sounds long associated with this gaming nation. But open your eyes, and the players are not exactly the teenagers you’d expect to find.

In the center of the Sega Corporation game arcade in a Yokohama mall, about a dozen graying heads bobbed in front of video consoles, dropping tokens into the machines. The median age was no where near pre-teen, but much closer to post-retirement.

The arcade industry, while still dominated by younger players, is shifting to an unexpected population reality in the rapidly aging nation of Japan. Japan’s government projects the population will shrink by a staggering 30% by 2060. By that year, the government says people age 65 and older will account for 39.9 percent of the total population. Crunch the numbers further, and seniors will outnumber children by 4 to 1.

The Kataokas, both 70, certainly feel the arcade is friendly for their age group. They come every other day. Teruo Kataoka plays about six hours. “It’s fun here,” he said, rarely taking his eyes off the video game. “It keeps my brain vibrant.”

His wife, Tsuneko, splits her time shopping in the mall and playing video games. “We’re bored. We have nothing to do. I don’t have anything to say to my husband anymore. It’s much better to come here than just sit in the house watching TV all day. We need some excitement, too,” she said. The Kataokas, like many of the gamer-retirees, prefer the more analog games at the arcade, which mirror more of the video slot machines in Las Vegas.

Drop the coin into the machine, and the machine slides a stack of coins toward the edge, and you can watch the coins fall, explained Teruo Kataoka. The more coins fall, the more games the seniors are willing to play, he said.

The arcade has so many grey headed gamers that it’s morphed into an unofficial senior center.

We met here, said one senior, pointing to the Kataokas.

It keeps my brain vibrant

Teenage players, who started filtering in after the school day ended, said they have no problem seeing so many older people in a traditionally youth-oriented spot. What would be weird, said one 16-year-old player, is if he saw a grandparent playing a shooting-or-combat game.

But there’s no telling what the future will look like in this arcade and other Japanese venues as this graying nation holds.